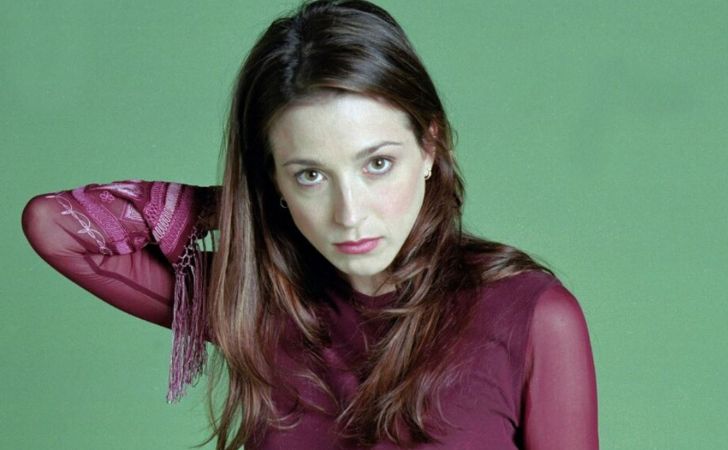 Marin Hinkle is a popular TV and film actress. She has appeared in numerous movies and TV series but is best known for her appearance in Once and Again, Two and a Half Men, The Marvelous Mrs. Maisel, and many others.

Well, in this article, we will talk about some interesting facts about her career, net worth, & much more.

Marin Hinkle Was Born In Tanzania

The Marvelous Mrs. Maisel actress Marin Hinkle was born Marin Elizabeth Hinkle on March 23, 1966, in the beautiful city of Dar es Salaam, in Tanzania. As of 2021, she is 55 years of age.

Talking about her parents, she is the daughter of father Rodney Hinkle and mother Margaret Hinkle. While her father is a college dean and teacher, her mother is a judge of the Superior Court of Massachusetts. Just for a fact, her dad and mom met while they served in the Peace Corps.

Her Family Moved To States When She Was a Kid

Though Marine was born in Tanzania, she spent just a few months of her childhood there. As per the reports, when she was merely four months of age, her parents along with her moved to Boston, Massachusetts.

She has since been living her life in the States. Besides, she also has a younger brother named Mark, who was born just 2 years after her parents migrated to the US.

Marin Hinkle has a strong academic background. She did her high school at Newton South High School. After finishing high school, she attended Brown University and eventually New York University’s acting program at the Tisch School of the Arts. She finished her graduation in acting in 1991.

Though she was born in Tanzania, she has an American nationality. Similarly, she belongs to the white ethnicity.

Marin Hinkle Is An Actress By Profession

As we said, Hinkle is a successful movie and TV actress. She made her acting debut with a 1994 movie Angie where she played Young Joanne. Soon after that, she also made her TV debut in Another World in the years 1995.

She has since played important role in numerous movies and TV series. Some of her popular films are I’m Not Rappaport, Sam the Man, The Next Big Thing, Friends with Money, What Just Happened, & so on. Moreover, she was widely appreciated for her work in Jumanji: Welcome to the Jungle, Jumanji: The Next Level, which was released in 2017 and 2019 respectively.

Talking of her TV appearances, she has made plenty of them. Her major TV role came in Two and a Half Men in 2003. In the series, she played one of the lead Judith Harper-Melnick, until 2015. Likewise, she is also famous for her work as Rose Weissman in The Marvelous Mrs. Maisel, where she is a regular cast since 2017.

Further, some of her other works include Law & Order, Law & Order: Special Victims Unit, The Book of Daniel, Grey’s Anatomy, to name a few.

Did Marin Leave Two and a Half Men?

She appeared as a series regular in the show and played in a total of 83 episodes from 2003 to 2015. In the series, she starred alongside other casts that include Charlie Sheen, Melanie Lynskey, Ashton Kutcher, and others. Her final appearance was in the season 10 episode named “Big Episode. Someone Stole A Spoon“.

She has not revealed the reason she quit the show but reportedly her character was simply put out of the script after the 10th season. Besides, there are also rumors that she left the show because of work commitments.

Along with leading a successful career, Hinkle also leads a beautiful marriage. She is in a marital relationship with her husband Randall Sommer. They married in June 1998, in a private wedding ceremony.

It has now been over 30 years since they tied the knot and are still going strong. So far, there have been no reports of conflicts or extramarital affairs from both sides.

But how did Marin meet her spouse, Randall? Well, as per the reports, they first came across back in 1992, on the sets of a play where Randall directed her. It didn’t take them long to get to know each other and they soon began dating.

Well, we hope, the duo leads their relationship the same way in the days to come.

Her Husband Has Never Made Any Public Appearance

Well, it is unusual for a celebrity spouse being away from the limelight but Marin’s husband Randall is one of the very few. So far, her hubby has maintained complete privacy and not a single photo of him is available in the media. Also, since he does not attain any public gatherings with his spouse, his identity has remained discreet.

Does She Have Any Kids?

Not many know but Marin is also a mother. From her marital relationship with her spouse, she has a son. But unfortunately, she has not revealed the birth date or any details about her kid in the media.

It looks like the couple does not want to hinder their kid’s privacy. That said, we hope to see her son in the media someday.

As an actress, Hinkle is pretty rich. AS of 2021, she has a net worth of around $3 million, as per Celebrity Net Worth. Needless to say, but she makes most of her money from her movies and TV appearances. Talking of her salary in Two and a Half Men, she charges somewhere around $500,000 per episode of the show.

Despite being a popular celebrity, she is not on any social media platforms. However, there are a few fanmade pages of her on Facebook. So far, she has not revealed the reason she is not on socials. Looks like Hinkle is not a big fan of virtual worlds like Instagram and Twitter.

What Happened To Natalie Nunn? Her Cheating Rumors, Husband, Children