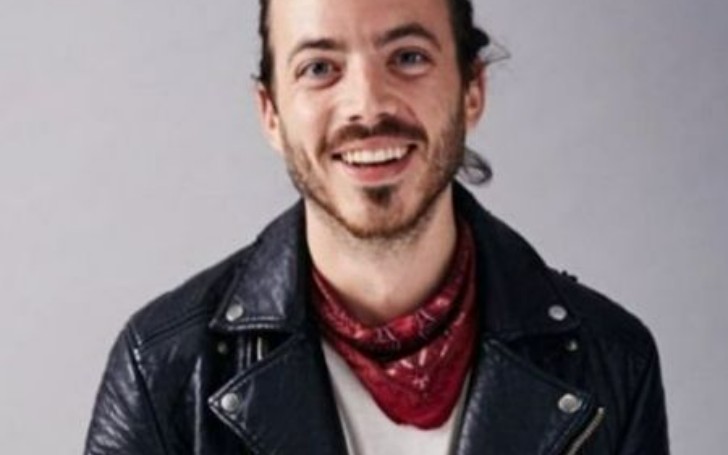 Tyler Gustin is a New York-based photographer and art director from Southeast Virginia who has already worked with some high-profile clients such as Warner Brothers and Vice Magazine. He has also created his own photo gallery under the name ‘TYLER GUSTIN PHOTOGRAPHY,’ where Gustin sells his works.

Apart from his photography, Tyler is the older brother of the CW series The Flash star Grant Gustin. His brother is an actor and singer better known for his work on the Fox series Glee. He has also one more sibling, a sister Grace. Let’s also find out who are his parents?

Here is everything you need to know about Tyler!

How Old is Tyler? His Complete Bio

Tyler Gustin is 34-year-old now. He was born on 1st Feb 1988, in Norfolk, Southeast Virginia. Growing up in his hometown of Norfolk, the celebrity sibling belongs to American nationality and has a Caucasian ethnicity.

Talking about his education, Gustin went to Old Dominion University, a public research college located in Norfolk, Virginia. Following his graduation, Tyler moved to New York City to pursue his career in photography.

Who Are Tyler Gustin’s Parents?

He is the son of Tina Haney and Thomas Gustin. His mother Tina is a pediatric nurse who is also a teacher at ECPI University in Virginia Beach.

On the other hand, his father Thomas is a college professor who has been a faculty member of the same college his wife is a teacher at since Feb 2017. He also served as an adjunct faculty member at ECPI for over a year from Jan 2016 to Feb 2017.

Prior to joining ECPI, Thomas previously worked for Bryant & Stratton College for over six years, playing multiple roles from adjunct instructor to faculty member. Between Sept 2005 to May 2010, Gustin was also a sales manager of Virginia Stage Company.

Siblings: Tyler is the Older Brother of Grant Gustin

As we mentioned above that Tyler has two siblings, a younger brother Grant and a sister named Grace Gustin. His sister graduated from Maury High School in Norfolk.

Needless to mention, all of the Gustin siblings are incredibly close to each other. Their proud mother Haney once said that both Tyler and his sista Grace “have been supportive of Gustin, who was home during the holidays.”

Back in Jan 2020, Tyler posted a beautiful photo of his young bro Grant and his wife Andrea LA Thoma on Grant’s 30th birthday. He wrote,

“Happy birthday brother, I love you. Welcome to the 3-0 club.”

His Brother Grant Played Barry Allen in The Flash

Grant Gustin gained wide popularity following his iconic role in the superhero The CW’s TV series The Flash. He plays the role of Barry Allen, a crime scene investigator in the series. His work on the project also earned him several accolades including three Teen Choice Awards and more.

What Does Tyler Gustin Do? His Career as a Photographer

Tyler is an accomplished freelance photographer, based in New York. He is also an art director with a passion for creating and storytelling via imagery.

Along with his strong passion, Tyler who always had a knack for photography gradually started putting his knowledge to specialize in commercial photography and portraits.

Additionally, Gustin has photographed for numerous reputed clients like Warner Brothers and Vice Magazine. He also has his own online shop called TYLER GUSTIN PHOTOGRAPHY.

On his personal website, the photographer wrote whenever he is from his client, “I can often be found riding my bike around town, snapping shots of the New York architecture, interesting people I run into, or anything that catches my eye. I have a specific interest in capturing the human condition as well as the unique landscapes around me.”

Besides, Gustin also regularly shares his photography on his Instagram account which has over 79k followers as of 2022.

Unlike his professional life, Tyler has remained secretive when it comes to his love life. Although he has posted a number of photos of girls on his Insta, he has yet to mention any one of them as his girlfriend or wife.

Furthermore, there aren’t any official websites that reported whether or not Tyler is married.

In the meantime, his brother Grant has been in a beautiful marital relationship with Andrea LA Thoma since late 2018.

Being an accomplished photographer, Tyler Gustin, with no doubt, has racked a good fortune from his creative works. And talking about his net worth, he has $500,000 in 2022.

Besides, his brother Grant who is 6 ft tall has a net worth of $5 million.

Who Is Mia Ortega? Untold Details On Jenna Ortega’s Sister