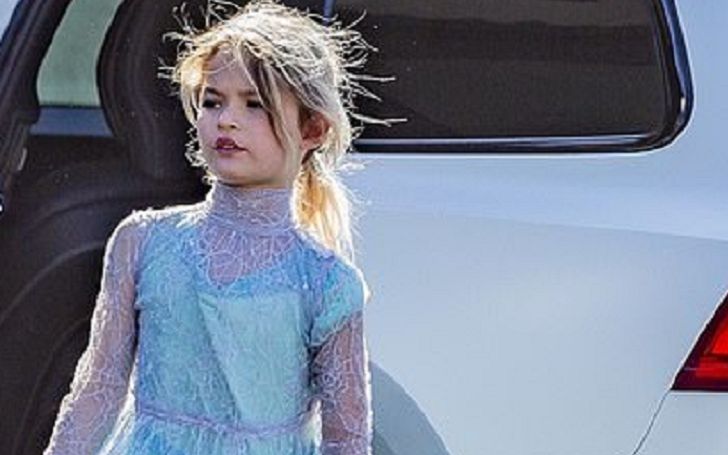 Noah Shannon Green is a popular star kid who has been into the limelight as the oldest child of Megan Fox and her TV actor husband Brian Austin Green. His parents were in a long-term marital relationship before they went their separate ways.

Noah has two younger brothers too including Bodhi Ransom. The Green brothers are now enjoying their wonderful upbringing together. But their parents have kept them a little bit out of the public.

Well, in today’s article, take a closer look at several unknown details of Noah, including his dressing confidence, gender rumors, and many more! In addition, we will also find out how is the relationship between Noah Shannon Green’s parents?

How old is Noah Shannon Green? His birth news came out a week after his birth

Noah is 10 years old as of 2022. He was born on 27th September 2012, in the United States of America. However, the doting mother Megan only revealed the news of her baby’s birth over a week after on her Facebook on 7th October.

“We have been very lucky to have had a peaceful few weeks at home, but I would like to release this myself before others do. I gave birth to our son Noah Shannon Green on September 27th. He is healthy, happy, and perfect.”

“We are humbled to have the opportunity to call ourselves the parents of this beautiful soul and I am forever grateful to God for allowing me to know this kind of boundless, immaculate love.”

Noah’s mother revealed her pregnancy when the Transformers actress was seen flaunting her baby bump in Hawaii along with her hubby in June of 2012.

The baby boy didn’t make any appearances until he was six-month-old. He was spotted for the first time with his father Brian in New York on 29th March 2013. The actor was seen strolling with his baby at the time.

Has two other younger siblings

He has two younger brothers named Bodhi Ransom Green, born in 2014, and Journey River Green, born in 2016. Besides, Noah also has an older step-brother Kassius Lijah from his father’s previous marriage with Vanessa Marcil.

Besides, Noah is currently at an Elementary School.

Which Nationality Does Noah Belong to?

He has an American nationality and as far as his ethnicity is concerned, the celebrity kid is of mixed ethnical background as his mother Megan is of Scottish, German, French, and Scots-Irish descent while his father belongs to Scottish ancestry.

If you belong to a family of celebrities then popularity will automatically come to you. The same case goes for Noah, the son of actor-parents.

His mother Megan is an actress and model. She has worked in many hard-hit movies that include Transformers, Transformers: Revenge of the Fallen, and Teenage Mutant Ninja Turtles as well. The prominent entertainment personality also has worked on several TV shows; some major projects are Hope & Faith, New Girl, and more.

On the other hand, his father Brian also has a great career in the field of acting. He gained wide popularity after his major role as David Silver on the TV series Beverly Hills, 90210.

His choice of clothing has made a series of headlines in the past. In an interview on an episode of The Talk, Noah’s mom Megan Fox opened up about her son’s dressing sense. She said that her ten-year-old boy is already into fashion. The interesting thing is that he often receives bad comments about his dress from his schoolmates, but he doesn’t care.

The actress further said she is, “trying to teach him to be confident no matter what anyone else says.”

Additionally, Fox said when she asked her son about his school day, “How was it? Did any of the friends at school have anything to say?’” Noah replied “Well, all the boys laughed when I came in, but I don’t care, I love dresses too much.’”

Defending the decision of his son to wear whatever he wants, his father Brian also told in an interview with Dax Shepherd in a podcast,

“I’ve heard from some people that they don’t agree with him wearing dresses. To them I say, I don’t care. He’s 4 and if he wants to wear it then he wears it.”

“And it’s dresses or goggles or slippers or whatever. It’s his life, they’re not my clothes. He’s not harming anyone wearing a dress. So if he wants to wear a dress, good on him.”

As per Megan Fox’s recent 2022 interview, it looks like her son Noah’s school bullying is yet to be over. The actress opened up to Glamour UK that her child still “suffers” from bullying at school.

Fox stated that she does “have a child that suffers. I have a lot of worries about that, because I just wish that humanity was not like this.”

Megan and her ex-hubby Brian Austin Green’s love story was full of drama. The couple first came across while they both were working together on the set of Hope & Faith in 2004. She was just 18 at the time while Brian was 30. Due to the age differences, the actor initially felt awkward dating but with time and mutual understanding, these things never became a barrier.

After a few years of their relationship, they got engaged in November 2006. However, the two reportedly called off their engagement in Feb 2009. Sources reported the two again engaged in 2010. In the meantime, Fox told that the couple had already been engaged since 2006.

For their marriage, they finally tied the knot on 24th June 2010. The couple’s low-key wedding ceremony was held at Four Seasons Resort Hualalai at Historic Ka’upulehu on Maui. It was officiated by a local kahuna, a Hawaiian priest. They walked down the aisle in front of their only witness Kassius (Brian’s son from his previous relationship).

Fox wore an Armani Privé gown while her husband opted for an all-white Emporio Armani ensemble for their big day.

They separated a second time after their first reconciliation

Megan’s relationship with her husband Brian was full of ups and downs from the beginning. They first went their separate ways in 2015. Fox even filed for divorce in August of the year. But they got back together the following year. They also welcomed their son, Journey in 2016.

Despite their reuniting, the couple’s relationship didn’t sustain for long. It was announced in May 2020 that the duo went their separate ways. The actress filed for divorce from her spouse Green for the second time in November.

With Whom Does Noah Shannon Green live after his parents’ separation?

Noah’s parents’ divorce processing came to an end in Feb 2022. Following their divorce finalization, Fox and her ex-spouse Brian shared joint legal and physical custody of their children.

So, it is safe to say that Noah and his two other siblings will spend their time with both of their parents.

Who are Noah’s parents dating currently?

Fox is now dating her musician boyfriend Machine Gun Kelly, a rapper. The two also engaged in early 2022. Ever since the pair got into a relationship, it has become one of the most heated subjects

Both MGK and Megan Fox are quite something. From their over-the-top dresses to their body language, the couple has been in the news since they started dating.

Meanwhile, Noah’s dad Brian is currently in a relationship with Sharna Burgess. The lovebirds are in a relationship since 2020. Then in February 2022, the pair announced they are expecting their first child together.

Subsequently, they went on to welcome their first child, Zane Walker Green on June 28th, 2022. The couple is happily enjoying their relationship.