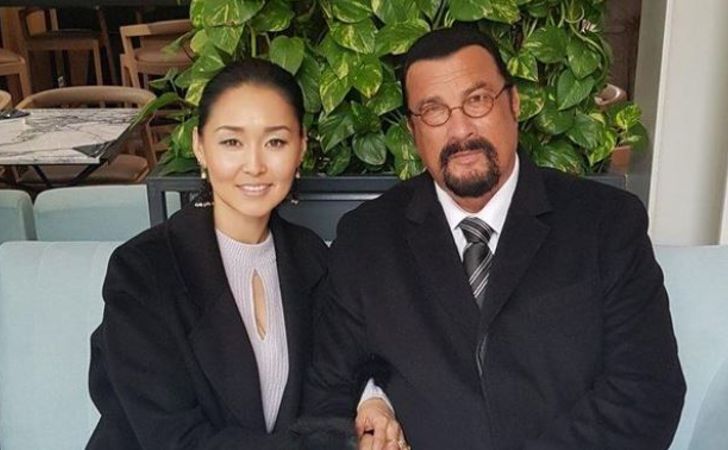 Erdenetuya Seagal, born Erdenetuya Batsukh, is a Mongolian-American dancer, who goes by her stage name Elle. She is mostly known as the wife of American actor, producer, Steven Seagal.

With a specialization in ballroom dancing, she has earned decent recognition in the industry. In fact, she holds the tag of the top female dancer in Mongolia, which was during the peak of her career.

Besides, as the fourth wife of the popular actor, Erdenetuya has been leading a beautiful relationship along with her children. In this article, we are going to talk in detail about her career, marital relationship, her children, net worth, and more.

Erdenetuya Seagal Is The Fourth Wife of Actor Steven Seagal

As we mentioned above, Erdenetuya is successfully married to actor and screenwriter Steven Seagal. The couple married in 2009 and have since been together.

While they tied the knot in the late 2000s, they met back in 2002 when Steven visited Mongolia to reportedly raise money to make a movie about Genghis Khan, the founder of the Mongol Empire.

After their first meeting, Erdenetuya worked as an interpreter all the while Seagal stayed in Mongolia. Later, she even worked as his assistant for over 5 years, during which they fell in love.

They even welcomed a son together from their relationship. Their son Kunzang Seagal was born on September 17, 2009.

Erdenetuya Seagal Is the Step-Mother to Steven’s Six Children

Kunzang is the only child born to Erdenetuya, but she is the step-mother of her husband’s six kids from his previous relationships.

As we mentioned earlier, her spouse was married thrice before her. He was first married to Miyako Fujitani, with whom he has two kids, a son, Kentaro Seagal, and a daughter, Ayako Fujitani. While Kentaro is an actor, Ayako is a writer and an actress as well.

While still married to Miyako, Steven started an extra-marital relationship with actress and model Kelly LeBrock. They married in 1987 and got a divorce in 1996. Steven and LeBrock even welcomed a daughter Annaliza Seagal in 1987 and their son Dominic Seagal was born in June 1990. They also had a daughter Arissa LeBrock, who was born in 1993.

Prior to LeBrock, he briefly married Adrienne La Russa in 1984. However, they annulled their marriage the same year since his divorce from his first wife was not finalized by the time.

Erdenetuya Seagal Was Into Dancing From an Early Age

Born in Mongolia, Erdenetuya developed an appetite for dancing at a very early age and soon started training at the ‘Children’s Palace’ in Ulaanbaatar, Mongolia.

After finishing her graduation, she decided to pursue a career in dancing professionally. Very soon, she gained recognition as a ballroom dancer and became one of the top female dancers in Mongolia.

Besides, she has also been a part of several dancing contests, standing as the winner in many of them.

She Has Appeared in Many Movies

Apart from dancing, Erdenetuya Batsukh, aka, Erdenetuya Seagal, also tried her hand in movies and TV. However, she only got an opportunity to make her debut as an actor after meeting with Steven.

She made her debut with the biographical TV series documentary titled E! True Hollywood Story, in 2002.

Later, in 2019, she made her major appearance as an actor in the American action film General Commander. In the movie, she played the character named Tuya Alexander, alongside her husband. The movie was released on May 28, 2019.

The 69 years old Steven Seagal is a successful actor, producer, screenwriter, and martial artist. Starting as a stuntman in the 1982 film The Challenge, Steven appeared in many other movies both as a stuntman and an actor.

He made his debut as an actor in the 1988 film Above the Law, also as a producer. Thereafter he appeared in films like Hard to Kill, On Deadly Ground, Executive Decision, Half Past Dead, Clementine, and a number of other movies.

Just recently in 2019, he appeared in General Commander,  and Beyond the Law. Talking about his TV works, he worked as a host of Saturday Night Live in 1991. Later, from 2009 to 2014, he was the executive producer and co-creator in Steven Seagal: Lawman.

Later, from 2011 to 2012, he appeared in True Justice, also as a director, executive producer, and writer.

She Is Not Active on Social Media

Though Erdenetuya Seagal is a successful personality, she is not active on any social media platforms. However, she appears on her husband Steven’s Instagram. The couple seems to share a good relationship, which is pretty visible on Steven’s social media posts.

As of 2022, Steven has over 425k followers on his official Instagram account where he goes by @seagalofficial. Moreover, he is also active on Twitter with over 108K followers.

Erdenetuya lives a pretty luxurious life along with her husband. The couple lived in a rugged 12-acre estate in Scottsdale, Arizona, which they put for sale for $3,775,000 in 2019. The beautiful 2001-built house reportedly features five bedrooms, 5.5 bathrooms, in nearly 9,000 square feet.

As of 2022, Erdenetuya Seagal’s spouse Steven Seagal has a net worth of $16 million as per Celebrity Net Worth.