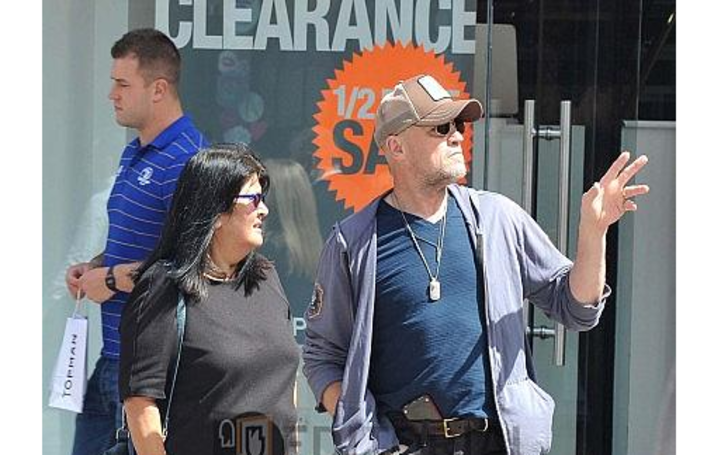 Margot Rooker is the wife of Michael Rooker who gained breakthrough recognition for portraying Yondu in the Guardians Of The Galaxy franchise. Margot, herself used to do a lot of acting in theater plays. Together, Michael and Margot are parents to two daughters.

These days it appears Michael’s wife is busy being a housewife and supporting her daughters in their careers. But is she still married to Michael? Why the couple doesn’t appear by each other’s side more often?

Know answers to all these along with some other details regarding Margot Rooker down in the content below.

Margot’s full name is Margot Tsuru LaRose. Sources claim she grew up in New Jersey. Some also claim she used to be a chef. Her birth date is a mystery to date.

In September 2019, Margot was seen on her daughter, Gillian’s Instagram. Gillian had just got a visa to study in Japan.

Margot Rooker And Her Husband, Micahel Rooker Have Been Together For Over Four Decades

Margot and Michael have been married for over 40 years. The couple married on 22 June 1979. In the first ten years of her marriage with Michael, Margot would lose her mother-in-law, father-in-law, and brother-in-law. The pair haven’t made many appearances by each other’s side.

They are yet to share the details with respect to their early romances; how they met or even the Infos about their wedding. In fact, Margot is, among the Hollywood wives, who has maintained utmost secrecy around her personal and professional doings.

Together, the couple was last spotted shopping on August 6, 2015, in Dublin. Two years later in June 2017, Margot and her husband stopped by Knuth’s Brewing Co. in downtown Ripon.

Margot Rooker’s Eldest Daughter Has A Family Of Her Own

The Rooker couple’s eldest daughter lives in LA, California, and has a daughter of her own. Margot and Michael’s youngest daughter, Gillian, a chef, was born in Los Angeles, California.
She studied at Verdugo Hills High School and finished college at the University of California, Santa Cruz graduating in Earth science. Gillian also studied at Natural Gourmet Institute. She lives in Okazaki, Aichi.

Her Husband Has Been In The Film Industry Since The 80s

Michael’s other film credits include Cliffhanger (1993) opposite Sylvester Stallone, Keys to Tulsa (1997), in which he stars with Eric Stoltz and James Spader, and The Bone Collector (1999) alongside Denzel Washington and Angelina Jolie.

On TV, Rooker has played in an episode of Showtime’s noir series Fallen Angels as well as a recurring role in Miami Vice and a guest appearance on CBS’ The Equalizer.

The actor is also known for his role as “Walking Dead” villain Merle Dixon. He starred in a very dark experimental film titled Henry (1986).

Margot’s partner received international fame after his portrayal of Yondu in the Marvel Studios film Guardians of the Galaxy.

After passing high school, he became a Chicago Park District athletic instructor and learned aikido, Japanese defensive martial art that teaches its students to use principles of passive thinking and centering in their daily lives. The Henry star holds a black belt in the Kyokushin style of karate.

Michael wound up at Wright Junior College from where he graduated with an associate degree in a field. He later passed out from Goodman School of Drama with a degree in theatre. Margot’s husband also studied at the Theatre School at DePaul University.

In January 1990, while talking with the Chicago Tribune, Margot’s husband said he liked playing people on the edge characters who are on this line where they can do great damage or great heroic deeds. He added people can all be dangerous at certain times.

He also explained how he grew up with dangerous people and said that he knew how they act.

Rooker grew up at Division and Ashland and his family moved three or four times in that neighborhood, depending on which rent was cheaper. It was hard for his parents to feed six kids on welfare, and there were drive-by shootings and gang-bangers.

But that makes you strong and uncompromising, said the Guardians of The Galaxy star.

The actor revealed in a series of Instagram posts that he self-isolated in his Airstream, away from his family, while getting rid of COVID-19. He included a photo showing he tested negative for COVID-19 on Sept. 4, 2020.

The 66-year-old actor wrote it had been quite a battle. He added the real battle takes place internally, on a cellular level.

Rooker said he opted not to self-administer “any extra medicines or vitamins or supplements” during his recovery because he worried they might damage his kidneys and liver.

Remembering the time Margot’s spouse said he could feel and see the results of those daily battles, by how he felt and looked the next day. He remembered either feeling like crap, or Pretty “dang good” and sometimes, semi-human.

He shared a follow-up photo Sunday displaying himself mock-crying over a cracked martini glass.