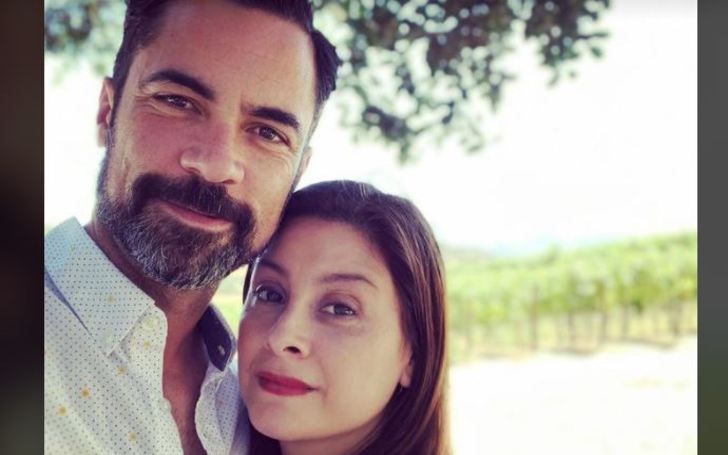 Lily Pino is the wife of actor, Danny Pino who is known as Detective Scotty Valens on the CBS series Cold Case (2003 to 2010), and as NYPD Detective Nick Amaro in the long-running NBC legal drama Law & Order: Special Victims Unit from (2011 to 2015).

Pino has been married to her actor husband since 2002. She is also the mother of his two children. And the couple’s relationship has been quite strong for over three decades starting as far back as their adolescence.

So who exactly is Danny’s wife, Lily Pino. Is she also an actress? How did the actor meet his now longtime love? Also, who was Lily prior to being in a relationship with the famous TV star? Know all these in the sections below.

Pino (originally, Lily Pino Bernal) was born on October 8, 1974. Lily is yet to disclose any further information on her family history. Her parents, though are very much believed to be an immigrant from Columbia. In fact, she herself is assumed to have moved to the states from the South American nation. She also at least has one younger brother, Jorge Bernal who advocates recycling things from the landfills.

Pino Is An Actor

So far, Pino has only made one film appearance albeit a short movie. She played the character of Rosa’s mother in William Olsson’s directorial 12-minute movie, Rosa.

Lily married her husband, Danny in 2002. The Latino couple has known each other since middle school (Rockway).

In an interview with Closer Weekly in May 2019, Lily’s husband remembered the first time he met his future wife.

“My wife and kids are the most important thing in my life. Lily and I actually met in middle school. We’re just celebrating our 17th wedding anniversary, but we’ve known each other for almost 30 years. It’s crazy!”

Lily and Danny, however, began their relationship when the latter began pursuing a career in acting. For a while, the duo tried to work on their long-distance relationship.

Lily And Her Husband Danny Appeared In College Play

Lily and Danny, the schoolmate turned husband and wife also did a play together when they both were in college. When the future Cold Case actor was a pupil at Florida International University, theater department, the then-struggling thespian needed to take off the corset of a fellow actress for a scene. The co-star was none other than his future wife, Lily.

Adding awkwardness to the moment, Danny’s in-laws were also present among the audience at the time, Lily’s husband recalled with FIU theater.

The parents of two also did at least one another play titled, Fiddler on the Roof, where Lily portrayed Hodel and her husband played Perchik.

She Is a Mother Of Two Children

Together, Pino and her husband are parents to their two sons, Julian Pino, and Luca Pino. Lily’s Cuban-American partner tells that his wife and kids are the reason he continues to be humble and grounded. Their first, Julian was born on June 5, 2007, while they welcomed Luca on February 15, 2006, at a Los Angeles area hospital.

Both the duo share a great relationship with their kid and hope their bonding continues.

The father of Lily’s children, Danny Pino became a well-known face for his role as Nick Armano in NBC’s tentpole and the longest-running show, Law, and Order: SVU. The star, however, has nowhere to be seen in the series for quite some time; departing after the 16th season.

Allegedly, Danny’s decision to leave the series stemmed from his own desire to pursue other projects. Subsequently, the star and showrunner, Warren Leight, agreed and wrote him out of the show.

Due to the mistake done by the actor’s character, the writers couldn’t justify a promotion, so they simply transferred out Nick, both on and off the storyline.

However, that statement changed when in September 2021 Wolf Entertainment announced that Danny was returning to the show for its 500th episode. Though the show creative team didn’t reveal any further information.

What’s more, even Lily, herself had announced the news of her husband’s return on her Insta handle.

Is Pino’s Husband In Mayans Season 3?

Season 3 of FX’s drama series, Mayans MC premiered in March 2021. And with that, some viewers were looking out for Miguel Galindo (played by Danny Pino). Although the actor did appear for the third season, he was without his signature beard. That is subsequence led many viewers to question if some other actor replaced Danny’s character.

While the show’s creative team gave no specific reason for the change, certain lines of dialogue did provide some context why Galindo had no whiskers. One of the first few episodes from the third season of Mayans explains Galindo is cheating on Emily (Sarah Bolger) with Mexican governor Sederica Palomo (Mia Maestro), leading to a moment where she thanks Galindo for shaving.

Some henceforth have been concluded that Galindo cleared out his facial hair at Palomo’s request.

What Is Lily Pino’s Net Worth?

Considering the fact that the Hispanic wife of Danny Pino hasn’t made that much of a name especially in the media industry, it is quite difficult to answer her financial specifics. Until and unless she decides to get fully into acting and finds a breakthrough for herself, it will be a while (and significantly rigid) to decode the figures behind her net worth.

On the other hand, Lily’s better half, Danny’s fortune has been credibly estimated at around $3million or so. While there hasn’t been much discussion with respect to the actor’s TV money, some analysis nonetheless suggests he has raked from as low as tens of thousands to hundreds of thousands of dollars per episode — all the while having acted in more than a dozen of series.

Some Other Facts About Lily Pino