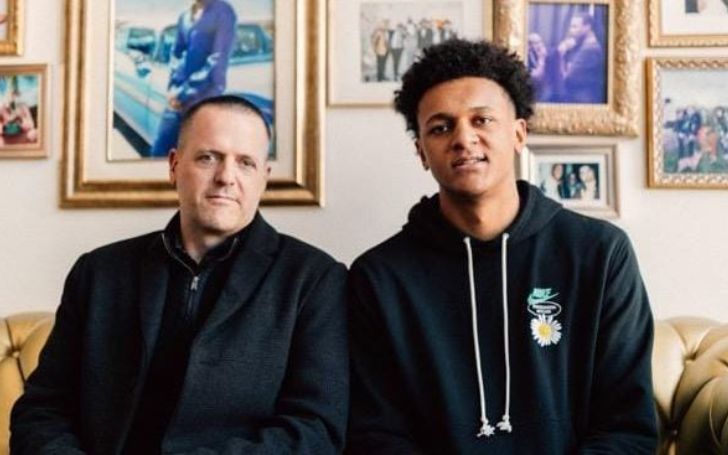 The emerging NBA player, Paolo, and ex-University level champion, Rhonda might now overshadow the Banchero patriarch, Mario, however, in the past, he too had quite a name as an athlete. Despite that, he chose to discontinue his playing career and is now busy being by the side of his children and handling a considerably good business.

Learn further about Rhonda’s husband, Mario; starting from his parents, and ethnicities, to his relationship with his longtime partner, their children, especially Paolo, and also his business; what exactly he does for a living.

Mario Banchero Is From Seattle Washington; Where Was He Born?

Rhonda’s husband and Paolo Banchero’s father – Mario Banchero was born on April 16, 1974. While it is a bit unclear where exactly Banchero was born, he claims to have grown up in Seattle, Washington. He is also a very long-time local of the place.

Although Mario never misses mentioning and admiring his father, only a few times has he talked about his mother who was back in June 2017 on his Facebook.

Mario Banchero Is An Italian By Ethnicity; His Son Is Also An Italian Citizen

Mario’s ethnicity predominantly includes Italian. His ancestors were from the northern side of the country. His great grandparents immigrated from Italy to the United States at the turn of the 20th century (1900). In their home nation, they were coal miners in Black Diamond and also farmers.

Banchero’s great grandfather however never had naturalization in the states. Because of this, Mario’s first son, Paolo was able to receive Italian citizenship. He officially became an Italian in Feb 2020.

“They (Italian Basketball Federation) reached out a couple of years ago about the possibility.”

Once they approached Mario, he filled up the form, and eventually, Paolo became an Italian citizen.

Mario Banchero met his wife Rhonda Smith Banchero when they were both athletes at the University of Washington.

At the time Rhonda was a senior and interestingly she and her future husband, Mario grew up a few blocks from each other. Furthermore, they also attended the same school but never happened to cross each other’s paths.

Addressing that, Rhonda once in an interview said,

“I must have looked right over him because he was a late bloomer.”

As mentioned, Mario’s wife, Rhonda was a champion athlete competing in basketball.

She was a collegiate basketball player for the Washington Huskies Women’s basketball team. Rhonda in fact had quite a reputation among the viewers and coaches in her time for making several milestones. At the conclusion of her college career, Mario’s spouse had a total of 2,948 points and 803 rebounds.

In 2000, Rhonda also became a third-round selection in the WNBA draft after which she was a professional player overseas and in the American Basketball League.

While she long left a career in pro sports, Banchero’s wife now focuses her time working towards the greater good. Rhonda apparently spends her time at a nonprofit organization to help the homeless. She, at the same time, also treats addiction and mental illness.

Mario Banchero Put Some Thoughts Before Proposing To His Wife, Rhonda

Mario and Rhonda’s story of the marital journey started around the late 90s. It was presumably in 1999 – with Mario asking Rhonda to marry him in Feb that year.

For the proposal, Mario, in his 20th wedding anniversary video, revealed he took a page out of Fox’s comedy TV show. He said he was inspired by how the show’s titular character, Martin proposed to Gina. Mike at the time was working near Green Lake, Seattle. He thought it would be the place where he will ask Rhonda to marry him.

Apparently, the lake was also where his father proposed to his mother.

The day Mario asked Rhonda to marry him, the latter’s parents were expecting to meet him and his parents as well. However, since the Seattle native worked at Green Lake he had to wait till evening to attend the meeting. After he was done with the work, Mario decided to finally make the move by calling Rhonda at the lake.

So the Washington-born told the Husky Hall of Fame 2004 that his car wouldn’t start and that Rhonda had to come by the lake and pick him up.

Rhonda agreed and after she arrived at Green Lake, she and Mario started walking around it. And after some time, one of Banchero’s friends came up with flowers to pass him on but without the knowledge of Rhonda. It was something that Mario had planned ahead.

Banchero Proposed To Rhonda With A Lot Of Spontaneity

The grandson of Italian grandparents, Mario apparently wanted everything for the proposal at his disposal whilst he was talking with his future wife. And for this, he had asked for help from a few of his friends and his brother a couple of days earlier.

Included in the plan was background music by Mario’s guitarist friend who, for Rhonda, once again seemed out of the blue. As soon as the music went into play, the college football player turned entrepreneur took the ring out of his pocket and the rest is history.

The now 48-year-old Mario and his wife Rhonda married in July 1999.

The couple, Mario and Rhonda after their wedding, welcomed three children. In addition to Paolo, the Banchero pair also has one more son, Lio, and a daughter, Mia. The last two are both younger than their NBA player son, Paolo.

Mario’s first son with Rhonda, Paolo is six-foot-ten-inches tall and is Orlando Magic no 5.

Since Mario and his wife, Rhonda were both athletes at their younger ages, they apparently influenced their son, Paolo’s career and understandably even facilitated him with a lot of help.

Paolo, however, in his interviews, has stressed his mother, Rhonda’s rigor in addition to her past experiences as an athlete played a significant role in helping his career get to where it is now.

Initially, Mario and his wife’s first child, Paolo, was a freshman quarterback at his father’s O’Dea High School. He, later, however, changed his career to basketball from football.

Banchero Son, Paolo Also Had An Option To Play For Italy

Aforesaid, since he became an Italian citizen in Feb 2020 at age 17, the Italian Basketball Federation also contacted him for Italy’s EuroBasket qualification games the same year. Mario’s eldest son, however, opted not to play.

Paolo nonetheless said he would like to play for the Azzurri in international competitions in the future. The 19-year-old power forward still is always proud of his father’s Italian heritage and even displays the country’s flag on his social media handles.

Mario and Rhonda’s eldest son, Paolo shocked everyone in June 2022 when he became a no 1 overall draftee of the Orlando Magic. Banchero’s son, Paolo was also the best player on North Carolina’s Duke University Blue Devils basketball team.

Mario Other Children Are Also Into Sports

The ex-WNBA champion, Rhonda, and her spouse, Mario’s daughter, Mia is also quite tall for her age. She was just 17 years old and had already reached a height of 5 feet 10 inches. While she is also athletic, Mia is rather into soccer and is a defensive midfielder for Reigh Academy and Holy Names Academy in Seattle, Washington.

As for Mario’s other son, Lio, he is currently studying at his father’s ex-high school, O’Dea, and is set to graduate in the year 2026. He also plays football for the Benson Bruins.

Banchero Used To Play For The University Of Washington Football; What Does He Do Now?

As mentioned, Mario was also a collegiate player for the Washington Huskies playing as a tight end for their football team.

While he was quite active as an athlete during his collegiate years, Mario after University, involved himself in business and now is a president at Mondo and Sons Inc. The company apparently is a meat processor and distributor in Tukwilla, Seattle, Washington.

He also is a managing partner at 1150 LLC. In the past, an American of Italian descent was also the president of the Genesee Merchants Association.

He further was the vice president and secretary at the City of Seattle District Council. Included in Mario’s resume is the role of board member at Rainier Chamber of Commerce.

Mario Banchero Is Often Found Posting Something On His Twitter

Turns out, Paolo’s father, Mario is well-lively with his social media handles including Facebook, Instagram, and Twitter. In the latter, the NBA star’s dad never misses a chance to talk about basketball, especially collegiate games.

He also often gives shoutouts to his ancestral country, Italy, especially their national sports teams, be it soccer, basketball, and others. On his other suchlike settings, Facebook and Instagram, people can find him supporting his kids by attending their every game as much as possible. In fact, the father of three seems to never get enough of mentioning his ever-so-growing kids.

Banchero, a native of Seattle Washington, went to O’Dea High School, class of 1992. As for college, he studied at the University of Washington graduating in 1997 with a Bachelor of Arts in Communications.

Mario is a Catholic, and he says, he is proud to be one. He also supports Pope Francis’ 2020 point, “a conscientious Catholic cannot be a ‘single-issue voter.’

Mario Banchero is six-foot-three to six-foot-four inches tall. In fact, according to his Twitter profile picture, he is even taller than the ex-US president, Barack Obama, who himself is six-foot-one inches tall. To say more, Mario is just an inch taller than his 6’2″ wife, Rhonda Smith Banchero.

What Is MyKala Skinner Net Worth In 2023? Her Salary & Financial Health

Who Is Kylian Mbappe Rumored Girlfriend Rose Bertram? All About Her Wiki, Instagram And Family