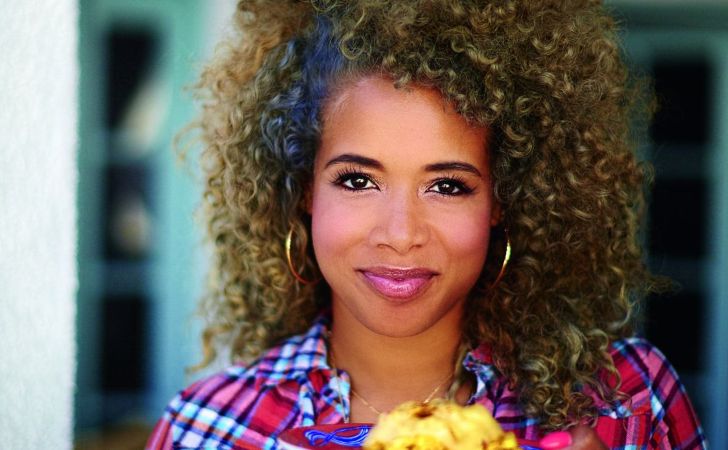 American singer, songwriter, and chef, Kelis, born Kelis Rogers, took her first step into music at an age of 14. With over two decades in the industry, she has achieved enough as a singer and a chef as well. But when it comes to Kelis’ husband and her marital relationships, things don’t seem as smooth.

The Masked Singer’s Kelis is married twice. While her marriage with her first spouse didn’t go as expected, she seemed pretty comfortable in her second marriage with Mike Mora. Unfortunately, her second hubby passed away in 2022. Besides, the 42 years old singer is also a mother of three kids.

Well, here is an insight into Rogers’ first relationship with American rapper Nas and her life at present.

The Kaleidoscope singer Kelis was presently leading a beautiful marital relationship with a photographer and real estate mogul Mike Mora. However, after his death, Kelis is single. The couple tied the knot in 2014 and are together ever since.

Though the couple did not reveal the exact date of their marriage, their wedding was reportedly a very private ceremony. They dated for a few months before they finally decided to walk down the aisle.

Before Mike’s death, the duo used to live together on their farm outside of Los Angeles. Previously, they resided in the LA mansion, which they put for sale for $1.885 million.

Kelis Rogers Is The Mother of Three Kids

The beautiful singer Kelis is also a mother. She has two children with her late-husband Mike and one from her previous marriage with rapper Nas.

She welcomed her first child with Mike in November 2015, just months after they tied the knot. Kelis announced her pregnancy with her first child, Sheperd Mora, in August 2015.

Similarly, the couple announced the birth of their second child on September 12, 2020, via an Instagram post. She chose a photo of the newborn daughter holding her hand to announce the news. In the caption, she wrote, “she’s just the sweetest little thing.”

Not only this, but she also has a 12 years old son Knight Jones from her past marriage with Nas. Knight was born in 2009, shortly after she filed for divorce from her first husband.

On the occasion of Father’s Day in 2018, Kelis even shared a beautiful photo of her first two children with her late husband Mike. However, she hid the faces of her kids with heart emojis. Check out the post here.

No doubt, the father and son seemed to have a great relationship.

While Kelis is a successful singer and a chef, her late husband was a photographer and a successful real estate agent. The handsome hunk had a strong love for photography and had been pursuing it professionally for a long time.

In fact, he even ran a lifestyle and photography website named mikemorafotos.com. There he provided personalized services surrounding lifestyle, photography, and a lot more.

Moreover, his Instagram is also more of a showcase of his photography skills. His posts are mostly beautiful photographs in various genres including fashion, fine arts, portraits, lifestyle, and food photography as well.

Besides, he was also a professional real estate agent which serves as a major source of his income.

How Did Mike Mora Die?

In March of 2022, devastating news rocked the life of singer, Kelis. Her husband of several years, Mike Mora passed away. He died after losing his battle with stage 4 stomach cancer.

A rep for the family said in a statement with PEOPLE,

“After a tough two-year battle with cancer, we are devastated to have to confirm the loss of our beloved brother Mike. An amazing Father, husband, and friend who gave so genuinely and cared so deeply for his family and friends,” the statement reads. “Through this difficult period, we ask that you respect the privacy of Kelis and her Family at this time.”

Initially, Mike was diagnosed with a health issue in 2020.

She Was Previously Married To American Rapper Nas

No doubt, Kelis Rogers leads a pretty beautiful relationship at present, but her past was not the same. The chef went through a few bad phases during her relationship with Nas.

Starting from the beginning, Kelis and Nas got married in January 2005. The couple met for the first time at an MTV Video Music Awards party in 2002. Well, like it was meant to be, they soon clicked and began dating. Almost after two years of dating, they took their relationship a step ahead by getting engaged in 2004.

However, despite a great beginning, they could not keep up with the wedding vows. Kelis filed for a divorce with Nas in April 2009, which was finalized in May 2010.

Why Did Kelis And Nas Divorced?

The couple’s divorce came out as a surprise for many. Though the singer didn’t initially reveal the exact reason for their divorce, she later in 2018 accused Nas of several misconducts.

In a conversation with the Guardian, Kelis revealed for the first time that Nas physically and mentally abused her. After getting pregnant with the first child, she opened up about her realization that she did not want her child to get into all the drama. Thus, she filed for a divorce seven months into pregnancy.

She referred to Rihanna and Chris Brown’s story of domestic abuse as a wake-up call for her. Referring to Brown and Rihanna’s tumultuous relationship, she said.

It just woke me up, I thought, you know, I can endure a lot, but I’m not prepared to bring someone else into this, So I’m done.

Further, Kelis’ also revealed Nas’ drinking habit as one of the reasons for the issues in their relationship.

Her Ex-Husband Nas Is a Successful Rapper

He is the son of jazz musician Olu Dara and is regarded as the greatest rapper of all time. Nas began his career as a rapper in 1991, as the featured artist on Main Source’s “Live at the Barbeque.”

He released his debut album Illmatic in 1994 and received both commercial and critical acclaim. His follow-up album I Was Written ranked on the Billboard 200 list for four consecutive weeks.

American singer-songwriter and rapper Kelis was born as Kelis Rogers on August 21, 1979, in Harlem, New York, the U.S. Her father Kenneth was an African-American jazz musician, whereas her mother Eveliss is a Chinese-Puerto Rican fashion designer.

She also has three sisters and she is the third born to her parents. Talking about her education, she did her schooling at Manhattan Country School, where she developed her interest in music by singing at church and learning to play the violin, saxophone, and violin.

Owing to her interest in music, she later attended the Fiorello H. LaGuardia High School of Music & Art and Performing Arts.

Besides, she is also a chef and has been part of some cooking reality shows such as Hell’s Kitchen, Pitch Battle, and many others. She is also an author of a cookbook named My Life on a Plate, released on September 28, 2015.