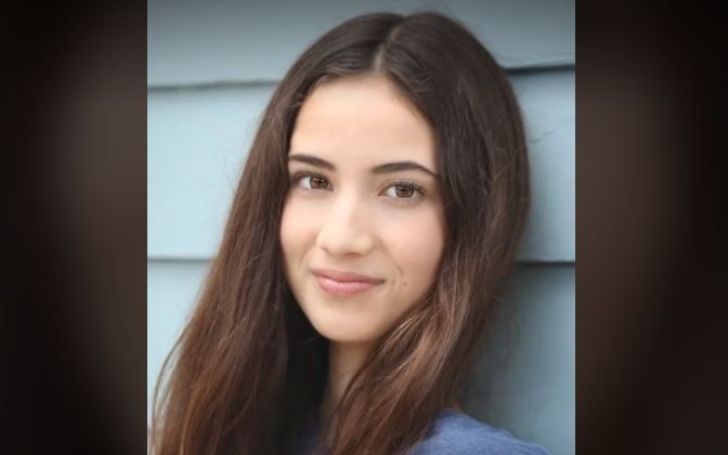 Lalania Hudson is a teenage model who is better known as the daughter of Bill Hudson, a musician, actor, and the former vocalist of the musical group, The Hudson Brothers.

Lalania is also the half-sister of the Almost Famous actress Kate Hudson who is in fact the daughter of Bill and his ex-wife and actress Goldie Hawn.

Bill’s daughter, Lalania is the youngest of his five children from his three partners. She is a Gen Z who is currently trying to make a name in her father and her half-sister’s line of profession. See how the youngster is doing in the headings below. Also, know if she has a good relationship with Kate, herself, and further.

Lalania Hudson Is An Equestrian, A Model, And An Actress

Lalania Hudson, Kate Hudson’s half-sister, was born in the year, 2006. The now 16-year-old Lalania is a model and an equestrian.

On her website, Lalania writes she loves riding horses, filming, and creating fashion designs. The post also mentions Bill and Williams’ daughter is quite active with Animal Rescue and plans to expand her efforts with her own Animal Rescue Organization.

Lalania studied acting with Young Actors Space in Los Angeles and currently is trying to pursue a career in Professional Modeling and Commercial / Theatrical Work.

Not much about Lalania’s mother is in the scope of general knowledge. Though some suggest she is Bill’s daughter from his bygone relationship with author Caroline Grahams.

Unlike the Hysterical actor’s other partners, Grahams wasn’t his wife nor did she receive any notable amount of attention from the media. She hence is the least talked-about individual from the professional or the personal facet of Hudson.

She Has Several Famous Siblings

As mentioned, through her father, Bill’s previous marriage to the Cactus Flower actress Goldie Hawn, Lalania is also a half-sister to actress Kate Hudson and her brother, Oliver Hudson.

Though Kate and Oliver didn’t grow up alongside Bill nor did they share much time with Lalania. The siblings instead predominantly became adults under the guardianship of Goldie and her longtime actor partner Kurt Russell.

Bill had married Cindy Williams in 1982 after finalizing the divorce from his other ex-wife, Hawn. Cindy and Williams remained husband and wife for 18 years before separating in 2000.

On one hand, Lalania’s half-siblings, Kate and Oliver are extraordinarily close with the Russell side of the family. Conversely, however, they have had a much more contentious relationship with their biological father and his kids from his other relationships.

In fact, in 2015, Oliver posted a photo of Bill on Instagram on Father’s Day with the caption “Happy abandonment day.”

To this, Bill told The Daily Mail in 2015 he was done with his kids from his previous marriage. “I say to them now, ‘I set you free,'” the Portland-born musician explained to the English tabloid at the time.

Lalania’s father said he had five children but from there on he considered himself a father of only three. He also declared how he no longer wanted to recognize Oliver and Kate as his own. He ultimately asked them to stop using the Hudson name.

“They are no longer a part of my life,” stated the ex-vocalist of the Hudson brothers.

Apparently, Kate also hadn’t bothered having any friendly relationship with her real father and his children from a young till her early 40s.

Amidst the long not-in-speaking-terms between Bill and his famous daughter, Kate Hudson, the former in Aug 2009 begged the latter to ‘come home’ and meet her then-baby sister, Lalania.

The Raising Helen actress’ biological father went public with the fact that she had a new sister, Lalania who he then said was two years younger than Kate’s own son RYDER.

Bill Hudson at the time had not talked to his famous daughter for years. He also revealed how the Fool’s Gold star had never met his then-three-year-old daughter Lalania – her half-sister.

The Big Shots 1987 actor also claimed his actress daughter with Goldie Hawn cut off all contact with him after he first told her she had a baby sister, shortly after Lalania was born in 2006.

He reportedly was desperate for his daughter with Hawn to get in touch. The Hudson Brothers star further posed for pictures with his youngest daughter and poured his heart out in the then-new issue of Life & Style magazine.

In the magazine, he wrote a note for Kate that said, “Katie, I love you with all my heart, and I beg you to come home and meet your baby sister. There’s only a two-year difference between Ryder and Lalania, and it saddens me that they haven’t once played together.”

Kate Finally Considered Of Having A Normal Relationship With Lalania Hudson

For years or even more, the Almost Famous actress Kate Hudson hardly had a concern to have a connection with her biological father. And she seemingly also bore the same feeling towards the children from his other relationship.

However, in Jan 2022, Kate spoke with her brother Oliver Hudson on their Sibling Revelry podcast about reconnecting with her musician-father Bill Hudson’s children.

The actress admitted she wants to reconnect with her actual dad’s children. She additionally told her brother Oliver about her wishes on the Jan. 8, 2022, episode of their podcast Sibling Revelry.

“We’ve been talking so much about sibling relationships and distraught relationships or good relations and we’re sitting here like we have the best family like we’re so great. And yet, we don’t ever acknowledge the fact that we have four other siblings,”

the Golden Globe winner star confessed to her older brother.

She added how she had been thinking about the other Hudsons for some time. Kate said she was finding it important that she and her brother reach out with all of their siblings and maybe connect with them a little bit.

While the Mother’s Day actress didn’t specify names, she is most presumed to have meant Lalania & her other half-siblings.

Does Lalania Have A Boyfriend?

On account of her Instagram, the youngest daughter of Bill Hudson doesn’t seem to have a boyfriend. Or alternatively, the teenager is quite discreet when it comes to her love affairs. Her socials are apparently all about her love for horse riding and nature though none of her posts includes even an iota of her dating matters.

Further, she is also yet to have a one on one talk with any sort of tabloids wherein she might have given more insight about her innermost matter. Having said it might be a while before people start seeing Lalania with a boyfriend or a partner.

How Rich Is Her Father And Her Actor Half-Sister?

It’s been some years since people have heard anything from the musician/actor father of Lalania Hudson. He nonetheless is reported to be quite a well-off man with a net worth supposedly between $5 to $10 million. Though the one that is significantly richer in Lalania’s family is her actress sister, Kate Hudson.

She has an estimated net worth of over $80million. That in turn sounds less in front of her mother, Goldie Hawn who has a fortune of over $90million. That figure again is inferior to Kate’s step-father, Kurt Russell’s $100 million net worth.