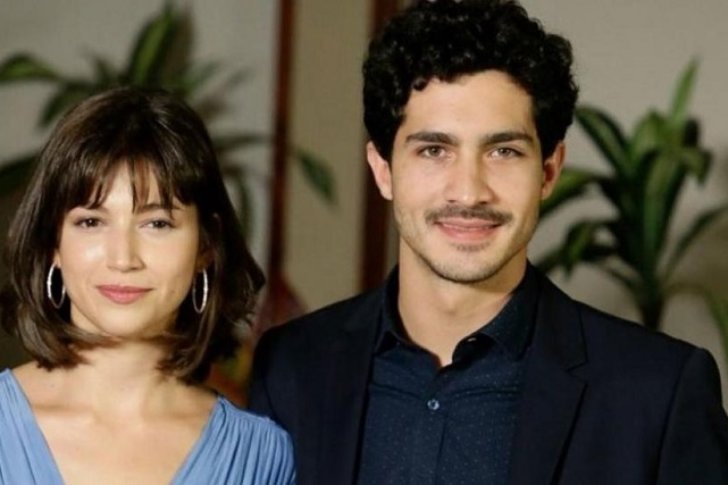 Argentine actor Chino Darin, 32, is in a committed relationship with his girlfriend Ursula Corbero, a Spanish actress. The two are dating since 2016 and are also quite open about their smoldering romance.

Looking at their enduring relationship, many of their fans wonder to know what is the key to their Chino and Ursula’s years-long relationship? Let’s know everything about their adorable love story in this article!

Chino got first met with his then-future-girlfriend Ursula Corbero on the set of the Spanish television series La embajada in 2016. Darin played Carlos Guillén while Corbero featured as Ester Salinas on the series.

They are sharing a loving relationship ever since. Moreover, the duo often flaunts their burning romance via their social media. On the same note, on 30th August 2016, Chino shared a picture with his girlfriend from their trip to Cerro Catedral, Argentina on his Instagram.

In September of that year, the two also appeared together in Le Figaro‘s supplement, Madame Figaro‘s advertisement.

Additionally, on 11th August 2019, Chino wished Ursula on the occasion of her birthday with a sweet message via his Instagram. He captioned the photo,

“Today is the atomic bomb that I love so much. ❤️ Happy birthday @ursulolita”

It looks like they are leading a happy personal and professional life hand in hand.

In an interview with Woman Madame Figaro, Chino Darin openly talked about his romance with his girlfriend Ursula. He also revealed how his years-long relationship with Ursula Corbero works.

we understand each other with  a look. This  is what happens when you start to get to know each other more and get along. We are buddies, we enjoy doing things together. Even with these photos

It has been an  incredible discovery! He  has an amazing energy and he is very funny, noble, well … he is always in a good mood and amuses you with his jokes and comments. As a professional, I admire him

It is truly amazing to lead such an envy-inducing relationship for the couple despite having such a busy schedule. They still seem much stronger than ever.

What Surprises Chino Darin Most About Ursula?

In the same interview with ‘Woman Madame Figaro‘, when asked what surprised them most about each other when they started dating,

To me, the  energy  that Úrsula has, especially to face bad moments or things that she does not like. Actually, we have not had  moments dapper,  but she has an internal fire, a spark that can do anything. It  lifts everyone’s spirits  . It is one of her most dazzling aspects. She is a  wonderful woman,

Corbero is a woman with full of positive energy and has an innate ability to handle bad situations.

Has Chino Decided to Make Ursula His Wife?

Well, at the moment, it looks like the lovebirds want to keep their romance as it is. They are in no rush to tie the knot yet. Similarly, Chino hasn’t talked anything about marrying his girlfriend to date.

Both of them had been in a few relationships in the past so this time around, they would want to stay in a relationship for some time before eventually settling down.

Chino and Ursula are Dog Lover

Chino and his girlfriend Ursula are both avid animal lovers. He has two puppies Marón and Kenya while Ursula also owns a dog named Lolita.

They frequently share beautiful snaps on their social media with their pooches.

The actor Chino Darin was also involved in multiple relationships with celebs in the past. In 2013, Darin was romantically linked to his now ex-girlfriend Calu Rivero, an Argentine actress.

Sources reported the two first met at their mutual friends’ meeting in late 2012. After some time, the two started dating and looked pretty much into each other.

Talking about his relationship with Calu, the actor said in an interview with VOS,

We are not afraid of anything. There are couples who are quite tight but this is not our case. I do not think that strengthening ourselves as boyfriends has to do with being stuck all day.

But their relationship didn’t sustain for long and heir romance slowly faded away by late 2013.

Darin was also romantically linked to Maypi Delgado and Magui Bravi in the past.

Chino Darin is From a Family of Actors: Details on His Parents and Girlfriend