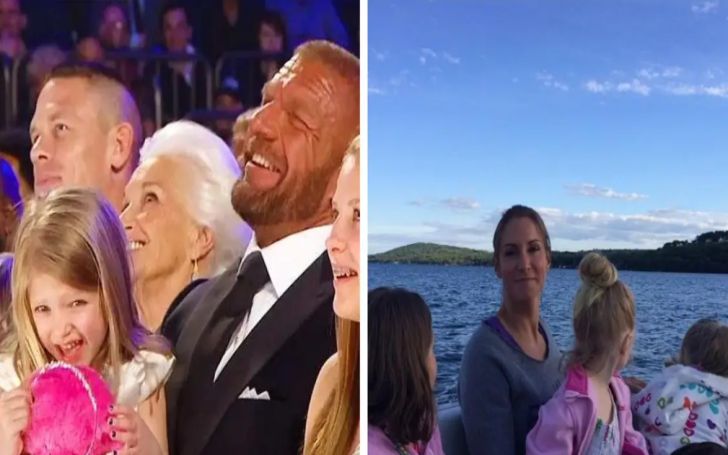 Vaughn Evelyn Levesque is a celebrity kid born to the WWE superstars and power couple Triple H and Stephanie McMahon. Her mom and dad have been married since 2003. She is the youngest of three siblings.

Being born to a family surrounded by wrestlers all around, people are already making speculations about her following in the same footsteps. So, is the youngest daughter of the WWE superstar Triple H going to become a wrestler as well?

Stay tuned to know all the questions related to Vaughn Evelyn Levesque!

Who Vaughn Evelyn Levesque Her Parents? Her Short Bio

She was born on 24th August 2010 to her father Paul Levesque aka Triple H and Stephanie McMahon. Talking about her age, she is 11 years old and will celebrate her 12th birthday this August. Her zodiac sign is Virgo.

As for her ethnicity, Levesque has a mixed ethnical background, where her mom has Irish ancestry while her dad has French-Canadian ancestry. Similarly, she is American as per her nationality.

As we said earlier, the star kid was brought up in a wrestling family. Apart from her parents, her maternal grandfather and great-great grandfather both were boxing promoters. Furthermore, her maternal uncle is a pro wrestler.

When did Vaughn’s Parents Marry? Are They Still Together?

Her father Triple H and mother Stephanie McMahon started dating from the time they were in WWE. The real-life couple were acting to have a connection on screen in the beginning and even exchanged vows in Las Vegas in late 1999.

Even though their relationship was fake on screen, the two were falling in love with each other for real. After dating for a couple of years, the powerful couple decided to take their relationship even further. So, on 5th October 2003, they officially tied their knots. The lovebirds have been together ever since and share three daughters together.

In fact, the two separated twice before walking down the aisle. The first time they split was when Stephanie found out about her husband and Chyna’s affair behind her back. She was angry initially but later took her step back. In an interview on The Howard Stern Show, she said:

Supposedly, they weren’t dating at that point. They had a house together and they’re trying to get out of the house or whatever. We saw each other for a couple of months and then when it came apparent to me that obviously she is living in your house and something’s going on, we stopped talking for a long time

The second time was when Vaughn’s grandfather Vince McMahon forced them to separate. Despite they broke twice initially, they continued their relationship again and are still together with no separation rumors.

Vaughn is The Youngest Out of Her Three Siblings

The celebrity child is not alone. She is blessed to have two elder sisters. Her eldest sister is Aurora Rose Levesque born on July 24th, 2006. Whereas, the second eldest sister Murphy Claire Levesque was born on 28th July 2008.

According to their megastar parents, all of their daughters share a great bond and enjoy each other’s company very much. However, their mother once said in an interview that her daughters can be easy targets of bullies because their parents are well-known celebrities. She also grew up in the same type of environment and thinks that her daughters are more vulnerable to it.

Her eldest sister Aurora Rose Levesque is the first to follow in the footsteps of her parents. She is training hard to become a pro wrestler and carry out the family tradition.

In an interview with ESPN, their mother Stephanie said that her eldest daughter is pretty much committed to winning the women’s championship and becoming the future Women’s Champion.

She said in the interview there are a lot of opportunities for women these days. Similarly, talking about her daughters, she said “they can become anything until and unless they put their mind to and work hard for it.”

Vaughn Evelyn Also Shares the Same Interest as Her Sister

The youngest daughter of Triple H and Stephaine also seems to be interested in wrestling. Her mother told Vaughn along with her eldest sister Aurora also practiced matches at their home in September of 2016. Stephaine said Evelyn even made her announce her entrance to Katy Perry’s song, Rise.

This shows that the star kid is also aspiring to become a wrestler. However, there is still time and whatever career path she chooses, we wish her the best of luck.

The youngest daughter along with her two sisters are currently living a happy and blissful life with their parents in their $30 million mansion in Weston, Connecticut.

Talking about her parents, both are multi-millionaires. Her father Triple H is estimated to have a net worth of $150 million which he has accumulated from his career as a professional wrestler and Executive Vice President and Talent Relations for WWE.

Similarly, her mother Stephaine has a net worth of $150 million which she has gathered from her career as a former wrestler and chairwoman and Co-Chief Executive Officer of WWE.

Vaughn Evelyn Levesque is a celebrity kid born to the WWE superstars Triple H and his wife Stephanie McMahon. She is the youngest of three siblings. Is she also into wrestling? What is her age?