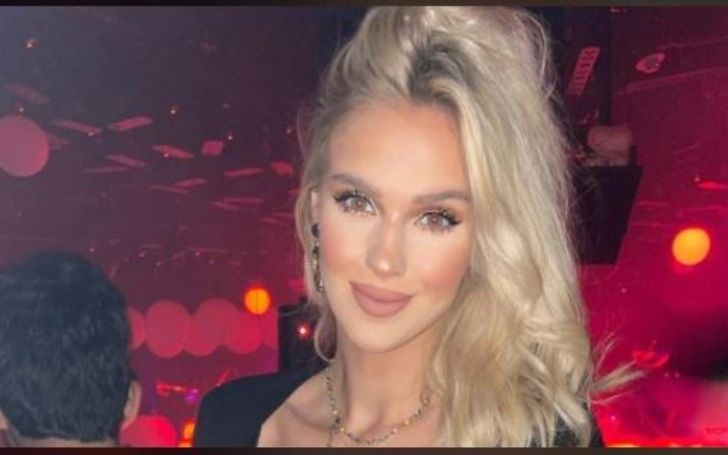 Veronika Rajek is a Slovakian model who recently has been gaining quite the attention with people both going judgemental as well as complimentary of her body and looks. However, there’s also one other thing for which she had entangled herself in the media dramatics, her alleged relationship with NFL player, Tom Brady.

Rajek, besides the two aforesaid things, also deserves a piece of writing for other aspects, in this case, her dating life or the boyfriends she has had so far. Although the model is a married woman, many often confuse her for an all-single lady.

And to be fair, looking at her recent social media posts, the tall Slavic model does look without a partner for the time being. Having said that, it begs the question if she is has a new boyfriend or still going strong with her husband. Meanwhile, have a closer look at her overall dating profile including the real truth about her relationship with the American superstar Tom Brady.

Rajek while definitively Instagram famous, doesn’t have much of her history written in any books or journals. In fact, one could say, the media is just starting to dig around her life and write as many details as they can from a few or two details available on her social media feeds. That said, it’s a big mystery who or how many guys Veronika dated prior to getting public attention. Something that is as mysterious is her first romantic partner or her first known boyfriend. Anyway, here we have brought to you the list of Veronika Rajek’s boyfriends, the ones we know obviously.

The best answer one could find regarding this subject, nevertheless, is Viktor Rajek, Veronika’s boyfriend-turned-husband. But then again, it is unclear when Viktor and Veronika started dating however the couple first shared a picture of them together in Dec 2016 via Veronika’s Facebook.

Veronika Rajek married fellow countryman and bobsleigh competitor Viktor on June 13, 2019. Rajek’s husband competed in the 2006 Winter Olympics two-man and four-man events. He now is the owner of his own restaurant Bier and Bierli in Vienna Austria.

The husband of Rajek is also a business graduate of the Ohio-based college University of Akron.

Are Rajek And Viktor Still Married?

Recently there has been lingering speculation that Rajek might have already separated from her husband, Viktor. This has especially arisen with respect to the fact that the tall model lately hasn’t shared any updates on her marital life with Viktor, especially on her otherwise overtly active Instagram and Facebook. However, the truth has largely remained a mystery.

Back in Jan 2017, Rajek posted a somewhat discussion-worthy picture on her Facebook. The East European beauty had shared a picture of herself with some guy alongside a caption and hashtags,

Rajek, however, didn’t share any more details than this or the name of the man whom she was addressing with #boyfriend. It nonetheless puts one at sea as to who the person really is or was to Veronika though looking at the texts of the picture, one is likely to guess, he might be just one of the boyfriends of the Slovakian native.

Is NFL Star Tom Brady The New Boyfriend Of Veronika?

Tom Brady, the NFL Goat recently created headlines for his high-profile divorce from Brazilian American model Gisele Bundchen. And more recently Tom got linked to Veronika after the model attended the NFL star game against New Orleans Saints on Dec 7, 2022.

Rajek later took it to her Instagram to show that she did indeed attend Brady’s game all while wearing his shirt in the stand. However, the thing that started the rumor of her and the athlete is the Ig caption of blonde model that said,

I saw the LEGEND and if somebody asks me again if I love Brady, yes I love him and show me somebody who doesn’t.

Even his haters love him because they know he is the [goat emoji]. Thank you for a fantastic show.

Soon after this, Veronika did receive floods of comments all asking if she was really looking to be the new wife of the NFL superstar.

Is Veronika Rajek Really Dating Brady; What About Her Husband, Viktor?

It, however, seems very unlikely that Brady is dating Veronika as there aren’t any reports of the latter being all single or any news regarding her separation from her reported husband, Viktor. Tom dating Rajek looks likely in light of the fact that Rajek, lately, as mentioned, hasn’t given any details on her relationship with Viktor.

She however also hasn’t deleted the wedding pictures of her and her spouse or their old pictures. Furthermore, Brady also doesn’t seem active toward pursuing a new partner. It additionally is unclear if Rajek and Veronika have actually met in person ever. Meanwhile, Brady’s ex-wife Gisele Bundchen was spotted with Florida-based jiu-jitsu instructor Joaquim Valente merely within a week of her divorce from Tom.

Bundchen and Tom married in 2009 and remained husband and wife until their divorce in late 2022. When together the now-former couple welcomed two kids, a son, Benjamin, and a daughter Vivian.

Rajek, originally, Veronika Matasova was born on Feb 20, 1996, in Bratislava Slovakia. She began modeling at the age of 14 and according to her Facebook, she completed her education at VŠBM Košice and Športové gymnázium Košice. Following that, Veronika studied at the Inštitút vzdelávania, poradenstva a informatizácie for her higher studies. She has degrees in MBA and MSc.

Rajek has also competed in competitions including Miss Slovakia 2016 and Miss Summer 2015. As a model, Veronika has worked for several high-profile brands including Blumarine, Vera Wang, Hide and Jack, Dolce and Gabbana, Philip Plain, Moschino, and others. In the meantime, she also promotes several bikini and swimwear brands.  What’s more Veronika apparently also has an account on Only Fans with a basic fee starting from $16.25 per month.

Who Is Julius Dein? Untold Details On His Current Girlfriend, And His Past Affairs

Is Charles Pol Married? Interesting Facts On His Wife, Children