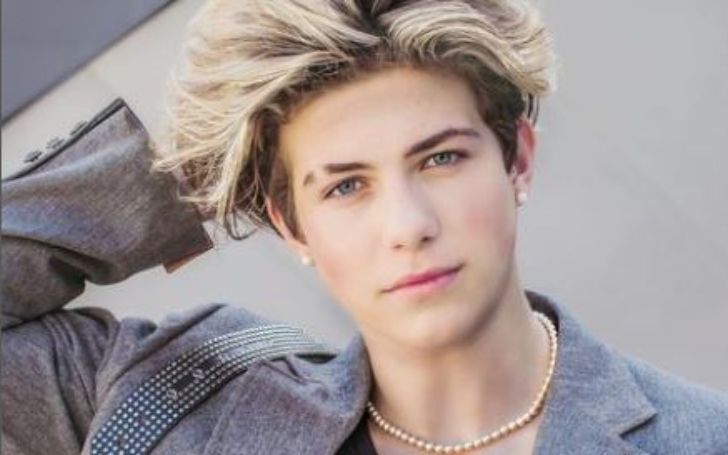 Bryant Walker is a YouTuber, TikTok, and a social media star who is best known for his very popular titular YouTube channel with close to 900k subscribers where he and his friends post funny videos. Bryant creates fun and exciting situational and challenge videos that premier every week with a group of fun content creators. He had also partnered with Piper Rockelle, another popular Youtuber and social media star to embark on filming YouTube videos.

Walker who uploads a new video every week on Saturdays at 9:30 am is also almost always the hot boy in the music videos. He additionally is known for his acting role as Young Jack in popular ABC’s hit series Station 19 and in some films like Link: Legend Of Zelda, The Body Of Levi, Her Secret Family Killer, and others.

Walker who has over one million followers on Instagram has also been part of some well-known content creator houses. Know peripherally about him in the columns below; how he got famous, his original home, acting, girlfriends, and so forth.

Walker Bryant Is From Ohio

When reported in Jan 2022, Bryant, a Libra, was a freshman in high school at Local High School in Columbus, Ohio. He is also on a soccer team.

How did Walker Bryant Get Into Acting?

It was because of his sister that Bryant showed interest in pursuing acting. She had mentioned her own interest in acting and modeling first and then Walker wanted to do it too.

At the time, he and his family lived in Ohio so they hired an agent and started booking jobs right away and later eventually realized that they both loved acting.

Walker moved to Los Angeles in 2016 to pursue his dreams of becoming part of the entertainment industry. For Walker, moving from Ohio to California was a huge step.

Since he’s been in L.A, Bryant has booked an episode of Station 19 on ABC, Matty Pazz is a Noob on Awesomeness TV, Insult Comedy Dog on Funny or Die, and many feature films, and several short films. Some of Bryant’s acting credits include the short films, ‘Lauren Park’, ‘The Plastic Man’, ‘8 1/2’, ‘Innocence’, ‘Body Of Levi’, and ‘Jack’.

Bryant says acting has changed his life a lot. The best part about acting for Bryant he says is filming.

Bryant Has Also Been In Ads

For the Universal Studios commercial, Walker had to ride the Jurassic Park ride 13 times in a row. One other project he has been a part of includes a Lego Batman commercial for the filming of which he flew to Denmark.

Walter also has been in a handful of content creator houses. His first ever crew was the Pipers Crew. Walker, however, left it after some time.

The prankster said he left the Pipers because the group members and he weren’t vibing so much and that the stars’ moms were also not getting along.

After leaving the Pipers, Bryant joined the Vibe Crew in 2020, another content creation house including 17 other members. Walker though would also leave Vibe Crew the same year in Oct to be with another creator house, Goat Fam.

On leaving Vibe Crew, the native of Columbus, Ohio said it was nothing wrong with the squad. Walker while talking with the Paparazzi Gamer in Oct 2020 said there were many reasons why he left the Vibe, he didn’t exactly specify what they were.

Walker had a relationship with Indi, an up-and-coming singer and a fellow social media star and actor who is best known for running her entertaining self-titled YouTube channel. Star is also known for collaborating with other YouTube stars such as Piper Rockelle and Sophie Fergi.

Indi additionally has acting credits in Henry Danger, Dead to Me, The Hyperions, and Miscreants.

Prior to dating, Walker and Indi had been playing videos games and whilst doing so developed feelings for each other. Indi was Walker’s secret admirer before she started dating him.

She used to drop mysterious packages and traces to meet him. Indi later confirmed that she was Walker’s mysterious crush in an Instagram photo. She also admitted to developing feelings for Walker after spending a lot of time with him playing video games.

She and Bryant, however, broke up after five months of a relationship.

Indi later took to her Instagram to confirm her breakup and made it clear that it was not a prank.

Windi is Over – it is not a prank – i will not be making a video about it – please respect my privacy right now – thanku!,

The ex-couple never shared the real reason behind their split.

Three weeks prior to their breakup, Walker had pranked Indi that he wants to break up with her because he was moving from California to South Carolina reasoning that he wants to live near his parents in Ohio.

Bryant And His Another Ex-Girlfriend, Capri Everitt

Walker and Everitt, a singer and musician became official in July 2021. Bryant and Capri were really good friends before they started dating.

Walker had also asked Everitt to go to prom with him and the six-foot-inches tall Youtuber even filmed and posted the whole thing on camera. In fact, Walker asked Capri to become his girlfriend on camera a couple of videos later.

However, by July 2021 the duo had already broken up.

That month Walker released a video with Everitt explaining the reasons why they weren’t going to be together anymore. They took their break up to the internet posting a video wherein the ex-couple appeared together to talk about their split.

We just want you to know all the facts straight from us,

Things can get messy when people break up but like we don’t want that for each other (Walker and herself).

Bryant assured his fans that they were still friends with each other and weren’t going to be dramatic by blocking each other.

The duo jointly agreed that the separation was mutual and they were better off just friends. One of the reasons that the relationship ended, Bryant said, was because he and Capri had moved too fast with their relationship.

Bryant and Capri stated they came to the internet right after the breakup because they didn’t want people to spread rumors and hate. The former relationship partner though is still friends with each other. Capri since has moved on from the separation and now has a new boyfriend.

Who Is Walker Bryant Dating Now?

As for now, Walker seems to be with another social media star and dancer, Bella Moore.

While Bryant hasn’t said much about Moore; when and how he started seeing her, the blonde teenager first appeared on the blonde-haired Tiktoker’s Instagram in mid-Dec 2021.

The two have since cameoed on each other socials quite a few times. The pair, however, haven’t made their relationship official yet.

The Tiktoker/Youtuber, Walker Bryant is seemingly and certainly rich at least for his age. Not even 16, and Bryant apparently has a Lamborghini of his own.
In addition to his TikTok and YouTube income he also has his merch adding to his ever so growing wealth.
His richness is also quite evident from his social media lifestyle and considering the posts and some outlets’ talks it shouldn’t be surprising that he has an estimated net worth of close to or even $1million.

Some of his other favorites are

Movie: The Fast and the Furious: Tokyo Drift

TV Show: On My Block