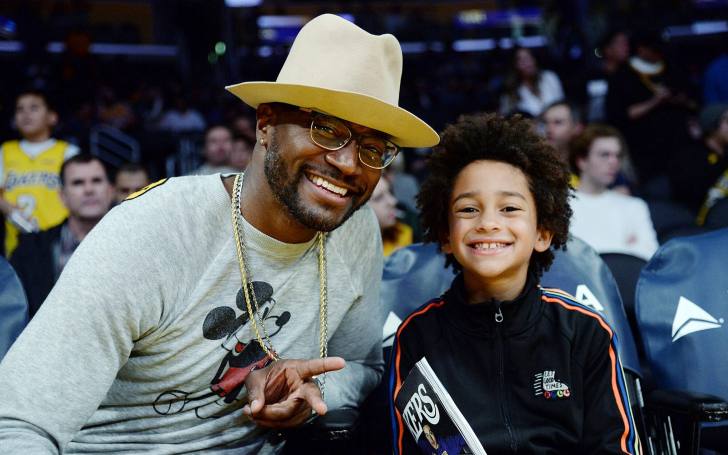 Walker Nathaniel Diggs is the only son between Taye Diggs and his ex-wife, Idina Menzel. When you are born to famous parents, people are bound to be curious about your life.

Taye and Idina were in a relationship for a long time before separating for good. The only thing that holds the former flames together is their son, Walker. Both of them share the joint custody of their child and till now they are excelling in parenting.

Besides, we’re sure many of you are intrigued to know if Walker is a possible star in the making just like his folks. Well, going by his current lifestyle, he might not go down the acting road. Let’s find out where Walker Digg’s interest lies along with some other interesting facts.

Born on September 2nd, 2009, Walker is a biracial star kid. While his father Taye comes from African-American ethnicity, his mom is a Russian Jewish. Walker’s maternal great-grandfather moved to the US from Russia. As of early 2022, Walker is 12 years old.

Back when Walker wasn’t even born, his mother said she will definitely tell her kids about the Jewish heritage and history. She told, “I feel strong connections to my culture and, so yes, I would like to bring them up with knowledge of the stories and awareness of the history. I’m just not sure about the rest. I’m a spiritual person, not a religious person.”

Judging by her statement, we’re sure Walker, so far, has been given history lessons regarding his Jewish heritage.

What Is Walker Nathaniel Diggs’ Age?

The handsome hunk Walker is 12 years old at present. However, he will turn 13 in September 2022.

This is quite hard to believe and sad as well. When the couple first started dating and made things official, their romance was received with a mixed response. Walker’s father and mother, who come from two different races, faced severe prejudice, purely because of their racial heritage.

Back in 2004, Taye received racist death threats from all across the country. The racist rant increased exponentially after their interracial marriage. As sad as it is to say this but to this day, interracial marriages are generally frowned upon by communities. In a time where your race shouldn’t define who you should love or not, hearing about such incidents is just awful.

Despite all the odds, the pair perceived through all the hate. Though they later called it quits due to different reasons, they never allowed this problem to cloud their son’s childhood.

When a person becomes famous due to their famous parents, people automatically believe you will also follow in their footsteps. Similarly, Walker’s mom and dad both are big names on Broadway. They made a big name for themselves after appearing in the 1996 Broadway play, Rent.

However, it looks like their son Walker isn’t the least bit interested in acting, for now. In July 2020, during an interview with US Weekly, Taye vividly talked about his son’s interests. He said,

“He doesn’t feel the need to follow in our footsteps. He’s doing all this stuff that I didn’t get a chance to.”

Isn’t Taye the sweetest? He is happy his son is doing whatever he feels like doing and not what he is expected to do. In addition to that, Diggs also mentioned Walker is into sports. He stated,

“He’s a really great athlete. He plays basketball every day and when he’s not playing basketball, he’s running around throwing a football.”

Moreover, the Sexiest Man Alive titleholder also mentioned it’s refreshing’ to watch what Walker does in the field and then Walker watching his parents do their own thing on the screen.

A divorce is one of the most painful things to experience for any couple. It becomes ten times more excruciating when you also share a young child. Not only does it impact you mentally but it also affects the latter part of your child’s life.

Likewise, when Idina and Taye came to the painful decision of separating, the only thing they had in mind was their son. For the sake of their son, the pair remained cordial with each other over the years.

In an interview with US Weekley, while talking about his dynamic with Idina, Taye said,

“We never make a wrong step because we’re always thinking of Walker first. We both love Walker and want what’s best for him. I think once you do that, it allows for things to be a little bit easier.”

Meanwhile, Idina also has some great things to say about co-parenting with Taye. She said in an interview with PEOPLE, that you have to set aside your personal problems and ego.

“He comes first and you have to get past your own egos and you never talk bad about each other.”

We’re certain Walker has nothing to worry about. Despite the separation between his mom and dad, he is still able to cherish parental love.

Being a single parent, you are bound to have some restrictions in your life. Likewise, Taye and Idina both have to tread carefully before jumping into a new relationship. And why wouldn’t they? After all, they can’t overlook their child’s secured future for the sake of their happiness.

When Taye first started getting back to the dating scene, he became worried if it will somehow impact his son. The actor once mentioned how he accepted his son’s wish to not date anyone. He didn’t want anyone to intrude in their father-son special bond.

But after some time Taye thought it is time to start going out and meet new people so he has to have a little chat with his son. Subsequently, some times later he brought home his new girlfriend, whose identity remains behind closed doors. The actor was quite stressed out over the fact that how his son would react.

Fortunately, all went well and Walker approved of his father’s new girlfriend. Taye said,  “I introduced her to him, and they get along really well.”

His Mother Idina Got Married for The Second Time

Several years after Idina and Taye’s divorce, the Mezzo-Soprano singer married once again. She exchanged vows with actor Aaron Lohr, on September 22nd, 2017. Since then the couple is enjoying their marital bliss.

We’re sure Menzel, just like Taye, also had her son in mind when she decided to start dating once again. This implies Walker also approved of her mom’s new husband.

Previously, Idina & Taye exchanged vows on January 11, 2003, in an intimate ceremony. They first met on the set of the Broadway play, Rent. The couple remained married for around 10-years before divorcing in December 2014.  They don’t share any other kids except Nathaniel.

Walker Nathaniel Diggs Net Worth: How Much is His Parents Net Worth?

Walker’s father Taye has a net worth of $14 million while his mom is worth $16 million. Given that both of his parents are multi-millionaires, we’re sure he doesn’t have anything to worry about, at least financially.

Being a star kid, Walker lives a fairly lavish lifestyle, however, he has not revealed his net worth so far.