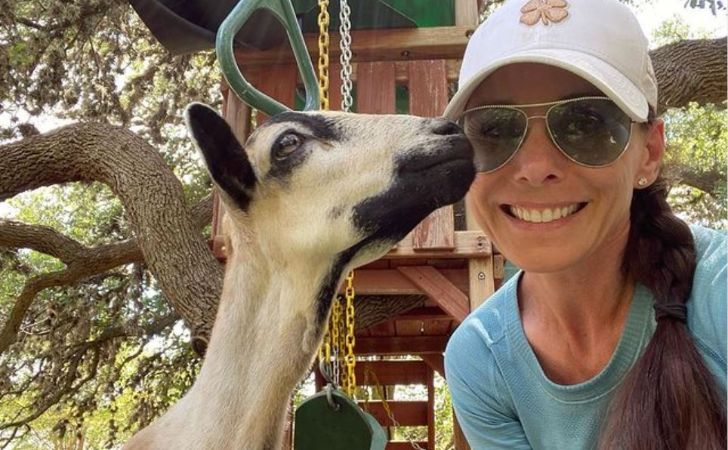 Wanda Ferraton is a Canadian actress and stunt performer. She is widely known for her work in movies like Santa’s Slay, Johnson County War, Half Past Dead 2, and numerous others. Besides, she is also famous as the wife of American professional wrestler Bill Goldberg.

Despite being a wife of a famous celebrity, Ferraton has earned and maintained an identity as a stunt performer. Along with professional success, she also leads a great relationship with her husband. But does she have any children?

In this article, we are going to talk in detail about every aspect of her professional and personal life.

Wanda Ferraton is a stunt woman and actress famous as the wife of American wrestler Bill Goldberg. She was born in the early 1970s to her father Allan Ferraton and mother Gwen Ferraton. She is not the only child of her parents but is rather the youngest amongst their five children.

Born in Saskatchewan, Canada, Wanda did her schooling at a local school in her hometown. Unfortunately, she has not revealed much about her academics.

Wanda Ferraton Is An Actress, TV Host, And Stunt Performer

The beautiful Wanda has her hands in several professional fields and has successfully handled all her professions. She is not just a stunt performer but an actress and TV host as well.

Talking about her acting credit, she appeared in the 2007 film Half Past Dead 2. In the movie, she played a character named Wanda Goldberg, who is the Warden’s assistant.

As a TV host, she has hosted a TV special WrestleMania 33. Likewise, she also appeared in the TV documentary series Jay Leno’s Garage. She appeared in an episode of the series named Love Stories.

Wanda’s major work so far has been as a stunt performer. She has been a body double for several actresses in numerous movies. She made her debut as a stunt woman back in 2000 in Skipped Parts.

The following year, she appeared in four movies as a stunt woman that include Texas Rangers, Viva Las Nowhere, Speaking of Sex, & The Unsaid.

Her other works as a stunt woman include Ararat, Johnson County War, Ginger Snaps Back: The Beginning, Caught in the Headlights, Santa’s Slay among others.

She Married Bill Goldberg In 2005

Like we said earlier, Wanda Ferraton is a married woman. She is married to American professional wrestler Bill Goldberg. The couple tied the knot on April 10, 2005. They kept their marriage very low-key with only a few friends and family members attending the wedding.

Well, it has been over 15 years since the couple walked down the aisle and their relationship seems as strong as ever. There have been no reports of conflicts between the two. Rather the two are often seen together spending quality time together.

We hope their relationship continues for years to come.

She Is a Mother Of a Son

From her marital relationship with Bill, Wanda also has a son named Gage Goldberg. He was born in 2006 and is around 14 years of age at present. She shares a great relationship.

Interestingly, Bill, despite being a successful wrestler, has stated that he does not want to see his son become a wrestler.

While the couple is married and doing pretty well as a couple, their love story began on the sets of Santa’s Slay. They met during the shooting of the 2005 film Santa’s Slay, where Bill played the lead actor whereas Wanda was a stunt double.

As the couple came across, Goldberg was dressed as a killer Santa Claus. Talking about the first meeting with Wanda, Goldberg once stated that he saw her for the first time when he was dangling on a swing in a strip club as a part of a shooting of a scene. He said,

When Wanda met Bill for the first time on the set of Santa’s Slay, both of them were already in a relationship. In an interview on Jay Leno’s Garage, Wanda stated how she had an Instant connection with Bill and thus broke up with her then-boyfriend. She said,

“I had an awesome guy, And I broke up with him that night and said, ‘Nope. If I can feel this way about someone else that quickly, I’m not in the right relationship.’ It was that quick.”

Video: Wanda Makes Public Appearance With Her Husband And Their Son

Not only Wanda, but the case was the same for Goldberg as well. He stated that the moment he saw her, he wanted to ask her out on a date. He stated,

“If I did not ask her to go to dinner with me, I would have regretted it for the rest of my life, “So you don’t know until you try, and I went out on a limb.”

Well, their first date soon turned into a romantic relationship, and just around 3 and half months after their meeting, they married.

As a stunt woman, she has an immense love for cars. Well, she expressed her love for cars during an episode of Jay Leno’s Garage, where she appeared along with her husband back in 2016. In a show where she is seen driving a black 1970 Pontiac Trans Am, Goldberg said,

Every stunt woman has to have a 650 horsepower Trans Am

Well, Wanda and Bill have a collection of cars as well and she loves her 1967 Mercury truck the most. She stated that she has been driving the truck since she was 9 years of age.

“It was our farm truck. And all of us kids learned how to drive in that truck.”

As a stunt woman and actress, Wanda undoubtedly has a huge salary. If reports are to be believed, an average stunt woman receives $250,000 per annum. Going by the date, her net worth is obvious to be in the millions. But unfortunately, the exact sum is not known.

On the other hand, her husband has a total of $16 million in net worth, as per Celebrity Net Worth. He makes most of his money from his career as a wrestler.