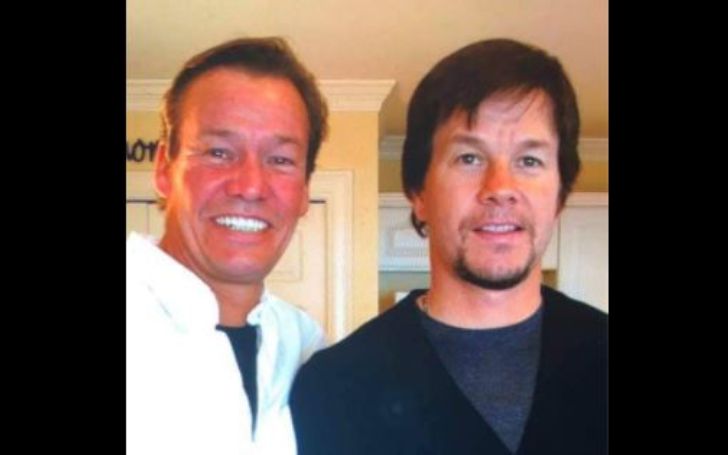 Arthur Wahlberg is an actor, former reality star, and house remodeler who is better known as the elder brother of the Departed and the Uncharted actor Mark Wahlberg.

While he is elder, Mark and his other brother, Donnie Wahlberg are the most famous faces from the Wahlberg’s large family. While this Boston Irish family holds a tight bond, they have certainly gone through some trials and tribulations.

Take a look at Wahlberg’s rocky past with a more focus on Arthur. See if he has a dream family similar to his prominent brother, Mark. Know what is he doing in the present, whether he has a girlfriend, wife, or children.

Arthur Wahlberg Is Of Swedish And Irish Descent

The now 58 years old Arthur Wahlberg was born on June 17, 1963. Wahlberg is of Swedish descent through his father. He likewise is Irish through his paternal grandmother.

Arthur’s mother was of Irish, English, and French-Canadian ancestry. On his mother’s side of the family, Arthur Wahlberg is distantly related to author Nathaniel Hawthorne. He and his siblings grew up Catholic and they almost all attended Copley Square High School on Newbury Street in Boston.

Arthur Wahlberg Parents Were Boston Natives; His Father Was A Delivery Man

Both Arthur’s parents were natives of Boston, Massachusetts. Arthur is one of nine children of mother Alma Wahlberg and Donald Wahlberg.

His father, Alma Wahlberg’s ex-husband, Donald Wahlberg, died in 2008 while his mother, Alma died at 78 in April 2021. Alma worked as a bank clerk and nurse’s aide “to make ends meet” while raising her children, according to her official “Wahlburgers” bio.

The mother Wahlberg would also go on to serve as a greeter and hostess at the family restaurant. She also appeared on the Wahlberg family reality show “Wahlburgers.”

During the run of the Wahlburgers, Arthur’s mother Alma Wahlberg had become a celebrity in her own right through their reality show.

It ran from 2014 to 2019 and chronicled the family’s work at their Boston-based burger joint of the same name. Arthur’s father and patriarch of the family, Donald, worked as a delivery driver.

Donald was also a military veteran who served during the Korean War. Arthur’s parents, Alma and Donald divorced eleven years after the birth of their last child.

Arthur And His Siblings Grew Up In Poverty

Mark has admitted often times the Wahlberg siblings along with their mother lived well below the poverty line. Once his parents’ divorce was official, Donald deserted the family leaving Alma to raise all nine children on her own in a small three-bedroom apartment.

Because money was so tight, Arthur’s mother had to rely on welfare for food such as butter and cheese to make sure the family was fed. In an interview, Mrs. Wahlberg said, “I invented the craziest meals. I had no choice. I had to find them something to eat.”

Arthur Wahlberg Had Eight Siblings; One Died Of A Heart Attack

Arthur is the first son of Alma and her late ex-husband, Donald. One of his siblings, Debbie passed away on September 2, 2003, at age 43.

It was also the day when Mark welcomed his firstborn daughter Ella Rae. Debbie apparently was in poor health at the time.

She reportedly had gone to the hospital to be treated for what doctors suspected was a kidney stone. At the hospital, Debbie, however, suffered a fatal heart attack during the routine procedure.

He is a singer, songwriter, rapper, actor, record producer, and film producer. Donnie is also the founding member of the boy band New Kids on the Block. Outside music, Arthur’s brother, Donnie has had roles in the Saw films, Zookeeper, Dreamcatcher, The Sixth Sense, Righteous Kill, and Ransom, as well as appearing in the World War II miniseries Band of Brothers as Carwood Lipton.

Arthur’s other brother, Paul Wahlberg, too is some sort of a celebrity. He, though, is not in the line of show biz. Paul instead is the chef. He runs the Wahlburgers restaurant in Hingham, Mass, and also in some other states across the country.

Arthur and his brothers once were also part of a reality show trend. While on the run Wahlburgers often topped charts as one of A&E’s most popular shows. Arthur also has three half-brothers and half-sisters on his father’s side: Scott, Buddy, and Donna.

Arthur Wahlberg Dark Past; Probably Had Addiction And Other Illegal Issues

Almost all of the Wahlberg brothers have a checkered history, especially their teenage years. Tabloids have never been able to get enough of Mark’s numerous run-ins with the laws when he was a boy.

Turns out Arthur might have been no exception either. There have been stories that the Wahlberg brothers began running with the wrong crowd at a very early age, eventually leading them down the path of drug use and jail time.

Because their mother worked all the time, there wasn’t a lot of adult supervision when Arthur and his siblings entered their teen years.

Reportedly the Wahlberg brothers including Arthur became involved in both drug use and crime. And being the youngest of nine children, Mark idolized his older brothers.

The Shooter star’s desire to hang out with his older brothers significantly influenced his substance abuse and unwise choices. While Mark’s stay in prison is almost a general fact, he is not the only sibling to spend time behind bars.

Three of Mark’s brothers have also been to jail as well as one of his sisters who Mark says went to prison so many times that he lost count.

As for whether the brothers mentioned above include Arthur or not is still unclear. Nonetheless, one more shocking fact from those times is that one of Mark’s older siblings was so out of control that he even tried to break into a police officer’s home, Donnie once said in an interview.

Fortunately, their time behind bars was a fierce reality check that led them to turn their lives around – for the most part.

Arthur Has Acted In Several Films: What Does He Do Now?

Arthur has appeared in a handful of films; which include The Target, The Rude The Mad and The Funny, and Patriots Day.

His last film was the 2020 Spenser Confidential. The Boston native’s 2022 movie Simphony: Sinphony: A Clubhouse Horror Anthology where he plays Smitty is currently in post-production.

While there are seldom any updates from Arthur in recent times, it is reported that he spends most of his time remodeling homes. Arthur apparently also knows carpentry and also happens to have skills in remodeling.

The first Wahlberg son who allegedly lives in Worcester, Mass is nowadays busy with Arthur Wahlberg’s Crew a reality show in Boston. The Crew focuses on creating more awareness and funding for cancer research, veterans, and mental health issues.

They participate in many charitable events throughout Boston presenting and raising money for humanitarian purposes. They occasionally also give donations to the hospital, the cancer society, autism awareness,

His Other Sister Has Been To Jail Several Times

Arthur’s other sister, Michelle also had a rather problematic story; she in April 2008 while arguing with her live-in boyfriend, grabbed a firearm and shot it four times in his general direction.  The police arrested her on gun charges and sent her to prison.

The incident was the last straw for her brothers who cut off all communication with Michelle.  She had been in and out of the jail multiple times prior to that incident.

In interviews, she complained, “I cry myself to sleep every night thinking, ‘How can my brothers let me rot here in jail”. Michelle explained she never aimed the gun at her boyfriend, but instead used the shots in an attempt to scare him. The court, however, never considered her pleas and excuses.

It is unclear where things stand between the brothers and the sister now.

Does Arthur Wahlberg Have A Girlfriend/Wife?

Unlike Mark, the details regarding Arthur’s family life and significant other are quite scarce. His now seemingly inactive Facebook though tells the Patriots Day actor was engaged to a woman named Jennifer Gjulameti. Arthur apparently had asked Gjulameti to marry him on December 24, 2010.

In the past, Gjulameti mentioned Mark’s elder brother in her tweets, a few or two times. She has even posed for one or two images with Arthur and his famous brother Mark.

One such mention was back on June 29, 2011. Jennifer, as per then reports was the Community Manager for PUBG.

Jennifer additionally has also appeared in several films. And apparently, she is a SAG/AFTRA Actor and an Independent Film Producer.

Also, the fact that’s worth noting is that Jennifer Gjulameti’s Facebook says she is currently single. The couple never gave any explanation as to what went wrong or why they broke up.

Arthur Reportedly Has Three Children With His New Partner

Arthur allegedly has three children with his new partner, Theresa Serrani; though not much about this significant other of Arthur is out in the open. It is yet to be revealed when and how the couple started dating. They had their first son, Michael Wahlberg in Sep 2016.

From his brothers, the Test star is also an uncle of twenty-three nephews and nieces.

His Brother, Mark Is The Richest Among The Wahlberg Siblings; Is Arthur Also Rich?

Of all the Wahlberg brothers, Mark is clearly the richest with an estimated net worth of over $300 million. In fact, the Italian Job actor is one of the richest actors worldwide.

For decades, he has had a successful movie career, starring in some immensely popular projects. Mark not only banks in some serious cash through acting but he also does it through a bunch of different businesses. And this brother of Arthur is actually a really successful entrepreneur – he operates eight businesses.

Among his businesses is Mark Wahlberg Auto Group, a car dealership company based in Columbus, Ohio, a film and TV production company called Closest to the Hole, Aquahydrate is a water company, a nutrition business that sells healthy products and snacks, F45, a gym chain, Municipal, a clothing brand company.

Mark’s most popular business, however, is Wahlburgers. This fast-food restaurant chain is family-owned. And it has a pretty big following in the USA.

What though is left to interpretation nonetheless is the denomination of Arthur’s net worth or what and how much he brings for himself from whatever he is doing money-wise. While he very certainly could be a part-owner of the Wahlberg’s fairly successful business Wahlburgers, whether he is a nine-figure man is up for debate.

His net worth in any case should be in the domain of six to seven figures at the very least.