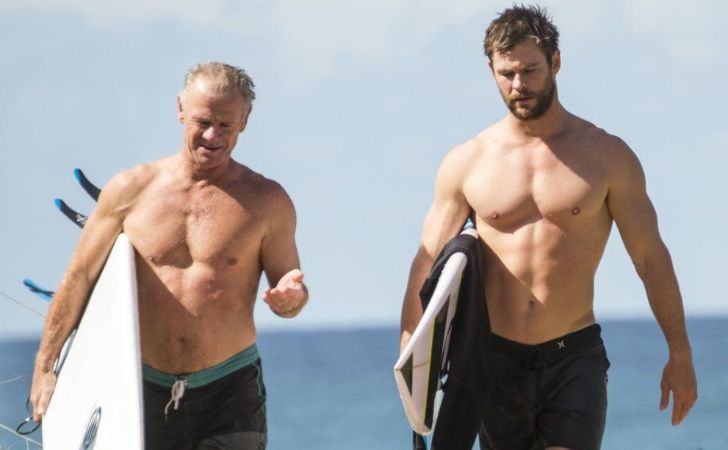 Craig Hemsworth is an Australian celebrity father and media personality widely popular as the father of the Hemsworth brothers- Luke, Chris, and Liam. With his three son’s rising fame and fortune, Craig also quickly became the talk of the town.

Although the father of three keeps most of his personal details to himself, he is often seen alongside his actor children from time to time. And for those of you who don’t know, Craig goes by ‘The Hot Dad’ all over the internet due to his fit body and good looks.

The three Hemsworth brothers definitely got some good genes. Here, we will try to uncover some lesser-known facts about the head of the Hemsworth clan. More about his age, wife, children, and family.

How Old Is Craig Hemsworth Now?

The media personality Craig Hemsworth is 67 years old as of 2022, though his date of birth is not revealed yet. He was born in Australia where he has spent most of his life.

He has a mixed ethnicity of English, Scottish, Irish, and German descent. Craig lived between Bulman, Northern Territory, Melbourne, and Philip Island where he raised his family alongside his wife Leonie Hemsworth.

Craig and his wife currently reside in Byron Bay, Australia nearby his oldest and middle child.

Having three famous sons and daughter-in-laws surely hasn’t overshadowed Craig’s own career line. He is a social services counselor by profession and has been working as one for a long time.

Though not much is known about his profession, he is often spotted alongside his sons. Back in 2016, Craig was spotted surfing and having a fun time alongside his middle child Chris.

Similarly, the 67-year-old gramps was seen shirtless jogging around Byron Bay along with Liam’s pet dogs back in September 2021. Even at such an old age, he seemed very fit and healthy as well.

All of the Hemsworth clans are very close to each other and even live nearby one another in Bryon Bay. Not to forget, while growing up the three brothers use to fight a lot and even had a habit of giving one another a good punch in the face once in a while.

Craig Is A Married Man; Who Is His Wife?

As many already know, Craig is married to the love of his life Leonie Hemsworth for a long time. The pair tied the knot a very long time ago and have been living together and raising their family.

Sadly, the details of their wedding and early love life are not revealed to the public at the moment. From their marriage, they share three handsome sons- Luke, Chris, and Liam.

As we’ve already mentioned above, Craig is the father of the three Hemsworth brothers Luke, Chris, and Liam. Well, all three of them are professional actors as of now.

His oldest son Luke was born on 5th November 1980 in Melbourne, Victoria, Australia. He stepped into the acting world in 2001 as Nathan Tyson in Neighbors. Likewise, Luke made his career breakthrough in the 2011 miniseries Bikie Wars: Brothers in Arms as Gregory Campbell.

Similarly, his other notable acting role is Ashley Stubbs in the 2016 television show Westworld. He starred in the show for seven years alongside Evan Rachel Wood, James Marsden, and Jeffrey Wright.

Some of his other work credits are Last Man Standing, All Saints, Neighbours, Tangle, The Bazura Project, Thor, Thor: Love and Thunder, Death of Me, and many more. His net worth is around $3 million in 2022.

Christopher ‘Chris’ Hemsworth was born on 11 August 1983, making him 39 years old as of 2022. The 6 feet 3 inches tall handsome hunk is widely popular for his portrayal of Thor in the MCU film series.

Although Chris has other big roles, Thor seems to be a trademark for life. He began acting in 2002 as King Arthur in Guinevere Jones. The same year, he joined his older brother Luke in Neighbours as Jamie Kane.

Chris made his breakthrough as Kim Hyde in the 2004 TV show Home and Away. He then landed the biggest role of his life, Thor in 2011. Since then, he has reprised his role as Thor in eight MCU movies so far.

His 2020 movie Extraction gained a huge attraction and eventually broke Netflix’s viewership record which was previously held by Bird Box. Also, it was Chris’ debut movie as a producer.

As of 2022, Chris Hemsworth is worth around $130 million. He was ranked 24th Highest Paid Celebrities on the Forbes list with estimated earnings of $76.4 million.

With his older brothers successfully creating their legacy in the entertainment world, it was only a matter of time before the youngest followed them. Liam entered the acting world with a guest role alongside his older brother Chris in Home and Away.

Likewise, Liam landed his first major role as Josh Taylor in the television series Neighbours alongside his oldest brother Luke Hemsworth. After that, he appeared as Will Blakelee in Julie Anne Robinson’s film The Last Song opposite his then-future wife Miley Cyrus.

Some of his other film and TV show credits are Independence Day: Resurgence, The Duel, Killerman, Arkansas, The Elephant Princess, The Muppets, and Workaholics. As of 2020, Liam played one of the leads Dodge Maynard in the Quibi TV show Most Dangerous Game.

Moving on to his grandkids, Craig has altogether seven grandkids as of now. From his oldest son’s marriage with Samantha Hemsworth, he has four grandkids.

They are Holly Hemsworth, 14, Ella Hemsworth, 12, Harper Rose Hemsworth, 10, and Alexandre Hemsworth, 9. Luke and Samantha wed on 15 December 2007 and have been together for about 15 years.

Likewise, from his second son’s marriage with Elsa Pataky, he has three grandchildren. They are India Rose Hemsworth, 10, and twins Sasha and Tristan Hemsworth (both 8).

Chris and Elsa started dating in early 2010 and got married in December of the same year.

Talking about Liam, he currently does not have any children as of 2022. Although he and pop star Miley Cyrus from 2018 to 2020, they do not share any children together.