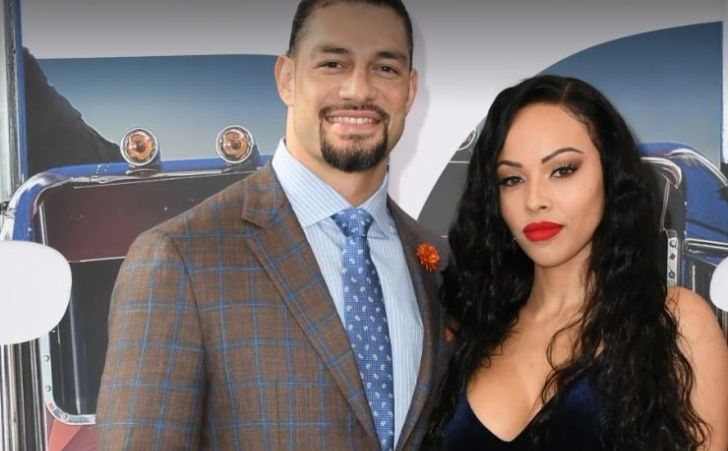 Galina Becker fully Galina Joelle Becker is a former collegiate athlete and ex-fitness model who is better known as the wife of WWE wrestler Roman Reigns aka The Big Dog.

Becker’s husband, Reigns has been one of the most successful wrestlers in the last decade in the world of professional wrestling. Not only has he defeated big names inside the ring, but he also battled leukemia with his passion and determination to claim the top spot in WWE today.

Reigns and his spouse, Becker both have a background in athletics; while Reigns played football growing up, Becker was involved in track and field. Latch on to a greater deal about the WWE superstar’s wife in the excerpts below; slide through the details regarding her early life, parents, relationship with Reigns, and further.

Similar To Her Husband, Galina Becker Is Also From Florida

The 35 years old Becker was born on March 11, 1987, in Jacksonville, Florida. She, however, grew up mostly in San Jose, California. Becker reportedly is of African-Americans descent and is the youngest among the three children of Mildred Becker and Kevin Becker.

Her siblings include Undine Becker and Molisa Cooper. She attended Mount Pleasant High School where she was also a performer in hurdles and high jumping.

Becker lettered in track for three seasons while at Mt. Pleasant High School in San Jose, California. Later, she graduated in management from the Georgia Institute of Technology.

Galina Becker Was A Collegiate Athlete And A Pretty Good One

Galina Becker was an athlete at university and pursued track and field for a few years. Becker was her college’s team’s Most Valuable Performer in her freshman, sophomore, and junior seasons.

The 5 feet 8 inches tall Becker allegedly pursued athletism and fitness after her elder sister, Undine Becker. Undine, herself, was a sportsperson and inspired her sister to excel in athletics.

She still holds the Central Coast Section record in the triple jump with a mark of 40’5. Further, she was also the winner of regional titles during her sophomore and junior years there.

Interestingly, Steve Nelson, who is an NFL player, coached Reigns’ wife, Becker. During her college, Becker also completed the 60m hurdles in a season-best time of 9.48.

Apart from athletics, Galina also had a keen interest in volleyball and she was apparently a good volleyball player. In fact, she lettered in volleyball for one season.

How Did Becker Meet Her Husband Roman Reigns?

The current WWE Champion Roman and his wife, Galina met when they were studying at the Georgia Institute of Technology. At the time Becker was performing track and field and Roman was a footballer.

The wrestler from the Anoa’i race, Reigns once said when he and Becker first met they were just having fun. He then added how they were kind of like glued to each other and just not having a care in the world or [worrying] about anyone but them, but that since has changed.

Reigns and Galina got engaged in Feb 2012. The couple, however, didn’t announce their engagement until early 2014.

The same year, the pair married each other on a private island, Castaway Cay, in the Bahamas on December 6, 2014. It was a Disney-owned Island. Their wedding song was A Whole New World from the 1992 animated movie, Aladdin.

The Head of the Table, Roman Reigns, and Galina Becker’s wedding took place while Roman was away from the WWE because of an incarcerated hernia. The ex-NFL player, however, returned to action not long after the ceremony, getting back into the ring at TLC: Tables, Ladders & Chairs in December of the same year.

While Reigns doesn’t parade his spouse and children on his socials or even mention them during the interviews, he and Becker are believed to be very much together.

Becker and her six-foot-three-inches tall husband, Reigns have five kids, a daughter, and two sets of twins. They had their first child, daughter, Joelle in December 2008 when they were still dating during college.

Eight years later in 2016, Galina and Reigns welcomed twin boys. Then in 2020, Roman announced his wife, Galina was pregnant once again with another set of twins.

And in May 2020, the former defensive tackle revealed they are now a “family of five.” The details of their new twins, however, are a bit few and far between.

In fact, Becker’s husband didn’t talk about them publicly for more than a year. The WWE star first talked about them during his interview with Jimmy Fallon in November 2021 where he said his and Galina’s little ones are now “a year and a half.”

Becker’s husband Reigns has said he would “love to” have more children and that he’s looking forward to eventually retiring and being at home for his wife and children most of the time.

Galina Was Also A Model; What Does She Do Now?

In addition to being a reputed college athlete, the Jacksonville native also appeared on television as a fitness model after her graduation. As a model, she has done photoshoots with Michael Krinke.

The wife of the ex-Minnesota Vikings player and the former athlete Galina became a fitness model after graduating from GIT. As a fitness personality, she reportedly was active in visiting gyms and outdoor activities.

While she is not active on social media, Becker’s Twitter account in 2014 confirms she was a model then. Galina, now, instead, focuses more on being a full-time mother and raising their five children.

The ex-Shield member, Reigns in Feb 2019 with Good Morning America talked about the toll his health struggles took on his wife and children, explaining,

“Sometimes it’s our families that suffer the most. We’re just in it and we’re just trying to overcome and just move on to the next day and continue to progress, and they are the ones worrying to death.”

Roman said his family nonetheless had been his rock & added that their support was the most important thing. The father of five had first battled the disease at the age of 22.

Two years after Becker gave birth to her and Reigns’ baby boys, the latter revealed his leukemia came back. Roman made the announcement on Oct. 22, 2018, on the night in Providence, Rhode Island.

The Pensacola native at the time said he had been battling leukemia for more than a decade and that cancer had returned to his body. Reigns further stated how he had to give up the Universal title and go away indefinitely for treatment.

Four months later, in Feb 2019, Reigns returned to WWE and announced his remission. In an interview, he revealed he had to go through oral chemotherapy treatment during which he made a relatively speedy recovery.

However, on April 3, 2020, Reigns pulled out of the Wrestlemania 36 amid concerns surrounding the COVID-19 pandemic and the fact that he was immunocompromised from his leukemia.

Following WrestleMania 36, Joelle’s father, Reigns continued to remain absent from WWE programming in the midst of the pandemic. Explaining the absence to Hindustan Times, Roman said,

“For me, I just had to make a choice for my family. The company (WWE) has done everything that they can to make it the safest work environment possible..”

Reigns returned at SummerSlam on August 23, 2020. Since his comeback, Reigns has been focusing on raising awareness of and money for pediatric cancer.

Although Galina is apparently on Instagram with a handle name, @galinabecker965, she hasn’t posted any updates since 2017.

She is also evidently inoperative on Facebook. Her on-the-shelf Insta page mostly includes pictures of her in her wedding dress with Roman & her daughter, Joelle.