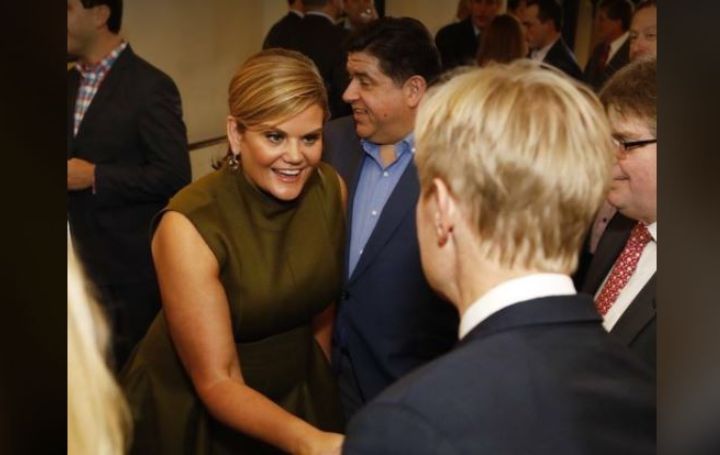 Mary Kathryn Muenster is the current first lady of Illinois as such her husband Jay Robert JB Pritzker is a businessman, philanthropist, and politician who is currently the 43rd governor of the Prairie State.

Muenster’s spouse Pritzker is also an investor through several of his companies that focuses on projects like private equities and venture capital firms as well as investing in IT and software companies. He mainly co-owns the Pritzker Group.

Muenster who also goes by her initials MK and her politician/businessman husband have been together since the early 90s and the two are also parents to two children. Read a bit extended version of JB’s wife, Mary Kathryn Muenster’s life; her onset in the media, her relationship with Pritzker, her own professional doings, and more.

Mary Kathryn Muenster Is A Midwesterner

The now 56-year-old Mary Kathryn Muenster was born in South Dakota in 1967/1966. Unlike her husband who is a West Coast Jew from a superrich clan, Mary is a Midwestern Protestant from a family that was comfortable but not wealthy.

She is a native of South Dakota and was born in the 10,000-person town of Vermillion, South Dakota. Muenster grew up in the Midwest and spent a lot of time with her “Grandma Marce” on her small farm in a tiny house in Nebraska.

Mary says her grandmother was the most amazing person who taught her how to knit and farm and the importance of giving. The future first lady fed the pigs every morning.

Her grandparents weren’t well off but Mary says it was the best time nonetheless. Muenster was also the church secretary at the First Christian Church in Beatrice, Nebraska, and she would collect the donations.

Both Of Mary Kathryn Muenster’s Parents Were Also Into Politics

Muenster is one of three children of Theodore and Karen Muenster. She has an older brother Tom and a younger brother Ted.

Her father, Ted, had re-located to Vermillion from Nebraska to work in the University of South Dakota’s political science department. Afterward, he became chief-of-staff to South Dakota Gov. Richard F. Kneip.

Mary’s father, Theodore also ran for the U.S. Senate in 1990 but lost to Larry Pressler. M.K.’s mother, on the other hand, was a South Dakota state senator from 1987 to 1993. Some of Muenster’s family still live in South Dakota.

The mother of two is now the president and director of the J.B. and M.K Pritzker Family Foundation, which aims to foster effective solutions to early childhood, community, and women’s health issues. Muenster in addition is a trustee and director of the Northwestern Memorial Foundation. She is also a founder of the Evergreen Invitational, which addresses women’s health issues.

Muenster deeply cares about women’s health and community health and has been involved in that area for 12 to 15 years and hopes to continue in that vein. In the meantime, she is also an investor in a company called Retrofit. It uses mobile technology to help companies help their employees lose weight.

One of the reasons she invested in the company was to help her husband who allegedly stands at a height of 5’10” with a bit of excess weight lose some of his own.

Mary Kathryn Muenster’s Relationship With Her Husband J. B. Pritzker

Mary married J. B. Pritzker in 1993. The Washington, D.C.-based president of the World Union for Progressive Judaism and the rabbi, David Saperstein performed Pritzker’s and Mary Muenster’s marriage.

JB and his wife met in 1988 when the former used to work as a part-time legislative aide to California Democratic U.S. Rep. Tom Lantos, a Holocaust survivor.

He was also among the staff of Democratic Sen. Alan Dixon of Illinois. Pritzker was then also attending Georgetown University.

They encountered each other in Washington, D.C. when the native of South Dakota was working as an aide to U.S. Senator Tom Daschle of South Dakota. To say more, the two met at “The American cafe.” It was a blind date for lunch; a mutual friend thought they ought to meet.

During his and Mary’s first date, unfortunately for the billionaire, he forgot to bring money. Recalling their first meeting, JB said

“It was lunch and a blind date. I was bowled over. But while we were looking at the menu, I realized my wallet was in my car four blocks away.”

After realizing he had forgotten his wallet, JB excused himself — and “SPRINTED” four blocks wearing a blazer and tie. He eventually returned 10 minutes later thinking he had screwed up the date.

Remarking on the moment, MK said,

“I was wondering what was up with this guy who came back sweating and breathing heavily?”

Ironically, when Mary met JB, at the time, she was dating the center on the school’s basketball team, revealed Pritzker in April 2017.

JB admits to feeling like he had no shot. MK says it was JB’s great sense of humor that made a huge impression on her.

She also found his good mannerism and kindness attractive. They dated for three and a half years after which Pritzker worked up the nerve to ask Mary to marry him. The parents of two married in 1993, the same year JB graduated from Northwestern University Law School.

After the marriage, MK and her husband JB settled in Evanston.

The couple calls themselves by their initials, JB and MK, and friends have joked that if they should call their kids ‘A,’ ‘B,’ and ‘C.’ Pritzker states the fact that he and his wife both went by their initials was a sign that their love was “written in the stars.”

Muenster’s husband describes her as “my partner in everything.” Of her governor husband, Mary once said,

“I’ve known him for 30 years and not once has he let me down. He will not let the people of the state down. He truly cares. We’ve been married for 24 years and I’ve never seen him so excited; hoping to get people’s lives back on track; helping those who have little or no help.”

She considers herself incredibly fortunate and lucky to be the wife of the California-born political leader.

“First of all, I am married to a man who supports me and everything that I do. And I know this is not the case everywhere.”

The Husband And Wife Are Supportive Of Each Other’s Jobs

MK is strongly supportive of her husband’s campaign for Illinois Governor and says nothing has made him more excited. The wife of a multi-billionaire entrepreneur, Pritzker says her spouse is equally supportive of her and everything she does, and that he cares about women’s health issues, which are important to her.

Aside from supporting his business and political moves, Muenster helps her husband in more personal areas as well. The couple lives in the Gold Coast neighborhood of Chicago with their two children. They have a daughter, Teddi [Theodora] named after M.K.’s father, and a son Donny, named after Pritzker’s late father, Donald.

How Rich Are Mary Kathryn Muenster In-Laws, The Pritzkers

Muenster’s in-laws the Pritzkers have been consistently finishing near the top of the Forbes “America’s Richest Families” list since its 1982 inception.

Mary’s husband’s family is a powerful Chicago family. The Ukrainian origin dynasty spent the 2000s feuding over trusts and eventually divvied up a fortune that includes Hyatt hotels.

Their fortune mostly came from Hyatt and from their investments in industrial conglomerate Marmon Group, now owned by Berkshire Hathaway. The family also boosted their wealth from past holdings including the Superior Bank of Chicago (though it collapsed in 2001), Braniff airlines, McCall’s magazine, the Trans Union credit bureau, and the Royal Caribbean cruise line.

Today, the Pritzker family is the 15th wealthiest family in the world. Their combined net worth sits at around $33.5 billion. The Pritzker family is based in Chicago and has 11 billionaire members; many still have stakes in the publicly traded Hyatt Hotel chain including Muenster’s husband.

How Does Mary’s Husband JB Pritzker Make His Money?

As mentioned, Muenster’s husband is also one of the wealthiest politicians in the US with a net worth of over $3.6billion.

Not to mention, the Duke University graduate is one of 11 billionaires in the Pritzker family.

Her partner, JB also benefits from his ties to the Pritzker family and their multi-billion dollar business Hyatt Hotel chain and the Marmon Group.

Also adding to his fortune is another of his successful venture capital firm, New World which invests in IT and software companies and has provided funds to more than 50 companies thus far.