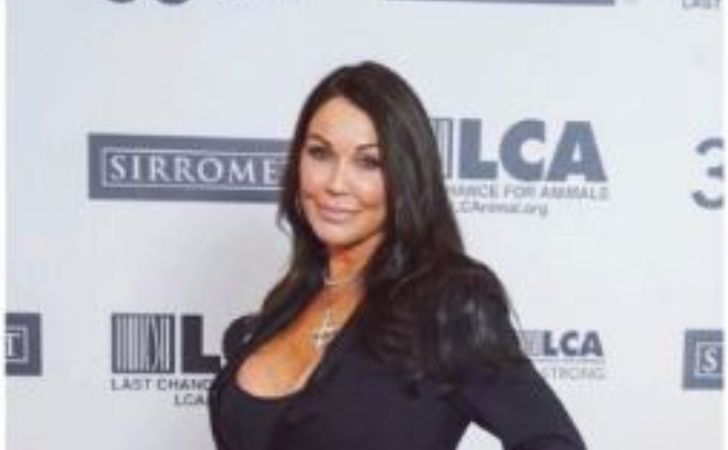 Kristi Gibson, 52, is a Canadian-American actress and former model. She is popular for her work in movies and TV shows like Bret Michaels: Life As I Know It, A Letter from Death Row, and The Untold Story.

Apart from her own successful career, Gibson grabbed attention after her 18 years long relationship with musician and actor Bret Michaels. The pair first linked in 1994 and were in an on-and-off relationship until 2012.

During their 18 years of relationship, they welcomed two children, Raine Elizabeth Michaels and Jorja Blue Michaels. Why did Bret Michaels and Kristi Gibson end their almost 2-decade-long relationship? Is Kristi now dating anyone? Here is everything about her!

The American actress Kristi Lynn Gibson was born on 25th December 1970 and is 52 years old in 2022. She was born in Vancouver, British Columbia, Canada. She also goes by her nickname, Gibby.

Besides, Kirsti holds dual nationality- Canadian and American and has a Caucasian ethnic descent. Although the details about her family members are still scant in the media, Kristi often shares pictures of her parents on her Instagram handle. Her mother and dad have been married for 61 years as of 2022.

Back in May 2021, Kristi paid a tribute to her parents in the honor of their 60th marriage anniversary with a combined before and now photo on Insta,

Talking about her siblings, Gibson grew up with her two sisters named Carolle and Karen.

Though Kristi was making her way into the entertainment world as an actress, she rose to the spotlight after her relationship with American singer, musician, and actor Bret Michaels.

The former partners first met in 1994 and their chemistry quickly took off. Likewise, the pair took their relationship to the next level when they decided to welcome their first child Raine Elizabeth Michaels in 2000.

Back then, the family of four lived in an 11,000 sq. ft mansion worth $10.5 million located in the gated Silverleaf community of Scottsdale.

In 2010, Michael shook the world when he proposed to Kristi on the final episode of Bret Michaels: Life As I Know It.

During his proposal speech, Bret said:

“I love you, and you’ve been unbelievably a big part of my life, and we have two beautiful girls together. … I know we love and respect each other, and I hope that we can find that inner love that we have forever. And I want you to be my wife.”

“Please say yes, or the rejection will kill me right now.”

Bret ended his statement with, “Kristi- she’s the one who put up with me all these years.” And obviously, Gibson said YES to the rock star.

Unfortunately, the power couple ended their engagement just two years later in 2012. Though the couple survived many highs and lows in life, two years of engagement was enough for them to realize things will not work out.

Why Did The Former Partners Call Off Their Engagement?

As mentioned above, Michaels is a musician, singer, and actor by profession meaning he spent most of his time on-road traveling and working. Despite his efforts of being there for his partner, fights and irreconcilable differences were inevitable.

And the same goes for Kristi and Bret. Though Kristi was there for Michaels while he was battling life-threatening health issues, the pair could not make it work out.

After calling off their engagement, Michaels talks about his failed relationship with People. He said,

“The reason for the destruction of all my relationships is that I’m passionate about being on the road and making music, The women I date don’t realize that I spend between 6 and 8 months of my life on the road — touring or traveling or seeing family with my daughters.”

Clearly, Bret’s busy schedule and the tour are one of the main reasons for their failed relationship.

Although Krisi and her boyfriend-turned-fiance are not romantically linked together, they remain good friends and are raising their daughters in peace.

Is Kristi Gibson Dating Someone After Michaels? Have They Reconciled?

The mother of two is allegedly single in 2022. She has remained private regarding her personal life after parting ways with her long-time partner Bret.

Likewise, she is rarely seen with a possible date in public. However, on 9th August 2021, Gibson posted a picture of her and Michaels with the caption “Happy Anniversary.” This post stir some air but the pair decided to stay mum regarding the topic. Also, there is no news of their wedding.

Before proposing to Kristi, Michaels had tried to find the love of his life three times via his reality TV dating competition series Rock of Love with Bret Michaels.

Whilst Bret’s three attempts, he could not find love in any of the girls named above.

What Does Kristi Gibson Do For a Living?

She is an actress and model by profession. Talking about her career, the 52 years old made her acting debut as Kristi Richards in the 1998 film A Letter from Death Row. The film also stars her then-future fiance Bret Michaels.

The same year, she got an opportunity to play a minor role in the action crime movie A Code of Conduct. Some of her other acting credits are E! True Hollywood Story, Bret Michaels: Life As I Know It, and The Untold Story.

How Rich Is Actress Kristi Now?

According to various online tabloids, Gibson holds a net worth of $12 million in 2022. On the other hand, her former partner Bret is worth around $14 million as of now. He earns his wealth as an actor, singer, and musician.