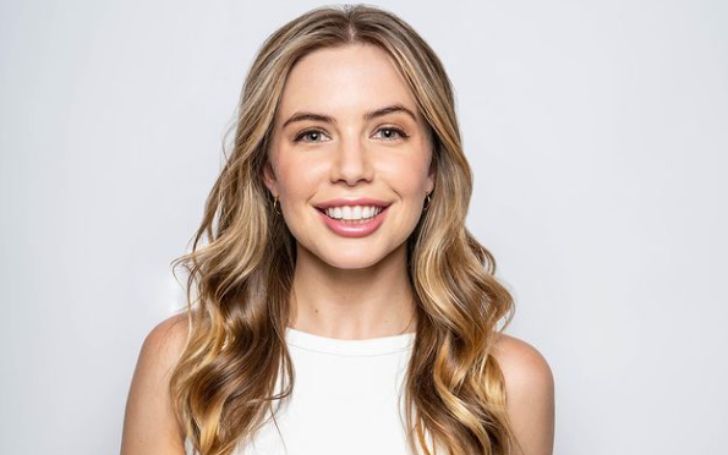 Meghan Payton is a professional Sports Betting Host/ Analyst, & Sports Reporter. Along with her successful career, she is also famously known in the media as the daughter of former Saints coach, Sean Payton. Like her father, she is also a huge sports enthusiast.

Therefore, in this article, we will dive deep into the life of Meghan Payton. Who is she besides just being the daughter of a famous father? Is she single or dating a boyfriend? Let’s find out together!

Meghan Payton Was Born In 1996 in Dallas, Texas

1996 born, Meghan Payton is the daughter of former football coach/quarterback, Sean Payton, and mother Beth Shuey. She was born 4 years after her parent’s marriage. As of 2022, she is 26 years of age.

On her father’s side, Payton is an Irish Catholic. Although she was born in Texas, she spent most of her childhood in Mandeville, Louisiana after her father was given the position of head coach at Saints. She lived there for half a decade and then the family moved back to Dallas, Texas.

Furthermore, Meghan is not the only child of her divorced parents. She has a younger brother named Connor Payton who just turned 22 in March 2022.

After returning to her birthplace, Payton was enrolled in Argyle Liberty Christian School. There, she became a cheerleading squad member until her graduation in 2015. After graduation, she went on to pursue a degree in Media Production and Sports Broadcasting at Pepperdine University.

Meghan’s Parents Are Not Together: Separated From Each Other In 2012

Payton’s parents, Sean and Beth, were married to each other for almost 20 years before separating in June 2012. This must’ve impacted this sports broadcaster, who was just a 15-year-old at the time.

The former couple met at Indiana State University where Meghan’s father used to work as a coach and her mother was a student. Soon enough, they fell in love and married on July 11, 1992. However, after 20 years, Sean filed a divorce against his wife. The reason for this isn’t quite known but a few sources confirm that it was due to a conflict of personalities between the husband and wife.

Surprisingly, the divorce did not seem to leave any great negative impacts on their children. Both Meghan and her brother are very close to their parents even today.

Following the divorce, both Beth and Sean remarried. Meghan’s mother married Jamie McGuire in September 2020, while her father married Skylene Montgomery in 2021. Today, Payton also has two step-sisters from her mom’s side.

Meghan Payton Is Into Sports Just Like Her Father

As mentioned earlier, Payton is as into sports as her father. Sean Payton is a great name in the history of American Football. He worked as the head coach for New Orleans Saints from 2006 to 2021. During his tenure, he also led the team to its 1st Super Bowl Victory in 2009. In addition to this, Meghan’s father is also a former quarterback.

Well, though Meghan is not into sports physically, she has chosen a career close to sports. In simple words, she is a sports broadcaster. When in college, she worked as an intern for NFL Network. Later, after graduation in 2019, she was appointed as the New Orleans Saints sideline reporter. This is also when she got a chance to interview her own father. It must’ve been a proud moment for this father-daughter duo.

Recently, in August 2021, she started working at Chat Sports as an on-air host for all of their NFL platforms. Therefore, today, Meghan Payton is a huge name in the NFL network. She is continuing with her remarkable job of covering news on sports.

Payton Is Engaged To A Comedian/Writer

This former head coach’s daughter Meghan is currently in a very committed relationship with Christopher Titone. The lovely couple recently got engaged on 23rd March 2022. They met somewhere in 2015 and immediately hit it off.

Unlike his beautiful wife-to-be, Titone is a writer and an actor. Home Team is the movie that he wrote which is roughly based on the life of his father-in-law. It is a famous Netflix film that covers the story of the life of Sean Payton during his suspension for the 2012 NFL season.

Moreover, Meghan’s husband-to-be Christopher has worked as a comedian in various movies like Hubie Halloween, The Wrong Missy, and Father of The Year. This up-and-coming comedy actor is the brother-in-law to Adam Sandler. This means, Titone is the brother of Jackie Sandler, who is also an actress.

When Are They Getting Married?

Since the couple is already engaged, there is a high chance that they might get married soon. However, they have not talked about their wedding plans yet.

Is Meghan Payton As Rich As Her Dad Too?

As we said, she primarily makes money from her career as a sportscaster and analyst.