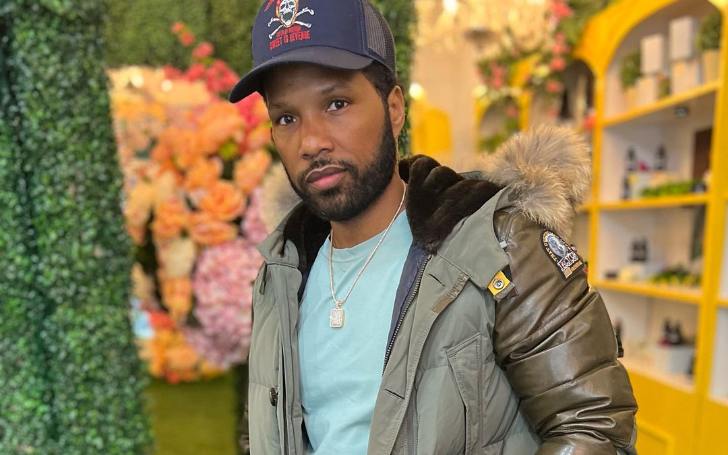 Mendeecees Harris is a reality TV star, a former real estate entrepreneur, music manager, and Rapper. He rose to prominence after his appearance on the VH1 reality TV show Love & Hip Hop: New York alongside Tahiry Jose. Further, since season ten, he is the main cast on Love & Hip Hop: Atlanta.

Besides, he is in the limelight for marrying the lady of his life Yandy Smith. His lady love Yandy is an American actress, producer, and businesswoman. Further, she is an owner of a fashion company and a restaurant. Both the couple co-starred in the VH1 reality show, Love & Hip Hop: New York. Their televised wedding, Harris’s teen-sex trial, and further imprisonment arouse curiosity in people. So, what was the reason behind his imprisonment? Apart from this, let’s know him as a person and his family life.

The article is going to include all his personal and professional details, from his age and early life to the controversy he dealt with, his family life, marriage with Yandy Smith, children, and many more. Read till the end.

Mendeecees was born to the father Roberto Harris and the mother Judy Harris on the 26th of October, 1978 in Harlem, New York, United States. As of now, Harris is 43 years of age.

His parents parted ways when he was in his early days so, his mother Judy raised him as a single parent along with his other three siblings.

Similarly, talking about Mendeecees’s siblings, he has a big brother named Tyrus Harris, a little brother Kareem Harris who is no longer in the world, and a little sister Neff Harris.

Besides, he belongs to the Panamanian-American ethnicity as his both parents were Panamanian by birth. He is American by nationality.

Mendeecees Harris’ Career Detail: How Did He Start?

Mendeecees is a media personality who, at first, came to the limelight after he appeared as a supporting cast member in the reality TV show Love & Hip Hop: New York, seasons three, five, and six. He is also the main cast of season ten of Love & Hip Hop: Atlanta. But before joining TV, he was a real estate entrepreneur. He started his career in the real estate business right after he completed his higher school studies.

Sometime later, he decided to move to the music industry as he was interested in music since his childhood days. There, he became a celebrity manager and worked for some famous rappers such as Vado, Websters, and many others at a time. Eventually, Harris established his own music-recording studio named, Beat Factory in the Bronx, New York, and continued his passion for music.

Likewise, Mendeecees is a professional DJ. Alongside, he organizes several events and music concerts. Similarly, he is a rapper, and side by produces music from his own recording studio.

Controversies In Mendeecees Harris’s life: He Was Accused Of Sexual Assault

Back in the year 2013, the owner of Beat Factory was accused of sexual assault. A teenage girl accused him saying that he compelled her into oral sex in exchange for money when she was just 15 years old. For the accusation charge, Harris even went through a trial in July 2013. In the question ” Is he guilty of any of the charges”, asked by his attorney, Harris had an instant reply,

” No.  No way. No, no”.“I never had a relationship with her, she never extended herself,”

During that time, he went through one of his life’s worst conditions but he stood strong and defended himself. He further testified with the statement,

“That’s the truth – never, never – I never committed none of them acts to that girl in my life.”

Later, he was found innocent and respectfully released from all charges put against him.

Mendeecees Harris was Imprisoned: What Had Happened?

Two years after the controversial sex trial, the reality TV star was charged with drug trafficking in December 2015. He was accused of heroin and cocaine transportation worth $2.5 million from New York City to Rochester between the years 2006-2012. Eventually, he was jailed and regarding this, his attorney Donald Thompson responded by saying,

“The possibility of a jail sentence has been well known in the community and he’s talked about that with kids who are coming up in difficult situations and have to make life choices, whether it’s a good idea to make a whole lot of money selling drugs or make less money and not have to be looking over your shoulder.”

For the charge, he was sentenced to prison for 8 years. During those times, his spouse Smith stood by his side and never gave up on him. With all the support from his partner and his determination, he continued the legal fight to prove himself a minor participant in the drug case so as to reduce his imprisonment. Finally, he succeeded in his legal fight, and in January 2020, he was released from jail and reunited with his family.

Harris married his now-wife Smith two times. First, the couple tied the knot on the 25th of May 2015 in New York City, and their wedding was televised in Love & Hip Hop’s special episode with the title “Love & Hip Hop Live: The Wedding“. Shortly, after their wedding, Harris went to prison on drug trafficking charges.

In the meantime, their marriage gained a lot of criticism after his spouse Smith spoke of her unlegalized marriage with Mendeecees on one of the media platforms.

Later, after Mendeecees came out of Jail, the duo once again shared vows which he displayed on his Instagram account on September 6, 2021, with a caption,” @yandysmith – She stayed down so we can come up.. and I love u forever ever! 🤞🏽👩🏾‍🤝‍👨🏽”.

Before getting into the relationship with his now-wife Yandy, he previously dated two ladies named Samantha Wallace and Erika DeShazo. By profession, his ex-girlfriends Samantha is a dental hygenist and Erika who was Mendeecees Harris’ co-star in the VH1 reality TV series Love & Hip Hop, is a licensed NY realtor and a fashion designer.

Similarly, with both of his ex-partners, he shares a son.

Mendeecees Harris’ Kids: He Is A Proud Father Of Four Children

Once, on the occasion of father’s day, his life partner Smith mentioned him on her Instagram as a loving father. She wrote,

“There are hundreds of reasons I love you. But one above many is the father you are. Our babies love you. Even with no real example of what a father should be. You’re a dad, every day all day that is your number one priority to be ‘dad’.”

Mendeecees Also Has An Adopted Daughter

He has another daughter named Infinity Gilyard whom his wife Yandy adopted in the year 2019. Infinity became part of his family when he was still in jail.

Talking about his adopted daughter, well, she was born on March 8, 2002, and as of 2022, she is 20 years of age. She is now a college student and has already started her career as a Youtuber.

Now, talking about his social networking sites, Mendeecees is hugely active on Instagram under the username @mendedecees with 2.2 million followers and has 1,751 posts in total. Further, he is on Facebook with 572 followers.

What Is the Net Worth of Mendeecees Harris?

Throughout his life, he has made a good fortune earning from his multiple profession. Though he went through some dark phases in his life, he never gave up and continued his professional career as a music creator, professional DJ, and many more.

Hence, Harris has a net worth of $250,000 as of 2022 and living a lavish lifestyle alongside his blended family.