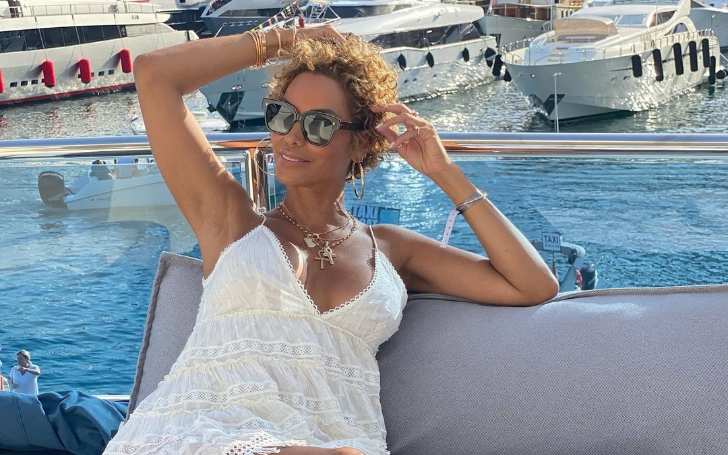 Nicole Mitchell Murphy is an American TV personality, businesswoman, producer, and former model. Further, she is also an actress best known for her work in the 2009 short movie, Shut the Fuck Up, Just love, and the TV series, Hard Knocks.

Besides her career, she is in the limelight being the ex-wife of the American comedian and actor Eddie Murphy (Edward Regan Murphy). Eddie is a Brooklyn native best known for his memorable role in movies like Dreamgirls and Boomerang, featuring Halle Berry. Nicole and Eddie were married for 13 years and later separated. So, what was the reason behind her separation? Do they together have kids?

Here in this article, we are going to talk about every personal and professional detail of Eddie Murphy’s ex-spouse Nicole Mitchell Murphy. To know about her, read this article till the end.

Nicole (birth name, Nicole Ronnette Mitchell) was born to her father Eddie T. Mitchell, and her mother Ellen Mitchell on 5th January 1968 in Sacramento, California, USA. By 2022,  she is 54 years of age and has the birth sign Capricorn. She grew up in her hometown alongside her three siblings named, Trevor, Darius, and Nathan.

Now, talking about her parents, Nicole’s father Eddie was a pilot in US Air Force while her mother was a housekeeper. As of now, both of her loving parents are no more in the world. Her daddy passed away in the year 2012 while her mom died 7 years later on November 4, 2019.

Besides, Nicole belongs to a mixed ethnical race as her dad was African-American and her mom was British. Likewise, she is American as per her nationality.

Nicole Mitchell Murphy Began As A Model: Her Career Details

The TV personality first started her career through modeling just at the age of thirteen. Soon after, Nicole took part in an international modeling contest and won the title. After that, she was signed by the World famous American modeling agency named, Ford Modeling Agency. Subsequently, her modeling career geared on when she joined Glamour Models, the Paris-based agency.

Further, she also became a brand ambassador and represented several top brands like Chanel, Ungaro, Valentino, and Yves St. Laurent. As a model, Mitchell also appeared in Europe’s fashion capitals. Now, she is a retired model and has tried her hand in multiple professions.

Apart from being a model, she is also a businesswoman. She is the owner of the online shopping store YFOY which sells skin care products and wellness products. It has the facility to ship the products to international countries too.

Further, a California-born former model is a Jewelry designer. She is the CEO of her jewelry company named FLP (Friendship, Love, and Peace) which manufactures handmade Jewelry for both men and women. Likewise, in 2014, she also worked as the host of the reality TV show titled Global Beauty Masters.

Moreover, Nicole is a known personality in Hollywood as she has appeared in a different reality and TV shows like Hollywood Exes, Live with Kelly and Ryan, The Wendy Williams Show, Home & Family, Steve’s Talk Show, and many others.

She Is Also An Actress And Producer

As an actress, she made her debut in a short movie named Shut the Fuck Up in 2009 in which she starred alongside Tom O’Leary and Steve Wilson. Nicole also acted in a 2016 comedy movie named Just Love alongside Claudia Jordan, Medina Islam, and Jackee Harry.

Likewise, she worked as an executive producer in 33 episodes of the TV series Hollywood Exes from 2012 to 2020.

Nicole Mitchell Murphy’s Marriage And Divorce With Eddie Murphy: How Did They Meet?

The former model, Nicole, and actor Eddie Murphy walked down the aisle on the 18th of March 1993. They shared the vow at the Grand Ballroom at The Plaza Hotel in New York after dating for 2 years. At her wedding, Bria. L Murphy (their daughter) served as a flower girl and Nicole made a bridal entry with the song, Don’t Give Up On Love.

In the grand celebration, the former couple promised each other a lifetime commitment.

The former married couple first came across each other in the year 1988 in the NAACP (National Association for the Advancement of Colored People) Image Awards Show. Soon after, they started seeing each other and later moved in together.

Before their marriage, Nicole and Eddie had already welcomed their bundle of joys whom they named Bria. L Murphy. Later, they become the parents of four more children.

Unfortunately, just like every good thing eventually comes to an end, their relationship too suffered the same fate. The couple, after 12 years of their marital relationship, decided to separate.

Nicole filed for divorce against her then-husband Eddie citing irreconcilable differences and finalized their legal separation on 17th April 2006. As per reports, Nicole got $15 million as divorce settlement amount.

As of 2022, all her kids are grown up and are settled professionally. Her firstborn daughter Bria whose birth date falls on November 18, 1989, is an American model and an actor. Likewise, Shayne, born on October 10, 1994, is an aspiring model. Similarly, Zola who celebrates her birthday on December 24, 1999, is also in the footsteps of her elder sister and mother, She is also a media personality.

Further, Nicole’s youngest daughter Bella, born on January 29, 2oo2 is an American actress known for the movies Coming to 2 America and Fairyland. The only son of Nicole with her ex-spouse was born on 7th November, 1992.

Nicole Is A Grandmother As Well

Nicole is already a grandmother of a 3-year-old granddaughter named Evie Isla Murphy. Evie is the child of her son Miles and his girlfriend Carlos Olivia. She was born on July 6, 2019.

Nicole keeps posting her granddaughter’s adorable photos on her Instagram account captioning, “So in love with her 🥰, My Evie baby, Her smile is everything 🥰🥰🥰”.

After her separation from Eddie in 2006, she kept occurring in the media due to her relationship rumor with several men. In the year 2007, her name came up with the NBA star Michael Jordan who was newly divorced at the time but Nicole never accepted it officially. Then after, there was gossip everywhere that Nicole is dating Caicos Prime Minister Michael Misick.

Likewise, she was rumored to be in romantic affairs with Nick Cannon, Drake, Jimmy Jackson, and others. With all these men, her relationships remained just the subject of gossip. Among all these, between the years 2008 to 2014, she was in a serious relationship with Michael Strahan, The Good Morning America Host, and even was engaged to him which they called off later.

In 2019, Nicole was captured on camera while kissing director Antoine Fuqua in Italy. The photo caused a stir in the media as the director was a married man and the father of two children. Nicole later came out to the media and apologized for her scene with Fuqua.

She told, “It was a moment that should not have happened. I regret it, “I apologized for it. I’m a human being, it was a mistake.”

Further on Wendy William’s Show, she said, “It was a frozen-in-time thing, “Trust me, I wish it didn’t happen. It was a moment where I should’ve thought more through the situation. Make better judgments. It’s something I apologized for.”

Is Nicole Mitchell Murphy Dating in 2022?

As per the article in Atlanta Black Star, she may be in a romantic relationship with an unknown man. She was captured with a man who at the moment was wearing white T-shirt and blue shorts. Seeing this, people made assumptions that maybe she is dating this mysterious man.

However, she has not come out with an official statement regarding this news. Moreover, going through her social media account, it does not seem like she is dating anyone. After the kissing scandal with director Antoine, she seems to be fully focused on her family, her career, and her grandchild.

But who knows, maybe she is in a relationship or may not be. It just remains an assumption until she responds to all the questions surrounding her current affair.

Eddie’s ex-wife is hugely active on Instagram under the username @nikimurphy with 1 million followers. Further, she is also on Facebook with 33,567 followers.

Going through the article, we already know that Nicole is a career-oriented person. She has been in multiple professions, from being a model to an actress, and CEO of a company. Moreover, she is also a Jewelry designer.

So, for sure, she has amassed a lot of money throughout her professional career. As per sources, Nicole has a net worth of $10 million.