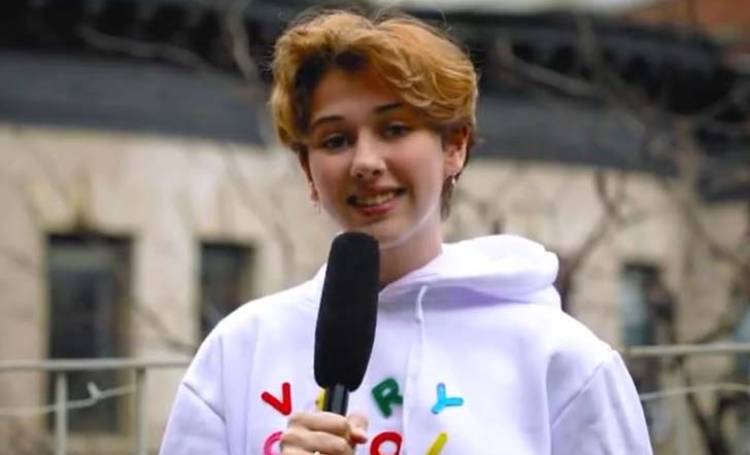 Caroline Grossman aka Caroline Konstnar is a Youtuber who is popular for making parodies and light-hearted jokes. Apart from being a social media personality, she is a singer, songwriter, dancer, and actress. While CornCast is her first series, ‘It’s Prom‘ is her first content that garnered a lot of attention and she rose to fame.

She has appeared on TV shows such as Blue Bloods, Broadwalk Empire, Louie, and The Detour. Furthermore, her songs; The Jellyfish Song, The Birthday Song, etc are available on Spotify too.

With all that impressive qualities, she certainly is a hotshot and will go a long way. In this article, you’ll get to explore Caroline Konstnar’s age, college, her Instagram, her passion for ballet, and whether she has ADHD. Also, did you know that she was a victim of antisemitism? So, without any further adieu, let’s start!

As of 2022, Caroline is 18 years old and is a bisexual. She was born in 2003 as Caroline Arielle Grossman to Seth and Liz Grossman in Florida, USA. Soon, she will be celebrating her 19th birthday on the 4th of August this year.

Likewise, although her last name is Grossman, Caroline prefers Konstnar as she finds it meaningful and matches her personality. Actually, Konstnar is a Swedish word for an artist and there couldn’t be a perfect word that could resemble her nature other than this.

As for her nationality, she is an American national who has a mixed heritage. Both of her parents belong to Jewish, Czech, and Swedish backgrounds. Though she was born in Florida, she was brought up in New Jersey along with her siblings and currently resides in New York.

Where did Caroline go to school?

Talking of Caroline’s educational details, she attended homeschool at Laurel Springs School. It is a WASC-accredited k-12 private online school. Moving on to her higher education, she enrolled in the School of Visual Arts and studied illustration. As per some sources, she is pursuing her degree in psychology.

Her mother, Liz Grossman is an executive director of a welfare organization that aims to achieve and promote equality by supporting people who are in dire need of acceptance and a feeling of inclusion. Its main motto is to put an end to the existing unfair treatment, bullying, and hatred towards the minority group who are subject to prejudices of the double standard people of the society. Similarly, Caroline’s mom has also performed ballet and passed on the same to her young one Caroline.

On the contrary, details regarding her dad aren’t available on the digital platform apart from the fact that he follows Judaism. Now, talking about her siblings, she has a brother and a sister both of whom are older than her. Her sister Talia has chromosome 18q-syndrome while her brother Joey has autism.

As mentioned above, Caroline Konstnar has inherited some of her mother’s traits and has an interest in Ballet. She has even won a gold medal in the scholars’ classical section in an International Ballet Competition held in South Africa in 2016. In addition, the Ballet enthusiast donated her winning prize to Zama Dance School in Cape Town, South Africa. Thanks to her generous nature, her contribution certainly helped the dance academy.

Interestingly, Caroline turns out to be gutsy as well. At the age of 14, she moved to her own apartment in New York and was living there all alone because the distance from her home to dance school was quite long. As her family was in New Jersey and her Ballet school was in New York it would be too hectic for her to travel every day. So, she decided to shift to New York. However, she wouldn’t be able to make it without her parent’s support as they paid her rent. Man, she is lucky!

Not only was she a trainee but a trainer too. Yep! Konstnar has trained Ballerina in 2 places; at Valentina Koslova Dance Conservatory in New York and at the School of American Ballet.

Why did Caroline Konstnar Delete Her Videos?

In 2020, Caroline deleted and privatized many of her videos on her Youtube channel Caroline Konstnar. She later explained that she felt embarrassed to watch her old content citing that she didn’t want her potential college to see it. Nonetheless, her fans differed from it and responded that despite how crapy and crazy she thinks it is, they still enjoyed all of her content and loved her humor and sarcasm which is just top-notch compared to the ones on TV.

Video: One Of Caroline’s Funny Video

Shortly after that, many of her fans started re-uploading her deleted stuff but Konstnar asked the people to abstain from it. Likewise, she deleted a video from her Advice From Series list in the November of the following year. She stated that she wasn’t satisfied with her work and promised to come up with a better one.

At present, she has 966k subscribers and is about to hit a million in near future.

Does Caroline Konstnar Have ADHD?

Oh no! No! She doesn’t have Attention-Deficit/ Hyperactivity Disorder (ADHD) but she did have a bipolar disorder. Although it may sound similar and even doctors do confuse bipolar with ADHD sometimes but there’s is a slight catch. While ADHD is more of a severe case and is a lifelong complication in neural development, bipolar disorder is episodic and just a mood disorder.

Coming back to her case again, Caroline was diagnosed with the disorder when she was 17 which is not so long ago. Due to her health issues, she took a break for a while and refrained from creating and uploading videos. Moreover, she was admitted to the hospital after a manic episode.

Nevertheless, she is healthy as a horse now and is completely stable physically and emotionally. Again, it was all possible due to the love and blessings of her family. As it was around the Covid-19 period, she returned back to her parents which worked as a catalyst in healing her. Along with that, she underwent a couple of medications and treatments as well.

Initially, Caroline began by posting her art pics and short skits on Instagram which eventually improved after a span of time. Soon, she observed that people were only interested and responded to her funny. So, she started only making funny videos and it was going pretty well in a flow.

But some people criticized her and she faced backlash for being Jewish. As per some sources, most of her content was flagged down and removed from Insta due to the Semites. I mean come on people! It has already been ages since the Holocaust era and here we are yet again bashing people, spreading hate!  Regardless of one’s race, religion, and sexuality, talent deserves appreciation and recognition whatsoever.

Being a social media sensation, the 18yr old is active on various social media be it Facebook, Instagram, or Youtube. Nonetheless, it’s unclear if she has a Twitter account though. Upon our research, google showed her Twitter account alongside other platforms but while landing on the page it seems to be an account of one of her fans as it is clearly named ‘not Caroline!’ and mentioned just a fan.

On the other hand, Caroline Konstnar’s username on Instagram is #caroline_konstnar where she has 313k followers. She is also active on Twitch and TikTok.

Does Caroline Konstnar have a Boyfriend? Who Is She Dating?

For the record, she is single at the moment. However, Schuyler Wijsen and Anthony Potero were her rumored boyfriends. While her alleged ex-boyfriend Schuyler is a ballet dancer, Anthony is her fellow Youtuber famous as Anthpo with whom she has collaborated in a couple of videos. Apparently, we can now see where all those gossip came from.

Nevertheless, Caroline is a witty lady and has dismissed all the hearsay with her humor and breezy personality. Moreover, she has even revealed on social platforms that she is bi and isn’t afraid nor ashamed of being one.

As of 2022, Caroline’s estimated net worth is $3 million. She has earned a huge portion of her fortune from her Youtube and acting career. Besides, she is also a ballerina & an illustrator. So, the young lady is proactive and has got her hands full on various stuff which is evident from her booming total assets.

Who Is Presley Elise? Inside Her Personal And Professional Life