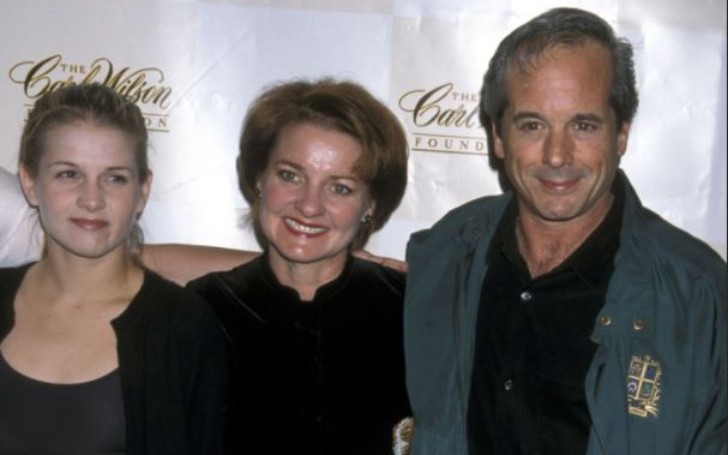 Haley Arnaz is known to the world as Desi Arnaz Jr.’s adopted daughter. The legendary actor legally became her father after marrying her mom, Amy Laura Arnaz. Since then Haley became a subject of curiosity for years and years to follow.

While her famous dad is a prolific actor, her mother was also a renowned dancer. What about herself? Is she an actress like her father or a dancer?

Today in this article, find out all that you need to know about Haley Arnaz’s life. Also, know what is she up to these days?

Haley Arnaz Early Life: Who is her biological father?

She was born on December 17th, 1976, in the United States. She is the only child between the late dancer and instructor Amy Arnaz nee’ Bargiel and her first husband Gary Frederick Charf-Wilkinson. Haley has Polish and English ancestry.

Haley was around 3-years-old when her parents divorced in 1979. Afterward, her mom started dating Desi Arnaz Jr. and after their marriage, he officially adopted Haley. The family of three later relocated to Boulder City, Nevada where Haley spent most of her childhood. She completed her formal education at a local high school in Boulder.

Upon finishing high school, she transitioned to dancing and thus has no further education.

Does Haley have any siblings?

She is the only biological child of her parents, however, from her adopted father Desi Jr.’s side she has one adoptive half-sister named Julia Arnaz. She is the daughter of Desi Jr. and his former partner Susan Callahan-Howe.

The former flames welcomed Julia when both of them were only 15-years-old. Because of this reason, Julia had to spend her former life outside the Arnaz family. Then after a paternity test in 1991 which proved  Julia was Desi Jr.’s daughter, the father-daughter bonded. As of now, Julia is living a blissful life with her husband Mario Anzalone. She once had to endure a painful moment in her life when her daughter Desiree S. Anzalone passed away in 2020 due to breast cancer.

Besides, back in the days, when Desi Jr. was dating actress Patty Duke, there were rumors that he fathered one son with her which was Sean Astin. Initially, Patty claimed that her husband, now former, Michael Tell was Sean’s father but later retracted from the statement. To this day, it is still not clear whether Sean is Desi’s son or not.

What is Haley Arnaz up to these days?

Being a star kid, Haley had all the opportunity to become a major star in showbiz. However, she took the same path as that of her mother, Amy, and became a professional ballet dancer.

From an early age, Haley was quite interested in dancing because of which her mom Amy enrolled her at the Dance Etc Inc. in Boulder City, Nevada. Growing up, she participated in numerous ballet events. What’s more, she danced in various ballets including ‘The Nutcracker’ of 2006. At the event, she danced as older Clara and the Princess in the Land of the Sweets.

Additionally, Haley also joined her parent’s Boulder City Ballet Co from which she was a part of many ballet events. As of now, she lives in Santa Clarita, California and we’re sure that if she is retired from ballet then she is definitely teaching ballet to kids.

Is Haley Arnaz married? Does she any children?

Despite her fame, she has chosen to remain behind closed doors. She only came to the media whenever her mom and dad were on the news. This is why there’s not much information about her life. Although she is active on Facebook, there’s no mention of her marital life.

Going by her social media, it seems she is yet to tie the knot yet. Similarly, she doesn’t have any children as well. Then again, all of this is purely based on surface information. Regardless, we sure hope her personal life is going well.

Desi Arnaz Jr. and Amy Arnaz exchanged vows on October 8, 1987, in an intimate wedding ceremony. There’s not much info on the ceremony, nevertheless, it was surely a lavish one. The only sad part was that the pair couldn’t receive Desi’s dad Desi Arnaz Sr.’s blessing as he had passed a year before in 1986.

Throughout their married life the couple made a number of public appearances together. Their relationship wasn’t like your regular deranged one that we generally see in showbiz. Both of them had their respective career to focus on and they supported each other to the fullest.

As a couple, they didn’t welcome any biological child but they were a proud parent of two kids, Julie and Haley.

Haley’s mother Amy passed away in 2015

The beginning of the year 2015 wasn’t great for the Arnaz family as they bid their goodbyes to Amy Arnaz. The Boulder City native passed away at the age of 63 on January 23rd, 2015, due to breast cancer. The retired ballet dancer was also diagnosed with a brain tumor which was diagnosed in January 2013.

The terrible news shook the whole industry and Boulder City. To pay tribute to ‘Miss Amy’ everyone from the city gathered at the Bicentennial Park and filled the air with pink balloons. The balloons had “See you in heaven Miss Amy” written on it.

From such a display of affection, one thing is for certain, Haley’s mother Amy was loved by everyone. It isn’t surprising to hear given that she touched so many lives during her lifetime.

Haley Arnaz’s net worth: Did she inherited her adoptive grandparents’ wealth?

She was only an infant when Desi Arnaz Jr. adopted her. Since then, her lifestyle changed dramatically. After all, her dad was one of the wealthiest actors around. When his father died, all of his money was to be equally divided among his kids.

As of now, Desi Arnaz Jr. has a net worth of $40 million. This clearly implies Haley also enjoys a lavish lifestyle. Having said that, her precise net worth is around $2 million.