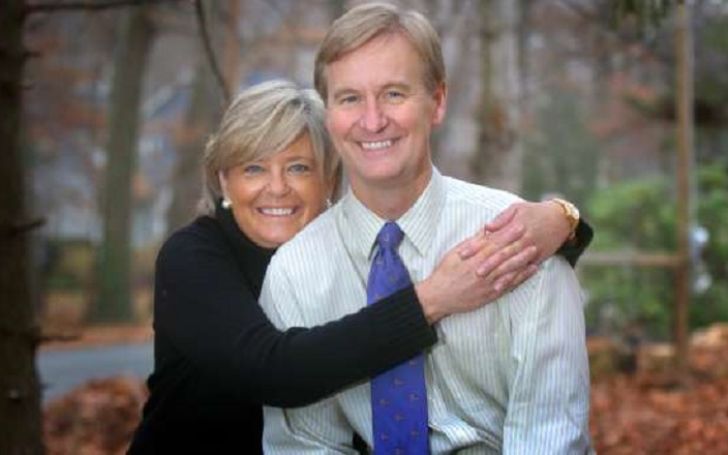 Kathy Gerrity (ala Kathy Gerrity Doocy) is a former model who previously ran a sports show on ESPN. Besides, Kathy is better known as the wife of Fox and Friends‘ anchor, Steve Doocy. It’s been over three decades that the pair have been married and their relationship is still sailing smoothly.

Besides, Kathy and her TV host husband are blessed with three children, including a son Peter Doocy, a Fox News White House correspondent.

In this article, we will try to find out many more unexplored facts regarding Gerrity. Let’s take a closer look!

Gerrity’s age is 64. She was born on 24th May 1956, in the United States of America. She is an American by nationality and is of Caucasian ethnicity.

Even though she has frequently been in the media, most of her early life details still remain behind the curtains. While talking about Kathy’s husband’s early life details, Steve is the son of JoAnne and James Edward Doocy, a traveling salesman.

Gerrity and Doocy first came across when they both were working at WRC-TV in Washington D.C. Steve began working with NBC’s television station after a B.A. in Journalism from the University of Kansas. He served as a features reporter for the network before becoming the host of House Party with Steve Doocy, NBC’s nationally syndicated program.

Talking more about Kathy’s professional endeavors, as per Washington Post, she also worked as a model for some time. Furthermore, Gerrity ran a sports show on ESPN for some time.

How did Their Love Story Began?

Shortly after their first encounter, Steve and Kathy started dating and sharing their feelings with each other. One day, the ex-model even invited her Steve for champagne. Gradually, their courtship blossomed into an undeniable love and they eventually decided to take their relationship to the next level in 1986.

The couple dated for a few years before Steve proposed to his girlfriend Kathy on Valentine’s Day 1986. The loving pair didn’t wait for too long to tie the knot and they exchanged their vows in late June that year. They are together ever since, supporting each other through their thick and thin.

Back in 2007, the conservative television host published a book, ‘The Mr. And Mrs,’ dedicated to his wife. At the time, Doocy told Christian Broadcast Network,

“Ultimately I wrote this book because I love my wife.”

Interestingly, before writing the book, Kathy and Steve both joined a dating service to prove if they were a cent-percent-loving couple.

Furthermore, Steve once created a “4-H Club” formula to become a loyal and perfect husband. The four H includes the words “honesty, handling, humor, and handcuffs.”

All these abovementioned gestures hint towards their successful love story which they have been sharing since the 1980s.

How Many Children Does Kathy Gerrity Have?

Gerrity is a mother to three grown children. She gave birth to her first child, a son Peter Doocy on July 21, 1987, in Washington, D.C. with her husband Steve. A couple of years after Peter’s birth, the enduring couple welcomed their second child, Mary G Doocy. Moreover, their third child and second daughter, Sally G Doocy was born in November 1992.

Divorce Rumors – Are Kathy Gerrity and Steve Doocy Getting Divorced?

Several years back, there were rumors of Steve and Kathy getting a divorce. But, the speculation later turned out to be false. As of now, Kathy and Steve are enjoying a wonderful married life that has spanned more than thirty-four years.

Kathy Gerrity Wrote a Cookbook With Her Husband

Back in 2020, Kathy published the Happy in a Hurry Cookbook along with her husband. The book was a massive success, which hit the number one position on the New York Times Best Seller List. Furthermore, the publication also became one of America’s top cookbooks of the year.

Steve once said that the most cherished moment of his whole family is when they sit around the dinner table and enjoy a tasty meal together. The veteran media personality also said this is actually how the idea for their cookbook came out.

What happened to Steve Doocy’s wife Kathy Gerrity? Was Diagnosed with Ocular Melanoma

Back in the mid-2010s, Kathy was diagnosed with ocular melanoma. She didn’t know anything about cancer until she visited the eye doctor to buy a new pair of shades before her trip to Florida. Kathy and her husband Steve visited the doctor in New Jersey who later found out a freckle on the back of Kathy’s eye.

The specialist then told the duo to go to Wills Eye Hospital in Philadelphia to do more tests. The tests resulted in Kathy’s diagnosis of eye cancer. After the diagnosis, the doctor told Kathy, “I’m going to save your life.” She later did radioactive plaque therapy for five consecutive days. Now, the condition of Kathy’s eye is quite clear.

Net Worth of Kathy Gerrity

Gerrity’s fortune is $200,000 as of 2022. She currently resides in her house located in Wyckoff, NJ. Besides, her hubby has an estimated net worth of $11 million. The TV host is reportedly paid a salary of $4 million.