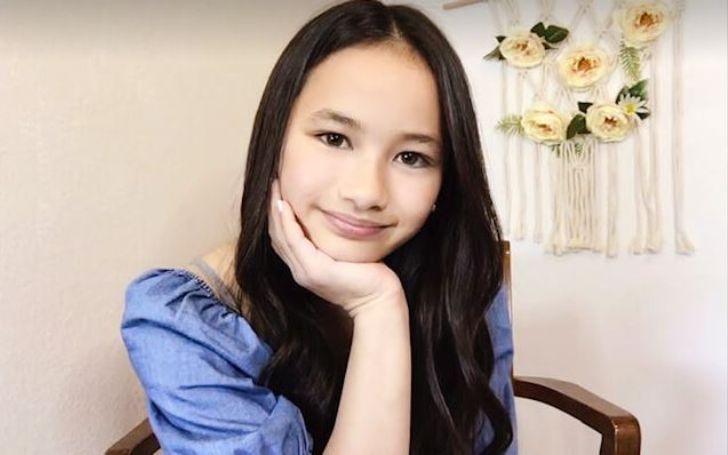 Kaylee Hottle is an actress known for playing Jia in the 2021 sci/fi action movie ‘Godzilla vs. Kong.’ Hottle is part of the amazing ensemble cast of Godzilla vs. Kong playing a young girl who can communicate with Kong through sign language.

She initially started with a commercial with her Korean American mother and that ultimately led to landing her a part in the Legendary Pictures and Warner Bros. blockbuster monster saga. With her debut in director, Adam Wingard’s film, Kaylee got the platform to exhibit her acting talent along with big names in the industry such as Rebecca Hall, Alexander Skarsgård, Millie Bobby Brown, and Brian Tyree Henry.

Ever since Hottle’s performance as a deaf Iwi native girl in the film, people have shown increasing interest to know more about her and her back story. So here is everything detailing so about this young star on the rise.

Kaylee Hottle Is From Georgia

The American Nationale, Hottle is really deaf and comes from an all-Deaf family, spanning four generations of Deaf relatives on her father’s side.

Both of her parents Ketsi Carlson and Joshua Hottle as well as her older sister are deaf. According to reports, the 10 years old Hottle also has three younger siblings all of whom have normal hearings.

Hottle currently studies at the Texas School for the Deaf and she is natively fluent in American Sign Language.

Hottle’s mother, Ketsi Carlson, was reportedly born in Korea and adopted by a family that moved to Superior, Wisconsin. Kaylee’s father, on the other hand, was born in Minnesota.

When Hottle’s father was young, his family moved a lot, including places like Oklahoma, Kansas, and Colorado. Kaylee’s parents, Ketsi and Joshua both attended a deaf school in Minnesota.

The couple, however, is no longer together. Hottle’s mother, Kersi is now in a relationship with Ryan Kelly. Both of her parents helped her with the script translation throughout the filming of Godzilla vs Kong.

The Georgia-native Kaylee began her career in commercials; she was around eight or nine. Hottle first acted for the camera in 2016 in the advertisements for the Glide application public service announcement.

A year later, she would star in a Mother’s Day commercial for Convo Relay. Prior to Godzilla vs. Kong, Kaylee also appeared in 10 Deaf Children: One Powerful Message, a call to action to join the Deaf community in the ongoing fight for equality.

Kaylee kicked off his big-screen career in the 2021 MonsterVerse film, Godzilla vs. Kong.

While the film had two gigantic species as its main leads, the actress, Hottle also held her own amongst film’s major stars like Alexander Skarsgard and Rebecca Hall. Hottle’s character in the film, Jia is an orphaned girl who has a strong bond with Kong.

Hottle initially had no interest in becoming an actor, but hanging around with a cast around her, she realized it was fun. Hottle admits before Kong, big monster action films weren’t exactly her cup of tea; she preferred to watch Disney films and TV shows.

The casting teams of Godzilla vs Kong didn’t find Kaylee through ‘traditional casting channels.’ Producer Alex Garcia in April 2021 revealed it wasn’t easy to find Hottle, but when they did, they knew she was the perfect Jia.

“Finding the right girl to play Jia was an incredible challenge,”

Garcia added her team had to look outside of the traditional casting channels to find Kaylee.

Alex says she and her group were very fortunate to cast Hottle who had never been in a film before. It was her casting director, Sarah Halley Finn who through a network of other casting directors and theaters was able to locate her. Garcia claims the moment she met Kaylee the film’s team knew she was the right girl for the part.

Kaylee Hottle Had Some Difficulties Reading Lines From Godzilla Vs Kong

Although Kaylee faced minor challenges, the film’s team was sensitive to her needs and made efforts to make her as easy as possible. Hottle admits there were times that she misunderstood the script for the spoken parts due to its translation into ASL.

The pre-adolescent actress, however, appreciated the cast and some of the workers on the set learned ASL, making it easy for her to communicate.

During her time in Kong Vs Godzilla, Hottle impressed almost all of her adult co-stars. As such one of the film’s leads, Alexander Skarsgard told Junkee he learned American Sign Language so he could communicate with Kaylee on set when they weren’t filming.

The actor admitted to him it was amazing how quickly Kaylee adapted to everything that was in her first film.

“It’s fascinating how comfortable she is in front of the camera and how quickly she takes notes from the director Adam [Wingard]. He’ll explain something and she’ll be like ‘got it, got it’ then she’ll just do it and everyone’s like ‘the f**k … how did she?’

Skarsgard remarked Hottle’s professionalism was ‘just incredible.’ He also mentioned how there was so much going on on her face, her expression and for him, the subtleties of that were fascinating to watch.

During an interview with the Daily Moth, Kaylee said teaching the cast of Kong V Godzilla how to sign was quite a challenge. She said since her co-stars had never interacted with a deaf person before, she had to explain to them how to sign and use facial expressions.

Hottle states that were the hard part, but when they picked up on it, it was fine. The former commercial actress though said she didn’t really have challenges as her co-stars were very accommodating.

Talking about the Utah-born actress portraying the character with hearing disabilities, Hottle said,

“Because deaf people are aware of their own language and they’re more familiar with the culture.”

The Korean-American actress noted Bailee Madison (Bridge to Terabithia) is also an actress she adores.

Hottle is also often advocating for the deaf community. Sometimes she also serves as an ASL activist.

Hottle’s appearances in commercials and movies have helped her to spread a message about the importance of ASL. Kaylee additionally appreciates the 2022 Oscar best picture winner, “CODA,” a film about the only hearing child in a deaf family.

She believes Coda winning the Academy was a huge step and the film has been ‘awesome’ in spreading the word and representing the deafness in the movies.

How Much Did Hottle Receive In Godzilla Vs Kong?

Considering her fresh start, it might be a while before people get to know about Hottle’s paycheck particulars including the figures with respect to her Gozilla Vs Kong or even her net worth.

On a slightly different note, however, Kaylee’s other famous co-star, the British actress, Millie Bobby Brown made headlines when she managed to swipe over $2million for starring in the 2021 demon blockbuster. Some sources claim the amount was as high as $5million in light of the film’s box office success.

Is Kaylee Hottle On Social Media?

Hottle officially launched her Instagram account in April 2021. Her first ever post include a short video where she tells her fans that ‘this is my official Instagram page, I wanted to thank you all for your support and love!’

So far she has only a handful of posts. Kaylee’s Insta feeds mostly include her involvement with the Deaf Community as an activist. From the looks of her socials, Hottle was also at the 2021 summer Anime Matsuri, the annual Japanese culture convention in Houston Texas.