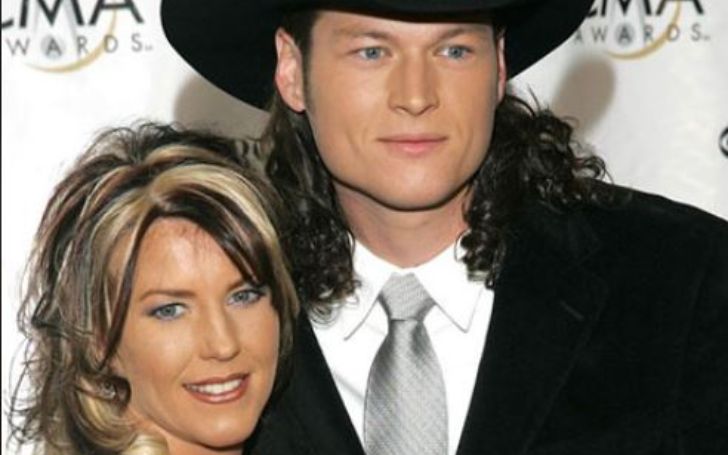 Kaynette Williams is a Kansas-based elementary math teacher who is better known as the first wife of a country music singer and the Voice USA judge, Blake Shelton.

Shelton’s story with his other ex-wife and Miranda Lambert is certainly among the memory of the majority of music lovers. It, however, wasn’t the first time the Gold and Platinum-certified singer was unlucky in marriage. That, either in the known or the unknown, belongs to Kaynette.

One could say Williams stayed by the country crooner’s side through all the days of his career. But, what is Kaynette Williams up to these days now? Did she remarry after Blake’s Saga? Is she living an all-normal life or has become famous in her own right? Know all these in the piece down below.

Much Like Her Ex-Husband, Kaynette Williams Is Also An Oklahoman

Her current Facebook, however, says she is from Jesse, Oklahoma. Some argue Kaynette, who is a Pisces, has another full name, Kaynette Francis Gern. As a matter of fact, over the years, she has gone by multiple names — Kaynette Gern, Kaynette Shelton, and Kaynette Scheck.

Also, when young, the daughter of Kay Kast-Gern and Fred Edgar Gern Sr, a US veteran, reportedly tried for her own career in music, having vocal talent from childhood.

She also has a sister, Orpha Gern-Reese, and a brother.

Williams and Shelton met for the first time in their hometown of Ada, Oklahoma. The two had known each other since they were mid teenagers. Shelton and Williams, however,  didn’t start dating each other until the latter was 21. Thereafter, they were boyfriend and girlfriend for several years.

Kaynette was also his road manager when Shelton was just starting out his country music career in Nashville.

“I knew Kaynette was the one,” Shelton confessed to Country Weekly in Dec 2003 talking about his love for his first blonde wife.

“Just because I can’t explain it I can’t say it’s because we get along or because of the way she looks. It’s just something I feel – you know what I mean? It’s nothing more than just knowing you’re right,”

Shelton and Kaynette had a rather uncrowded wedding with only a handful of people. But before that, the former presented his marriage proposal to Williams in a quite unconventional yet very country fashion way. The twenty-time Voice panelist said he did it one early morning in the month of December after he came home from hunting.

Shelton further revealed after she had yes, they ended up going back to the hunting spending and for the rest of the day, they partied with some friends. Williams and Shelton married each other in Gatlinburg, Tennessee on November 17, 2003.

“Our whole lives are always in the public eye, plus we live on a bus with 10 other people. There are just always people around. We never have time for us, so it seemed like the perfect way to do this.”

On their big day, Blake sang Conway Twitty’s Julia to his bride.

For the first two years of their marriage, Shelton toured and performed regularly, with Williams still serving as his road manager.

By the third year of their marriage, however, rifts started to appear and they eventually parted ways in February 2006, the official divorce date. In their divorce papers, Williams claimed Shelton committed “inappropriate marital conduct.”

Years later, in May 2014, Kaynette, also attempted to sell off her size 6 Demetrios wedding gown at a starting price of $700, through a friend’s eBay account. Allegedly, however, the item received no bidding. She went on to sell the dress nonetheless.

Shelton, on the other hand, admitted the pain of his first divorce was similar to losing his older brother Richie in a car accident. The nine-time Grammy nominee called the divorce “a tough, tough call to make.”

Shelton also admitted he wasn’t ready to be a husband when he married Kaynette. His separation from Williams additionally inspired much of his 2007 album, Pure BS including his highest-charting song, Don’t Make Me.

Blake admitted he was making this record completely right through the divorce (with Kaynette).

“I was dumping all those emotions I was going through and all that pain into this album,”

Why Did Kaynette And Blake Split?

Apparently, one of the main reasons behind Williams and the Oklahoma-born country singer relationship fallout was the latter’s alleged infidelity with fellow country star Miranda Lambert.

In an interview, he said about the then bizarre incident of falling for a lady when he was still married to his former road manager.

Shelton revealed he lost his heart to Lambert while they were singing a duet during the CMT 100 Greatest Duets special in September 2005.

“I’ve never had that kind of experience with anybody. I was a married guy, you know? Looking back on that, I was falling in love with her, right there on stage,”

The singer with 28 number one confessed.

Did Kaynette Williams Remarry After The Divorce From Shelton?

After splitting from the Doin’ What She Likes‘ writer/singer, Kaynette left Nashville to return to Oklahoma.

However, her ex-husband, Shelton, and his then-wife, Lambert would also happen to move in the nearby local. With the National Enquirer in 2011, she once said after the splitting up from the songwriter, she moved from Tennessee back to Oklahoma.

She added Blake and Miranda would also move back there to a neighboring town, after which Oklahoma wasn’t big enough. Williams, henceforth, left Oklahoma and then headed to Kansas. After moving to Kansas, Williams settled in Great Bend and started working as a teacher, a math facilitator.

In fact, in late Jan 2020, she received the Presidential Award Nominations (as a 4th-grade teacher) in the area of Mathematics for South Barber USD 255.

She is now also the wife of rodeo champion, and the world record holder for steer roping, Cody Joe Scheck. Reports of the former Oklahoma resident dating Scheck started to emerge in 2013.

In Jan 2022, on the occasion of National Spouse Day, Kaynette, who is now 48-year-old, revealed almost all about how she came to Ms. Scheck. They apparently had their first date at Moms at Seward, Kansas in 2011.

In the post, Williams also revealed how her husband is a better driver, spendthrift, a better morning person, the one who falls asleep faster, among others. The Scheck couple currently resides in Kiowa, Kansas.

Shelton Married Twice After Breaking Up With Kaynette

After Williams, Shelton, the singer who has a net worth of over $100million, married fellow singer, Miranda Lambert on May 14, 2011. They, though, would also end their union in 2015.

Blake’s current wife is Gwen Stefani, the Tragic Kingdom singer. They met on The Voice TV show & dated for six years before tying the knot on July 3, 2021, on their ranch in Oklahoma.