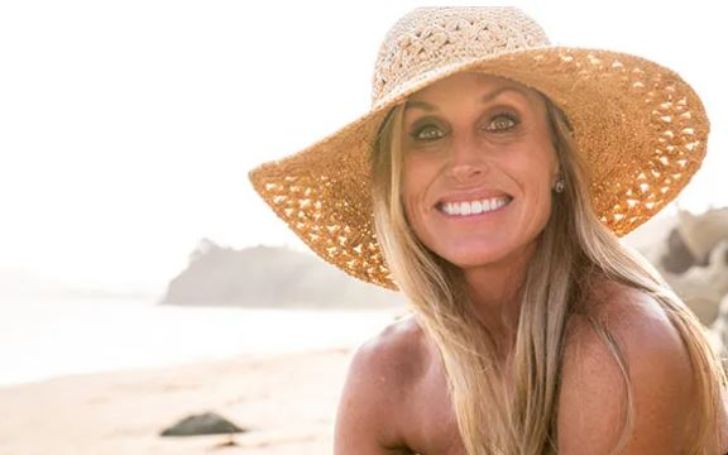 Kristin Richard the ex-wife of Lance Armstrong and also a mother, a writer, and a runner who has written more than half a dozen books. Some of them are Heart of My Heart: 365 Reflections on the Magnitude and Meaning of Motherhood, Work in Progress: An Unfinished Woman’s Guide to Grace, and Mile Markers: The 26.2 Most Important Reasons Why Women Run, among others.

Her freelance works have appeared in publications such as US Magazine, Huffington Post, Glamour Magazine, The Opera Magazine, Austin American Statesman, and others.

Kristin though is better known as the ex-wife of Lance Armstrong, a former professional road racing cyclist. Armstrong was once famous as a sports icon for winning the Tour de France seven consecutive times from 1999 to 2005. He, though, lost it all following a positive doping scandal results.

Armstrong’s ex-spouse, Richard is also a contributing editor for Runner’s World magazine. Her journals often give a load of insight into her journey and identity as an athlete, and, specifically, as a runner. She is admired for reaching her audience with a unique, honest, and raw voice through her writing.

Learn more about her through the headings below; divulge the details of her early life, career, her marital span with Lance Armstrong, her current doings, and more.

Kristin Richard Birth Details; She Grew Up A Devout Christian

The first wife of Lance Armstrong, Kristin Richard was born in Aug 1971. She presumably is a native of Austin Texas. Richard grew up as a devout Catholic but stopped going to church once becoming the wife of Armstrong. She was also voted the Most Likely to Succeed and Best Hair in her small Minnesota High School.

The writer graduated from college with honors and did have a decent career run going until the fall of her marriage with Lance. Kristin also has a master’s degree in counseling from St. Edward’s University in Austin.

Mrs. Armstrong had bought her first house at age 24.

Where Did Kristin Richard And Ex-Husband Lance Armstrong Meet Each Other?

The former couple Kristin and Lance met at a press conference in early 1997. Kristin at the time was working for an advertising and public relations firm in Austin, Texas.

The book author once revealed to the Christian Broadcasting Network (CBN) that she met Armstrong during the time when the world-renowned cyclist was fighting testicular cancer. He had just finished undergoing chemotherapy.

Richard was planning for his foundation’s first cancer fund-raiser at the very press conference. Just one year later, Lance and Kristin married in Santa Barbara, California.

Lance had asked the question just months after meeting Kristin. After the marriage, Kristin gave up her employment in public relations, rented her house, sold her Miata, and moved to France to support her husband’s cycling career.

Following his marriage with Richard, not only did Lance overcome cancer but he also went on to consecutively win the Tour de France five times. In the meantime, Richard and Armstrong also became parents to a son and twin daughters, Luke and the twins, Grace, and Isabelle.

After having kids, Kristin became a stay-at-home mom and raised their three young children in the French Riviera However, after five years of marriage, by the year 2003, Lance and Kristin had decided to end their courtship.

The parents of three, though, reunited briefly, in time for the children to see the all-rounder rider achieve his fifth victory in the Tour de France. But when Kristin brought the children home that September, she and Lance finally separated for good.

On the other hand, her daughters Isabelle Armstrong and Grace Armstrong, born on 21 November 2001, have been students of Texas Christian University since 2020.

Why Did Kristin And Lance Divorce?

The apparent reason for Kristin and Lance’s divorce was that their union had left the former feeling “smothered,” and turned her from an opinionated career person into a “yes” woman.

This Richard confessed on The Oprah Winfrey Show in May 2006.

“It wasn’t Lance saying, ‘You should be like this’ or ‘Do this.’ It wasn’t him making a mandate and me being a mouse. It was me trying to emulate whatever I thought would be the perfect wife or the perfect mother,” said Richard, promoting an article she’s written for the April Glamour magazine titled “What I Wish I Had Known About Marriage,”

said the Heart Of Heart writer explaining the fallout of her and Armstrong’s separation.

The Divorce With Lance Left Kristin Broken; How Did She Recover?

Kristin and Armstrong’s divorce left the former admittedly weak, confused and disillusioned. She later divulged to CBN that it was her Catholic faith that carried her and enabled her to get through the divorce.

“Circumstances in life often take us places that we never intended to go. We visit some places of beauty, others of pain and desolation. I never imagined that divorce would be part of my life history or my family’s legacy.”

Kristin further eloquently stated that it was necessary for Lance and her to go forward honoring each other because that was the way that they could still show their children that love “is lasting and unconditional.” Kristin added she turned to God after her marriage ended and felt her faith become strong with the help of the ordeal.

Kristin Richard As A Runner

Running has been a huge part of her life. Kristin started sprinting after the birth of her twins.

She had run before but not on a regular basis. Her one-time longest run was just seven miles. It was after her divorce that Kristin’s friends proposed the idea of entering a marathon.

By November 2004, Kristin had run two marathons in one year. Her second run was to raise money for Fertile Hope, an organization that supports cancer patients struggling with infertility.

Kristin; The Writer And Author

Richard’s stint as a professional writer began after she had divorced the father of her children; the mother of three remained a stay-at-home mom until 2004 when she took a job as a writer for Runner’s World. She’s written several columns and features for the magazine over the years.

Richard was writing for the ‘Mile Markers’ column for runnersworld.com up until Sep 2017. She often wrote about a lot of things for Runner’s World. That includes writing, running, being a mom to her three kids, and getting her master’s degree in counseling at St. Edward’s University in Austin.

Since Kristin’s first article appeared in Runner’s World in 2004, she has penned plenty of articles — in addition to six books, including one about her divorce.

The book is titled Happily Ever After – Walking with Peace and Courage Through a Year of Divorce which is also a thank-you note to God. Following that, Kristin wrote another book for runners called Mile Markers: The 26.2 Most Important Reasons Why Women Run. In it, she focuses on how the sport is a microcosm of momentous life changes.

In 2016, the Runner’s World’s then Editor-in-Chief David Willey revealed in the podcast that Armstrong’s ex had been writing about running almost as long as she’s actually been running.

During her writing, Kristin was also busy raising three teenagers, training for a marathon, and going to school to obtain her Master’s degree in counseling at St. Edward’s University in her town of Austin, Texas.

She Now Writes For Tribeza And Is A Licensed Therapist

She is currently also an LPC associate, a professional counselor under the supervision of doctor Sunny Lansdale, a psychotherapist in Dripping Springs, Texas.

In addition to writing and running, Kristin also specializes in aiding clients of The Timothy Center, an organization that provides assistance and counseling for children and adults.

Through the organization, she also attends to those seeking help with “parenting, single parenting, co-parenting, and parent-child relationships.”

Also before meeting her ex-husband Lance Armstrong, Kristin was working in an advertising and public relations firm. She at the time used to work as a manager and account executive.

Did Kristin Richard Remarry After Her Divorce From Lance?

When reported in May 2015, Kristin was admittingly single. The Mile Markers writer herself revealed in an article for The Huffington Post that she was “43 and single.”

At that time, she said it was hard for her to picture being in her 40s and going on dates.

Further explaining the reason, the mother of three said,

“I joke with my friends that it’s not freaking funny to be dating, perhaps seen naked for the first time, precisely when the body is starting to shift and melt.”

She at the time stated for her being middle-aged and single was rather awkward.

As for the present, it is quite intangible what the relationship status of Armstrong’s former wife is. It is mostly because it’s been a while since she has come up with new writings exclusively about her life. Adding to the mystery is her absence from social media handles; the blonde writer for the time being is quite inactive on platforms like Facebook, Instagram, Twitter, and others.

Nonetheless in Oct 2017, writing for Tribeza, Richard mentioned she and her then-boyfriend had just taken a break from their two-and-a-half-year-long relationship. The blonde writer though has never mentioned more about him. Also unknown is if they are back together or if Kristin is still on her own.

On the other hand, her ex, Armstrong is currently in a relationship with a yoga instructor, Anna Hansen with whom he has a son and a daughter. Prior to that, Lance was also engaged to Grammy-winning singer Sheryl Crow.

What Is Kristin Richard’s Net Worth?

On one hand, Richard’s former husband, Armstrong has had a noteworthy run as a millionaire; he was once estimated to have a net worth of over $125 million but lost a huge part of it owing to his doping scandal. Richard’s former spouse nonetheless managed to retain almost half of the amount through his investment in a multibillion-dollar company, Uber.

Though, on the other hand, things get hazy when it comes to Armstrong’s ex-wife, Kristin Richard’s likewise pieces of what’s what. She in any case is reported to be a millionaire in that she has had quite a reputable writing career. Though the cause that may have helped significantly in cementing her status as a seven-figure woman is the $14 million divorce settlement that she received from her former partner.