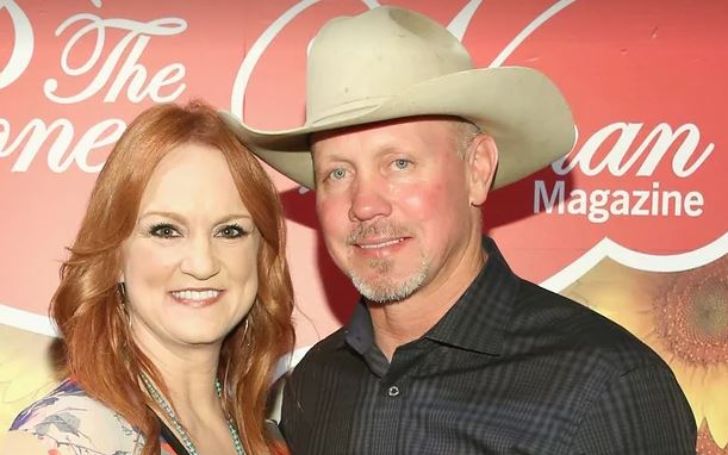 Ladd Drummond, a fourth-generation rancher, is the co-owner of ‘Drummond Land and Cattle Company,’ one of the largest estates in the state with his brother and father, in Osage County, Oklahoma. He is also known as the husband of Ree Drummond, a bestselling author, cooking show host, and photographer.

Drummond’s longtime partner, Ree is popular for Pioneer Woman, a popular blog for which she writes about her life on the ranch. She likewise is recognized for being the host of the Food Network show, The Pioneer Woman. Ladd’s partner, Ree through her blog has also penned several books, is a runner of a Food Network series, and has also launched a line of decent businesses in Pawhuska, Oklahoma, downtown.

While watching Ree’s show, The Pioneer Woman, fans also often get to see her ranch life whose quintessential character is her husband, Ladd Drummond. He is one busy guy who spends a good amount of his day directing and gathering cattle. Despite working at the ranch for his all life, things have gone a little chaotic for Drummond. As a matter of fact, Ladd apparently has more to tell other than his ranch life and cattle herding skills.

Scroll through to find out all about Ree’s husband, Ladd; on what makes him often the subject of interest among the food blogger’s fans. In addition, peek through his lineage, parents, his relationship with Ree, their children, and even his financial stature.

Aforesaid, the now 53 years old Ladd Drummond has been a fourth-generation cattle rancher. He is of Scottish-American ranchman descent.

Ladd’s great-great-grandfather, Ronald Thacker Drummond hailed from Scotland and upon immigrating to the US became a prominent businessman of his time. His major investments, however, were in South Africa in regard to diamonds.

Ladd Drummond Has Been A Ranchman Since Boyhood

Since he was a boy, Ladd has been working at the ranch; he had become skilled in manual labor, operating machines, and driving trucks from his childhood.

Ladd now is one of the heirs of the estate, Drummond Land and Cattle Co which was founded by one of his family patriarchs, Fred Drummond in the late 1800s.

Fred was also the husband of Kansas native Addie Genter with whom he had started Drummond Land & Cattle Co. The late couple had three sons all of whom later went on to become successful cattle ranchers.

It though is unclear if Fred was Ladd’s grandfather or the greats. The current partners of the Drummond Land and Cattle Company are Ladd, his father, and his brother, Tim while the cattleman’s cousin, Thatcher Drummond is the property’s associate.

The Pawhuska, Oklahoma-based Ladd Drummond, who celebrates his birthday on January 22nd was born in 1969, in Nebraska. There he attended Pawhuska High School.

Ladd Lost One Of His Brother In A Car Accident

One of Ladd’s brothers, Todd died in a car accident when he was 18; it was in the summer before he left for college. The late brother of Ladd at the time of his accident was working on a family ranch in Texas.

Ladd apparently is one of the three sons of his parents, Chuck Drummond and Nan Olsen. He is the middle of his late elder brother, Todd, and his younger sibling, Tim. The American ranchman of Scottish descent grew up with his two brothers in Pawhuska, Oklahoma.

When Ree met Ladd, the latter was already a working cattle rancher. The blogger/author and Ladd met each other in a bar in the mid-1990s. Ree was on a night out with her girlfriends.

Ree at the time had just returned to her hometown, Bartlesville Oklahoma having finished college in LA. The now reality star then was planning to move to Chicago to study law but she later changed her plan and instead decided to stay with Ladd.

Mr. and Mrs. Drummond married each other in September 1996. After the wedding, the couple went to Australia. Upon returning to the states, the couple resided on a remote working cattle ranch about eight miles west of Pawhuska, Oklahoma. It was also two hours from Oklahoma City.

Ladd And His Spouse Ree Are Parents To Five Children

The Marlboro Man, Ladd Drummond, and his wife Ree, together, have five children. They had their first, a daughter, Alex in 1997, and their second, Paige in 1999.

The couple welcomed their third child and their first son, Bryce in 2002 and their other son, Todd in 2004. The Drummond couple homeschooled all of their children from kindergarten through high school.

In addition to their four children, Ree and Ladd are also parents to their foster son, Jamar who they welcomed into their family in 2019. All of Ladd’s children including himself and his wife, love fantasy football.

The family, in 2011, also appeared in The Pioneer Woman, their matriarch, Ree Drummond starrer reality series. In fact, over the course of the show’s 300 episodes, Ladd has made it to 88 plus episodes. The show first aired in 2011 on the Food Network and as of 2022 has over 400 and counting episodes.

Ladd Is Much Richer That His Celebrity Wife; What Is His Net Worth?

The cattle rancher and the husband of popular blogger, Ladd Drummond is famously rich with estimates purporting his net worth lying easily above the $200 million mark. He apparently is even richer than his more famous wife, who herself had a wealth totaling about $50 million. Most of Ladd’s wealth is thanks to his inheritance from his ancestors; the often referred to as a proud Sun Devil scored quite a lot of properties from his lineage.

Further, he is also a business partner with his real-life partner, Ree Drummond. Included in his avenues of income is a restaurant and retail store in a 100-year-old downtown Pawhuska building, a bed, and breakfast, by the name, The Boarding House, P Town Pizza, and an ice cream parlor, Charlie’s Sweet Shop.

In addition to the family businesses, there’s also money coming in for Ladd from the US government. Apparently, America pays the Drummond estate some $2 million per year to help them keep wild horses and burros on their property so they can protect them. As per the data, the Bureau of Land Management has paid Drummond Land and Cattle Co. over $25 million starting from the year 2006.

Back in March 2021, Ree’s husband, Ladd suffered a horrific accident that involved him crashing his large vehicle whilst he was responding to fires that had burnt more than 200 acres surrounding the Drummond family farm in Pawhuska, Oklahoma.

As a consequence of the accident, the Sun Devils fan went on to suffer a broken neck; in two places. Ladd had to go through surgery to stabilize his neck fractures in addition to wearing a neck brace for several weeks.