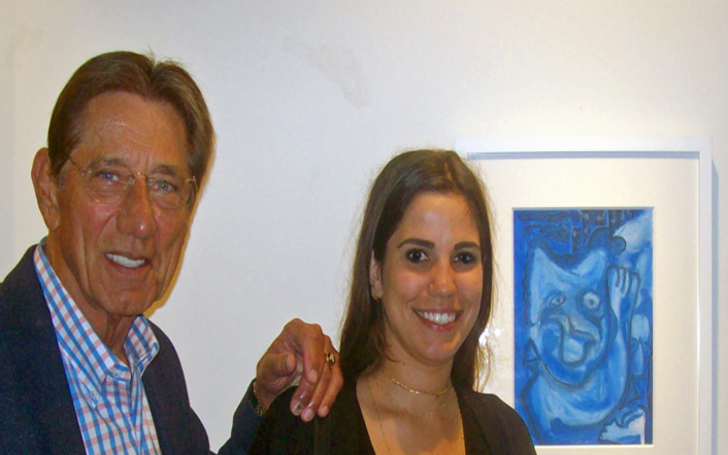 Olivia Namath is one of two daughters of former New York Jets quarterback Joe Namath. She was born from his marriage to his ex-wife, Deborah “Tatiana” Mays. While Joe may have had a satisfactory life on the football pitch, his personal life wasn’t all that moon and beaches.

From struggling to cope with his teenage daughters to divorcing his wife of sixteen years, one could say his personal life had a fair share of ups and downs. But we are especially talking about his youngest daughter, Olivia who has had her own set of troubles while growing up.

Know all about her past fiascos all the way up to her current affairs as a mother and a wife down in the content below.

Olivia Rose Namath was born on December 11th, 1990. She got her name from her grandmother, Rose Namath.

Her paternal grandparents, Rose (née Juhász) and János “John” Andrew Namath, a steelworker, were Catholic and of Hungarian descent. Olivia’s Hungarian-born great grandfather, András “Andrew” Németh, known as “A.J.” to her family, came to Ellis Island on the steamer Pannonia in 1911 and worked in the coal and steel industries of the greater Pittsburgh area.

Olivia’s maternal ancestors, the Mays, was one of the affluent families in Ligonier, Pennsylvania.

Olivia’s parents Joe and Deborah Lynne Mays married on November 7th, 1984. The low-key ceremony was held at one of Deborah’s friend’s backyard in Coral Ridge Country Club in Fort Lauderdale, Florida. The poolside wedding had dozens of guests.

Olivia Namath’s father Joe met his now ex-wife for the first time in the early 80s. At the time, the veteran quarterback had decided to join a voice coaching class taken by the famous vocal coach, Arthur Joseph. Coincidentally, Mays was also taking classes at the same institute.

While Joe was just starting his class with Arthur, Mays was already at the end of her lessons. Arthur and Mays had known each other for a little while and she even told him about her marriage plans. In Joe Namath’s biography, Arthur said it was a vision of hers. She had always wanted to have a family with a football player.

They eventually met and by the next day, they had started dating.

After about a year into their marriage, Joe and Mays welcomed their first child, a daughter, Jessica Namath. Several years after her birth, Joe had her second daughter, Olivia Namath on December 11th, 1990.

After raising two daughters, Joe and Mays’ relationship started to have a rift. Deborah would eventually move away from Joe’s house in September of 1998 and started living in California. There fell in love with the surgeon Brian Novack. Apparently, Mays cited she was getting bored with Olivia’s father and that she’d developed feelings for Novack.

Olivia’s biological parents officially separated in 2000 and her father won the sole custody of her and her sister. The father of two now resides at his 1.5 acres Tequesta, Florida house. Joe’s house has four bedrooms, three bathrooms alongside a boat dock, and a swimming pool. In addition, the Tequesta locality offers a private 18 hole Golf Course.

Olivia’s Has An Older Sister

She has only one sibling, an older sister, Jessica who is about four years older than her. Jessica is an alum of the University of Alabama, the same college her father attended.

Olivia’s elder sister married a guy named Brian Kennedy with whom she shares one son. Their relationship fell apart and Jessica filed for divorce in August 2019.

Olivia Namath Had Her First Child At 16

In August 2007, Olivia Namath gave birth to a girl, Natalia, in West Palm Beach with her husband. She was 16 at the time. People reported Natalia then was living with Mays in California for an unknown reason. At the time, she was still attending high school in Florida.

After the birth of Olivia’s daughter, her father Joe told the Palm Beach Post there are some things that are wonderful, and Natalia’s birth was one of them. He added he was happy that everyone was healthy.

The baby’s birth certificate had listed the name of the father as Edwin Baker III who at the time was 19. As for a fact, Olivia’s husband Baker is a native of Jupiter, Fla. Police arrested him three times during 2006 on charges of possession of crystal methamphetamine, grand theft, and burglary. A year earlier, police busted and accused him of robbing a McDonald’s restaurant.

The Daily News reported Joe’s ex-wife took the baby to live with her in California so that Olivia could finish up high school.

Olivia Namath married husband Baker in 2013 at the Ca’d’Zan, the historic mansion of circus king John Ringling. As mentioned the couple has a daughter together, Natalia.

Professionally, Olivia’s husband, Baker is an artist whose artwork is rooted in street art and he has found inspiration in artists that include Picasso and Basquiat.

In May 2018, Baker created the collage I Get Better Looking Every Day (2018). It was for the fourth annual edition of Art New York Baker.

In 2010. which was three years after the birth of her first child, police stopped Olivia in West Palm Beach for speeding. Later an officer discovered an open bottle of rum and marijuana in her car.

Olivia, who was 19 at the time, was cruising in a silver Mercedes when the police asked her to pull over, reported the Palm Beach Post at the time. After investigating the car, an arresting officer found half a pound of weed, the Post report said. Olivia denied any knowledge of the substances.

Olivia And Her Sister Really Tested The Patience of Their Parents

Joe Namath said in a 2005 interview with the New York Times that raising his daughters was the toughest when they were between the ages of 12 and 17. The former footballer complained 12 to 17 were tough years. He recalled the incidents and said somewhere in there, it just became almost like they were not being realistic, rational.

He nonetheless remarked the moments as fine because the main thing was learning to be patient, continuing to listen and not just hear. Olivia’s father added understanding those moments reasonably wouldn’t have mattered during those years.

Her Mother Helped Her Father Get Sober

A 2015 ESPN feature on Joe Namath reported his wife Tatiana Mays had a key role in helping him get sober in 1987. Olivia’s father said Mays gave him an ultimatum where she said if he doesn’t stop drinking, it would break up their family. Joe eventually quit, though he would suffer relapses around the time of his divorce in 2003 and infamously during Monday Night Football the same year.

What Is Olivia Namath Doing In The Present?

Unlike Jessica, Olivia doesn’t appear that frequently with her father Joe Namath. However, that doesn’t mean she has grown estranged from her father. The former Super Bowl champion has appeared alongside Olivia and her husband, Edwin at the latter’s art exhibition on several occasions.

In contrast to her father, Olivia is hard to get by on social media. While it’s difficult to say she holds no account over the internet, she seemingly appears aloof to podiums such as Facebook, Insta, Twitter, and such. And her husband too isn’t far from that stance.

The couple has maintained their distance from the reach of tabloids quite well. This, in consequence, has made it quite challenging to extract Olivia’s present lifestyle. Speculations, nonetheless suggest she is quite busy being a mom and perhaps supporting her artist husband.