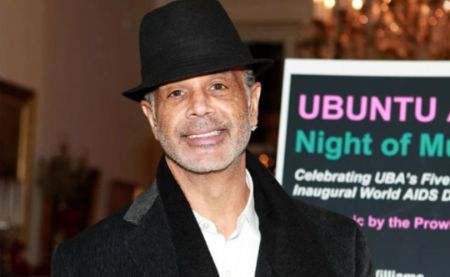 Ramon Hervey II is a film producer and the owner of the Entertainment Management & Brand Consultant company Hervey & Company. He has executive produced films like Chisholm ’72 (2004), Should’ve Been Romeo (2012), and a few others. Besides, he is also a lecturer in Islamic Studies at Ebrahim College.

Along with all his success as a professional, he is also recognized for his marriage to actress and singer Vanessa Williams. In fact, Ramon served as a manager for his then-wife Vanessa. But unfortunately, Harvey’s marital relationship came to an end after around 10 years of marriage.

Well, what was the reason behind their split? Did they have any children from their marriage? Also, what is he doing in his career at present?

Here is everything from his career to his parents and his marital relationships as well.

An American author, film producer, and lecturer, Ramon Hervey II was born on October 18, 1950, in Chicago, Illinois. He is the son of a third-generation Military veteran, Ramon Triche Hervey. Likewise, his mother, Winifred Hervey, is a housewife. His parents had an inter-racial marriage.

Ramon also has five siblings Christie, Ramon, Paul, Winifred, and George. Though Ramon was born in Chicago, his parents, along with the family members, moved to California shortly after his birth.

Talking about his education, he studied at Lompoc Junior High School. Later, he did his graduation from Cabrillo Senior High School in 1968 in Lompoc, California. Finally, in 1972, he received his B.A. from the Whittier College in Whittier, California.

After Ramon finished his graduation, he landed his first job as a flight attendant for Pan American Airlines. He worked there from 1973 to 1975. After quitting his job at the airlines, he shifted his career to the music industry, serving as a publicist for Starlite Music Artists from 1974 until 1975.

Similarly, from 1975 to 1976, he was an editor for Hamlett Marsh Publishers and writer/publicist Motown Records from 1976 until 1977. During his tenure at Motown, he served as the head of the publicity campaigns for artists like Stevie Wonder, Diana Ross, Marvin Gaye, and Smokey Robinson, to name a few.

Later on, after quitting Motown, Hervey joined as a writer and publicist at Rogers & Cowan. Very soon he was promoted to the position of director of music and later as a vice president of music and talent. There he represented several successful celebrities like Bette Midler, Richard Pryor, Herb Alpert, George Benson, Nick Nolte, and The Bee Gees.

In 1981, after quitting Rogers & Cowan, he joined The Gibson Group both as a partner and co-president and worked there until 1986. While at The Gibson Group, he managed celebrities including Little Richard, Vanessa Williams, Bette Midler, and Rick James.

Besides, he has managed clients like Vanessa Williams, Kenneth “Babyface” Edmonds, R&B singer Kenny Lattimore, Philippe Saisse, and many others.

He Is Also a Film Producer

While Ramon has been running his entertainment company for over 36 years, he also leads a successful career as a film producer. In fact, he has already produced some successful movies and documentaries as well.

Back in 2004, he was the executive producer of the documentary Chisholm ’72- Unbought & Unbossed. The documentary even won a Peabody Award. Later, he was the music supervisor for documentaries that include Free Angela and Hot Flash Havoc.

Apart from this, he has executive produced the 2012 comedy-drama film Should’ve Been Romeo and also The 9th Annual American Cinema Awards (1992).

71 years old Ramon Harvey II was married in the past. He married American actress and singer Vanessa Williams in 1987. Their wedding ceremony was held at St. Francis Xavier Catholic Church in 1987. At the time of their wedding, Ramon was 37 and his then-wife Vanessa was just 23 years of age.

Ramon and Vanessa first met after he was hired to resuscitate her career after she resigned as Miss America in July 1984. Later, Ramon even served as a long-term manager of Vanessa.

But around 1996, rumors of Ramon and Vanessa’s divorce began to circulate in the media. In fact, there were also speculations that he was no more managing Williams. The same year in April 1996, Williams’ assistant revealed to Jet Magazine that Ramon was no more managing Vanessa but debunked the rumors of their divorce.

But unfortunately in 1997, the rumors turned out to be true and the couple ended their relationship after 10 years of marriage.

Does Ramon Hervey II Have Children?

In a marital relationship that lasted for around a decade, Hervey welcomed three children with his wife. He welcomed his first child, a daughter Melanie Hervey on June 30, 1987. She is an actress by profession.

His second daughter Jillian Hervey was born on June 19, 1989. She is a successful singer, dancer, and member of the group named Lion Babe.

Well, following their divorce, the couple mutually cared for their children. Shortly after the split, all three children spent time in shift with both their parents. At the time, the ex-couple also took the mutual decision to stay in New York, so that their kids could complete their studies there.

Following the divorce from Hervey, Vanessa went on to marry for the second time Canadian basketball player Rick Fox. The couple married in 1999. With her second husband, Vanessa also welcomed a daughter named Sasha Gabriella Fox on May 1, 2000. But unfortunately, their relationship didn’t last long and they divorced in 2004.

As of 2022, Vanessa is married to retired accountant and real estate agent Jim Skrip. The two married in 2015, however, they have not welcomed any children yet.

What Is Vanessa Williams’ Ex-Husband Ramon Hervey II Net Worth?

Well, Ramon is undoubtedly rich and has amassed a huge fortune, primarily from his professional career. As of 2022, he is estimated to have a net worth of around $10 million. On the other hand, her ex-wife Vanessa Williams has a net worth of $25 million.