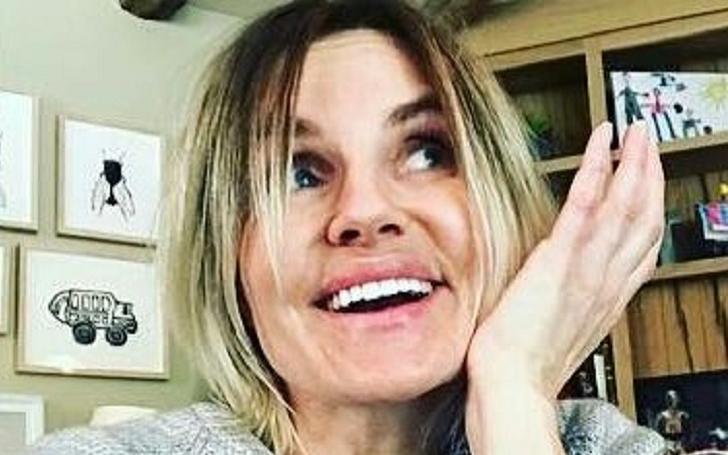 Tana Mundkowsky (aka Tana Flowers) is a former retail manager who once also worked as a school teacher. But, Tana only came into the limelight after her marriage to Brandon Flowers, the lead singer of the rock band The Killers. Her husband is also the keyboardist of the band.

For their marital relationship, the couple has been married for a decade and more. And the long-lasting duo is also blessed with three children. Despite their blissful married life, the two have had also their fair share of ups and downs over the years. Brandon Flowers’ wife Tana has been diagnosed with complex PTSD for a long time, stemming from numerous horrific traumas from childhood to adulthood.

Aside from all that, we will talk more about Tana’s life here including her love for knitting and animal. Let’s begin!

Who is Tana Mundkowsky? Her Age and Early Life

As we have mentioned above Tana is popular as the wife of the rock star Brandon Flowers. For her date of birth, Mundkowsky was born in the same year as her husband Flowers was born. As of 2022, her age is 40.

While the details of her parents are yet to be revealed, she has a brother named Torey Mundkowsky, a photographer.

Born in the United States of America, Tana belongs to American nationality and is a Caucasian as per her ethnicity.

What is Tana Mundkowsky doing at present? Her Career

In the past, Tana used to work for the American designer Betsey Johnson. She once also served as a retail manager of Urban Outfitters, a trendy clothing store in Flowers’ hometown of Las Vegas, Nevada.

A little more known about her career is that Mundkowsky once also was a school teacher.

Additionally, Tana is a passionate knitter. She has even mentioned herself like, “I knit with passion,” on her Instagram profile.

Tana and Her Future Husband Brandon met in their early 20s

The once-time retail manager met her then-boyfriend Flowers in 2001 at a thrift store called Buffalo Exchange on Flamingo Road in Las Vegas. At the time of their first meeting, both of them just hit their 20s. The main vocalist of The Killer band visited the store with his bandmate Dave to buy some supplies for their first-ever gig.

And It was there Flowers noticed a girl, wearing a bootleg Joy Division t-shirt with Mickey Mouse on it and a pink trench coat. She was none other than his future-wife Tana. Instantly, it strike on Brandon’s mind that the lady was too cool than him and it would also be much better to hang out with.

“She worked at Betsey Johnson. She was cooler than me. I believe in fate. She’s perfect for me. I knew early on. She’s just different, creative, full of life.”

In the meantime, Mundkowsky was just working for the famed designer Betsey Johnson. Anyway, by the end of their conversation, she also gave him her number.

The singer once said,

“She wrote her number down, and she gave it to me.”

He later acknowledged that he couldn’t wait for long and called her that night.

After some time, the two went on their first date. Talking about their first-ever date, Tana recalled that her new boyfriend, “took me to an all-night record store and quizzed me on different artists – everything from Bowie to the Smiths and Leonard Cohen. I passed when I told him I had the import version of a Bowie album.”

Tana is Also a Music Lover

Just like her husband, Mundkowsky has also shared the same love for music. When they first met, she played Tom Waits‘ song ‘Ruby’s Arms,’ for him while they were driving through Vegas. Flowers said of their love for music,

“My wife and I bonded over this song when we first met.”

He also said both of them even cried in the car at some point.

Tana Mundkowsky and Brandon Flowers married in a small ceremony

After dating for about four years, Brandon and Tana exchanged their vows on 2nd August of the year 2005. They wed in “a small, intimate wedding” ceremony held on the island of O’ahu in Hawaii. As per The Killers’ spokesperson, his band members Dave, Mark, and Ronnie were among the few other attendees.

Soon after their nuptials, they moved into their new house Henderson, 10 miles from the Las Vegas strip. They later bought their house, in the Snowy Slopes of Park City, Utah and it is where they reside now.

Shares Three Kids With Her Hubby

Mundkowsky is the proud mother of three children with her spouse. The couple welcomed their first child, Ammon on 14th July 2007. Their second child, a son Gunner was born on 28th July 2009. And Brandon Flowers’ wife Tana gave birth to their third son Henry on 9th March 2011.

Back in 2010, the rock star told Daily Mail that he expects to cut back on touring to be with his children,

“I love music, but I want to spend more time with my children. I’d like to be around when they start school.”

Tana is an Animal Lover

As soon as she married Flowers, she adopted two puppies. One of them was a Nikita and the other one was a poodle. She often shares photos of her pooches on her social media handles too.

Over the years, Tana is involved in many charitable causes. Once, she even shaved her head for St. Baldrick’s Foundation, a non-profit organization. It aims to raise funds to help children with cancer.

When Tana was dating Flowers, she secretly started reading the Book of Mormon without letting him know. It was only Brandon’s sister who knew about that. But, after Flowers moved back home from touring, he also knew that his then-girlfriend converted to Mormonism.

What happened to Tana Mundkowsky? Her Struggle With PTSD

For the past several years, Tana has struggled with complex PTSD. The singer and songwriter Flowers opened up with Radio X about all the trauma his wife faced. He said that he once even missed his solo concerts in August 2015 because his wife was contemplating suicide.

“I cancelled that tour, because she got to a point – this is really hard for me to even say the words – but she was having suicidal thoughts. That was as bad as it got.”

Flowers also said that the duo has been through a “horrible” time. The singer also dedicated the song “Some Kind of Love,” to his wife.

“Over the last few years, it has become a big part of our life. The end of the song is me and my boys singing, ‘I can’t do this alone/We need you at home/There’s so much to see/And we know that you’re strong.’ It’s really emotional. I played that for her, and she just sobbed. But I’m proud of that one.”

Unfortunately, the exact amount of Tana Mundkowsky’s net worth is not yet estimated. On the other hand, her spouse Brandon has a fortune of $25 million. He mostly makes money from his music career.