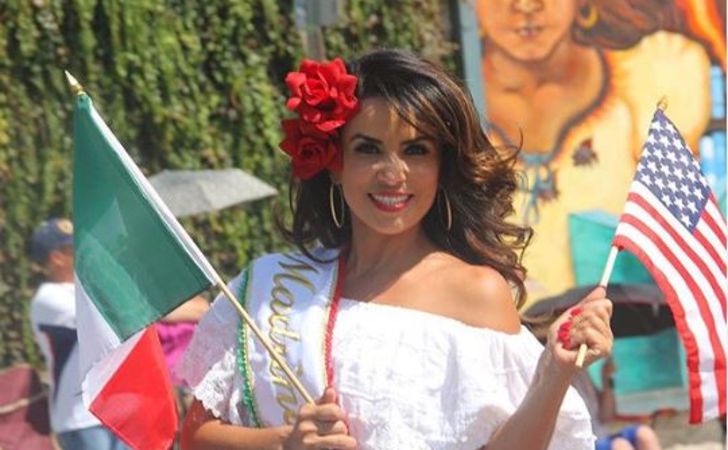 Alysha Del Valle is a news anchor and a traffic journalist from Los Angeles. Starting off as an assignment Desk Officer on LA’s Fox 11 News, Valle currently works for NBC4. Further, she has worked for several other major news channels ABC News.

Apart from her professional life as a journalist, her personal life is also pretty intriguing. She has a daughter but the details of her marriage and love affairs remain a mystery. Besides, Alysha’s relationship with her daughter could be another interesting thing to know.

Well, in this article, we are going to explore all about Valle’s professional and personal life. Find out about her net worth, social media presence, parents, and things you had never known about her.

The beautiful journalist Alysha was born on February 17, 1972, in California, Los Angeles. Born in a Christian household, she shares a great relationship with her parents, father Leo, and mother Linda Perez Valle. She also has a sister named Julie.

Besides, Valle comes from a family of Mexican Heritage and is very fluent in the Mexican language. Talking about her education, finished her schooling at a local high school, and later attended the University of Southern California. She eventually graduated with a degree in Mass Communication in 1994.

She Shares a Great Relationship with Her Parents

It is not very unusual but Alysha Del Valle shares a very deep bonded relationship with her parents. She is close to both her father and mother.

Be it celebrating her parents’ birthday or wishing them on father’s or mother’s day, Alysha doesn’t miss a chance to cheer them. In fact, she has even made several posts on her socials, celebrating on different occasions with her elderlies.

Well, just recently on October 27, Valle made a beautiful post of her mother wishing her a birthday. More than anything, the post pretty clearly reflects the kind of relationship she shares with her mom.

Happy BORN DAY madre!! You are so loved, happy birthday to my beautiful, generous, kind, loyal and *fun* momma bear 🎂✨ I thank my lucky stars the universe gave us to you 💫 ((Swipe to see some pics of the #birthdayqueen!)) @lindaperezvalle

Not only this, but she has even made several posts with her father as well on her Instagram. On the occasion of father’s day, Alysha posted some really sweet photos reviving back the memories with her dad. Check out the post.

As of 2022, Valle works as an anchor of the morning newscast entitled “Today in LA” on NBC4 in Southern California. She appears on the show on weekdays from 4:00 to 7:00 a.m. Further, she also is the co-host of “The Challenge,” NBC4’s post-game sports activities show. She hosts the show alongside Fred Roggin.

Talking about the history of her job, she started as an assignment Desk Officer at Fox 11 News in LA. Eventually, she shifted to ABC7, where she covered interesting local stories. With the network, she hosted an evening show called LARV LIVE.

Apart from these, she has also served as the traffic reporter for The George Lopez Morning Show on Hot 92 Jamz. However, she was most famous for her two-morning show with 102.7 KIIS FM, where she hosted two segments of Film girl’& On the Streets with Alysha Del Valle.

Since Alysha suddenly vanished from ABC7 shows, the rumors that she was fired became a huge subject. While Valle has not officially spoken on the matter, a few sources claim she was not fired from the show but rather left by choice since her contract had expired.

Is Alysha Del Valle Married Or Dating a Boyfriend?

When it comes to her love life, Alysha is pretty reticent. But it looks like she is neither married nor dating anyone at present. Further, there had also been rumors of her engagement, but all the speculations are untrue. Over the years, Valle has remained very tight-lipped about her love life. However, she was reportedly in a relationship with a guy named Ray Castillo Jr.

While Alysha and her reported ex-boyfriend Ray are no more together, they had a daughter together from their relationship, Rain Paloma.

She Is A Mother of a Daughter

It may come out as a surprise but Alysha is a mother of a 27-year-old daughter Rain Paloma. She was born on June 7, 1994. Well, they share a great mother-daughter relationship.

Like any mother, Alysha never misses an opportunity to please her daughter. Be it going on any events, on vacation, or celebrating an occasion, the two are always seen together.

Recently, in June Alysha shared a few beautiful photos together with her daughter on her Instagram, wishing her a birthday. She came up with a really sweet caption where she wrote,

My heart. Happy born day @raineeboots ♥️✨ With all that is happening, it was very important to make you slow down this weekend, so your family and friends can celebrate you .. YOU ARE SO LOVED. ♥️ And if these times get to be too much, remember you are my daughter, and I will love you and protect you til the end of my days.

My heart. Happy born day @raineeboots ♥️✨ With all that is happening, it was very important to make you slow down this weekend, so your family and friends can celebrate you .. YOU ARE SO LOVED. ♥️ And if these times get to be too much, remember you are my daughter, and I will love you and protect you til the end of my days. #happybirthday #palomita #littletwinstar #mommydaughtertime #gemini #babygirl #chicana #birthdaymija #family #familia #grateful #LAwoman X 2 💋💋 ‘When the roots are strong, the fruit is sweet.’

Alysha is a sports enthusiast. She loves football and is a huge fan of the Los Angeles Lakers. In fact, in 2019, she was even out for a night watching a Lakers match along with her daughter, which she even shared on her Instagram.

Similarly, she also likes playing golf. On September 18, 2020, she shared a clip on her Instagram, playing golf. “working on my swing,” she wrote in the caption.

Good to be back! Working on my swing, and wowww with these CLEAR SKIES and coastal breezes .. Long Beach you showing off 😍 ((Thanks coach @troygrantgolf ⛳️)) #golf #golfer #LBC #drivingrange #chicanaswhogolf #ilovegolf #swing #relax #chinup #hips #NOTsoftball #wishtheyallcouldbecaliforniagirls 💋

As of 2022, she has over 75.6k followers on her officially verified Instagram account. Likewise, she has been active on Twitter since October 2017 and has over 9000 followers.

Most of her social media posts are about her professional and family life. However, she hardly makes any posts related to her romantic relationships.

What Is Valle’s Net Worth?

To be precise, she has not revealed her net worth yet. But as an NBC journalist and a board member at the East La Weingart YMCA, her wealth is assumed to be at least in six digits.