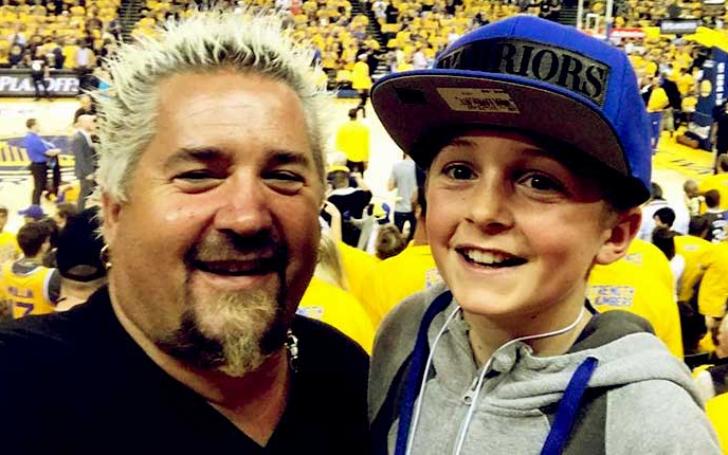 Ryder Fieri is the youngest son of renowned chef Guy Fieri. His father initially made a name for himself after winning the second season of The Next Food Network Star back in 2006. Since then Guy has been the face of American food television bringing in the mass-market culture.

Back in the Fieri household, Guy is quite the lucky man. He is a father of two and relishes a terrific marital life with his long-time wife. Besides, his oldest son Hunter has already walked in his dad’s footsteps. But what about Ryder? What is his passion?

Let’s take a close look into the life of Ryder Fieri and find out if he is also a passionate cook or not.

He was born on December 31st, 2005, as the second son of Guy Fieri and his wife Lori Fieri. Ryder has Italian ancestry. His great-grandfather, Giuseppe Fieri immigrated to the United States from Italy. At first, Ryder’s dad was named Guy Ramsey Ferry but he later changed his surname to the original version.

Ryder spent the major portion of his childhood in Santa Monica, California. He studies at the Westlake High School in Westlake. On the other hand, his older brother Hunter graduated high school in 2015 and enrolled in the Culinary Arts course at the University of Nevada, Las Vegas.

His older brother Hunter is following in their father’s footsteps

Hunter Fieri, born August 13, 1996, is the oldest of the Fieri brood. Although we’re yet to know if Ryder has the same passion for cooking as his dad, Hunter here has been working alongside his dad for several years.

He is helping out his dad in the kitchen since Guy’s early TV days. Moreover, he also worked in several of the Fieri family restaurants over the past couple of years as stated by a profile in Delish. Many of you might be thinking Hunter’s daddy helped him climb the ladders quickly but that’s not the case here. In fact, if anything the Fieri hates is nepotism, especially Hunter.

As of now, he is on the verge to become the next big thing in the food business.

So far, Guy has not said anything in regards to his youngest son’s interest. However, he has once mentioned that his son is a ballplayer and a pool player. He is into basketball and used to play for the Our Lady of Guadalupe Basketball team.

Well, it seems Ryder is still figuring out where his interest lies and doing what any regular teenager does. Even if he doesn’t tread on the same path as his dad and brother, the Fieri family is always supportive of him.

Ryder  Fieri’s Personal Life: He has a Girlfriend

The handsome young fella is in a relationship. He is dating a girl named Sophia Soltanizadeh. We came across the information through Ryder’s Instagram handle wherein he has written her name in his bio alongside a heart emoji.

Furthermore, Ryder’s dad Guy also mentioned Ryder being a great boyfriend while he congratulated his son on his 15th birthday on Twitter. Take a look!

So proud of you my son, 15 years has flown by!
You are a great person, friend, ball player, boyfriend, pool player, and most importantly son!
Love you,
Dad pic.twitter.com/xTfR6Yw3GP

Apart from this, not much is known about Ryder’s dating life with Sophia. We’re sure they’re a happy couple. Meanwhile, his girlfriend is an athletic individual and played for Santa Rosa Rug Rats.

Guy and Lori Fieri exchanged vows in the year 1995. The duo first met in the year 1992 in a restaurant managed by Guy. Unlike any usual first meet, their first conversation was rather unorthodox.

One of Lori’s friends was removed from the restaurant which Guy was managing and wasn’t allowed in the restro for the next couple of weeks. However, Lori thought otherwise and decided to confront the manager. Both Lori and her friend decided to go to the restaurant, but seeing the lady Guy immediately stood up and said, “Hey, listen, wait a few weeks before you come in.”

As Fieri was asking the ladies to go back, he then glanced at this blue-eyed blonde who was giving him the mean mug. She told him that he can’t make them leave for which Guy replied, “You don’t have to.” And this was the beginning of their wonderful journey.