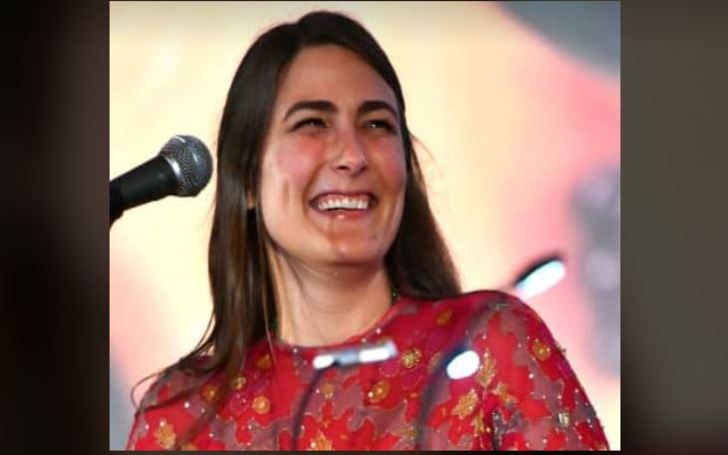 Jade Castrinos is a former female vocalist and founder of the folk-rock band from Los Angeles, Edward Sharpe & the Magnetic Zeros. Castrinos catapulted into recognition after she co-created Home from the album Up from Below with the band.

Some of her other hit songs include That’s What’s Up and 40 DayDream. Jade Castrinos has been making, playing, and dreaming of music since she was a little girl. Her creativity and deep love for music have helped her explore many of the different facets of music-making.

Castrinos has both played in bands and worked solo and she is as skillful a songwriter as she is a musician and singer. She is known for constantly developing and growing her music. Know about her to the fullest; her childhood, how she became a member of Edward Sharpe, why she quit, and what is dong now. Also read if she has a husband, boyfriend, or is she all on her own.

Jade Castrinos was born in St. Petersburg, Florida. Until the age of four, she lived in Treasure Island, Florida, and after that, she and her family moved to Las Flores Canyon, Malibu where she grew up the most.

Jade once revealed she always used to sing as a little kid and added she started writing songs and playing in a band with her dad, George when she was about 11 years old. She first picked up a guitar at 6.

In an interview, Jade disclosed she developed a love for music after listening to the Canadian singer Joni Mithell’s songs. Her mother used to play Mitchell records while cooking.

The Malibu native said the confidence to make a mistake in front of her father enabled her to discover her voice.

She though claims it is her father who has been her biggest musical influence.

How Did Jade Castrinos Become The Member Of Edward Sharpe & the Magnetic Zeros?

The rock band however celebrate its official launch date in 2007. Two years later, the band, which pays homage to the So-Cal spirit, released its debut album called Up From Below.

They released their hit single Home from their first album in May 2010. The song as of 2021 has over a 100million views on YouTube. The debut album, Up From Below, also featured 40 Day Dream and Jangling.

Unlike other groups, the members of the band came together with little by little, as the group hired new musicians to help complete the first album.

Her Other Achievements With Edward Sharpe & the Magnetic Zeros

She along with the band spent years touring the world while winning over audiences at festivals like Coachella, Bonnaroo, Lollapalooza, Leeds, Austin City Limits, and more.

Jade and her former band released their second album, Here in May 2012. It featured the tracks Man On Fire and That’s What’s Up.

Here debuted at #1 on the Independent Music Chart and #5 on Billboard Top 200 Chart the week after its release.

She whilst a member of Edward Sharpe also toured with Mumford & Sons. The Florida-born artist also spent some time opening for a singer-songwriter, musician, occasional actress, and model, Cat power.

Jade would officially leave Edward Sharpe and Magnetic Zero in 2015.

In June 2014 Edward Sharpe and The Magnetic Zeroes announced they were parting ways with Jade Castrinos.  The band was about to kick off their latest North American tour.

Ebert allegedly refused to go into details “out of respect for Jade,” but explained by saying, “we did not feel right doing this tour with Jade. That fact breaks my heart in ways I don’t want to describe.”

After she was cut off from the band, the vocalist took to her Instagram and wrote,

“For seven years I sang and wrote music with Edward Sharpe. They voted me off of tour a week before they left, via email. lol.”

The termination wasn’t all of a sudden. Castrinos had started to become absent about some months ago before the eventual news.

Her Former Members On Why She Left The Band

To her Instagram post, The band responded in a long Facebook post that said “Anyone on here who thinks the story could be as terribly and flatly painted as Jade conveniently did has no idea what this band has always been about.”

They ended the message by telling the people who were seeing it otherwise, “It is beneath you and it is grotesquely damaging.”

Then in 2015, the band again tried to explain the reason behind their and Jade’s partition. In their Facebook feed, they wrote,

“You should know Jade quit. We didn’t kick her out. We asked her to take off one tour. So she quit and told you she was booted.”

What Jade Castrinos Is Doing Now?

Sometime after leaving the band when asked what her next plan was going to be, Jade said,

“the master plan is to write and sing and play forever, no matter what.”

She also disclosed after departing the band, she went to a songwriters’ colony on Nantucket where she met some collaborators and it gave her vision as to what her records were going to be.

She Collaborated A Few Times With Jakob Dylan

The Internet has it Jade is currently working solo. Sometime after leaving the band, she collaborated a few times with singer and songwriter Jakob Dylan, the son of Bob Dylan and lead singer for the roots-rock outfit the Wallflowers. The two released their cover Go Where You Wanna Go in Nov 2019.

The same year in Aug, the two also performed at the Late Show With James Corden. Jade has also appeared and performed on other major late-night shows like Conan O’Brien, David Letterman, and Jimmy Kimmel.

With Jakob Dylan, she additionally recorded a cover for the soundtrack of the documentary Echo in the Canyon.

Earlier, the duo had performed at Showtime’s Emmy Eve festivities in September 2015.

It, therefore, remains a mystery if the former band member of the Edward Sharpe has a husband, a partner, or all single.

Something that might be worth remembering though is during the formative years of Edward Sharpe & the Magnetic Zeros, Castrinos dated fellow band member and the lead singer, Alexander Ebert.

With Ebert, she wrote their most popular song, Home. Some claim the song is a snapshot of a time when they were blissfully in love. They, however, ended their relationship after some time. Though, even after the split, the pair managed to perform together for a while.

When Castrinos departed the band, Ebert used the crowd to fill in her vocals at subsequent performances.