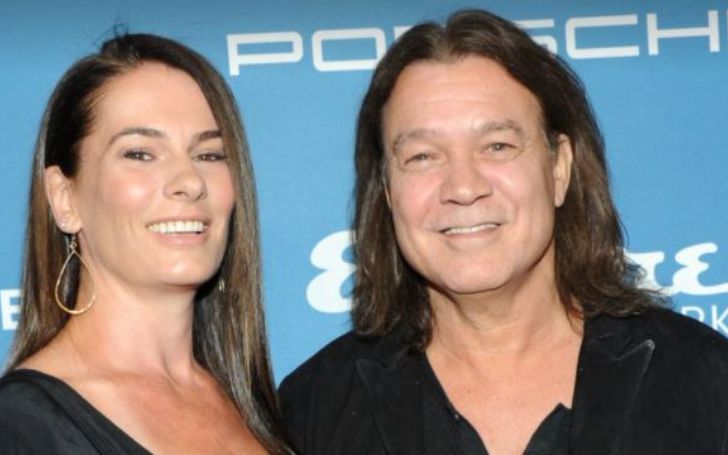 Janie Liszewski is a stuntwoman-turned-publicist and a ballroom dancer who is better known as the wife of the late Eddie Van Halen, a musician, and songwriter. Janie’s husband was the main songwriter, guitarist, and keyboardist of the rock band Van Halen. Some of the popular songs of the band include Jump 1984, Eruption 1978, Dance the Night Away 1979, Runnin’ With the Devil 1978, Unchained 1981, and others.

Halen and Janie remained married from the late 2000s till the former’s death in 2020 but beyond the wife of the Van Halen’s frontman, Mrs. Eddie has been a bit of an undisclosed profile. Liszewski nonetheless has quite a veritable resume. For starters, she is quite athletic and also has a background in stunts.

She stepped into Hollywood as a stunt woman and according to her IMDB profile, Liszewski holds credits for 16 projects between 2001 and 2005. She is known for doing physical works in films like From Dusk Till Dawn (1996), Mulholland Drive (2001), and Bubble Boy (2001).

Know more hh about him in the spread below; how she made a mark in the entertainment industry, who was she prior to meeting Halen, her life after his death, and more.

Janie Liszewski Was Born In Pennsylvania

The wife of the Jump singer, Janie Liszewski was born in 1970 in Pennsylvania, USA. While Janie hasn’t mentioned much about her parental history, her mother passed away the same year she lost her husband.

The 52-year-old has often said that she used to be a tomboy before exploring the world of publicity, pro wrestling, and ballroom dancing. Liszewski, a former William S. Hart High went to study stunt at SAG-AFTRA.

What Is Janie Liszewski Doing Now?

Mrs. Van Halen is currently a publicist and owns her own public relations agency High Profile Media. Her late husband’s band is among her clients. At points, she had exclusively represented her husband’s band.

Before becoming a publicist, Janie worked as a stuntwoman. While she has quit stunt work, she still appears to have some interest in her former work. Liszewski is also a pro wrestling manager for “King Louie’s” under the name Lita Lamae.

She began this journey of hers in 2019. She started working as his publicist in early 2007. Before that, she was a working PR for the adult film industry.

She Is A Dancer As Well

Liszewski is also a ballroom dancer. She partners with Louie Martinez, who uses the name “DNCNLouie” on Instagram.

Based on their official Instagram account, they have been dancing together since early 2019. Their collaborative YouTube channel, in addition to showcasing their dance competitions, also includes wrestling videos.

The first movie Liszewski worked on as a stunt woman was The Wedding Planner starring Jennifer Lopez and Matthew McConaughey.

Janie Liszewski As A Stunt Woman And An Actress

In 2001, Liszewski was busy with stunt credits in several movies including Max Keeble’s Big Move, Bubble Boy, and Mulholland Drive.

She has also worked behind the scenes for films including The Wedding Planner, Looney Tunes: Back in Action, Along Came Polly, 2004’s Spider-Man 2, and 2005’s Havoc. Liszewski additionally also has a few acting credits.

In addition, Liszewski also has acting credits in the 1996 movie From Dusk Till Dawn starring George Clooney. She likewise has had a minor role on CSI: Miami in 2003 and had a small appearance in the 2002 film The Third Society, the 1996 series Profiler (as she plays Vanjour).

She further also has a boutique agency. Her online footprint is full of DJ duties, morning hikes, and her Pomeranian puppy. She clearly loves Pomeranians. In the meantime, the five-foot-four-inches-tall also cooks and posts pictures of Boston cream cupcakes.

Where Did Janie Liszewski Meet Her Husband Eddie Van Halen?

Liszewski met her current partner, Louie, at a charity event in 2006. The second wife of a Dutch-born rockstar was doing PR for a film production company and Halen just happened to be doing the soundtrack for one of their films.

Two years later, Van Halen proposed to Janie in the summer of 2008 in Hawaii. A wedding followed a year later in June 2009.

Janie and Halen had their ceremony in the garden of the latter’s seven-acre estate in the hills above Studio City, Calif. It was Liszewski’s first time walking down the aisle while the Eruption singer’s second.

After marrying Janie, Halen gave up drugs and alcohol for good. Before Lewziski, Halen had married an actress Valarie Bertinelli in 1981.

They though divorced in 2006 after 25 years of marriage. With Bertinelli, the late husband of Janie had a son, Wolfgang Van Halen. Halen’s first marriage with Bertinelli ended partly under the weight of Van Halen’s drug and alcohol addiction.

Her husband of more than ten years, Eddie Van Halen passed away on Tuesday, Oct. 6, 2020, of throat cancer. After her husband’s death in October, the Van Halen frontman’s spouse wrote a rather bulky and heartfelt Instagram post that read,

“My heart and soul have been shattered into a million pieces. I never knew it was possible to cry so many tears or feel such incredible sadness …  Saying goodbye is the hardest thing I have ever had to do so instead I say so long, I will see you again soon in a place with no pain or sorrow.”

The doctors had found out about Lewziski’s husband’s mouth cancer in 2000 after which the guitarist had tongue surgery. The Dreams singer later also battled lung cancer and had been receiving radiation treatment in Germany.

Things got worse when Eddie got in a motorcycle accident in early 2019. He also struggled with a brain tumor and subsequently received gamma knife radiosurgery to treat the illness.

During the time of his death, his wife, Janie, was by his side, along with his son, Wolfgang, his ex-wife Valerie Bertinelli, and Alex, Eddie’s brother, and drummer.

Halen was not the first or the last loved one that Janie lost in 2020. Contrary to her successful career, Janie experienced heartbreaking incidents throughout 2020.

It started when she first lost her brother Tom on June 17, 2020. Four months after this tragic incident, her husband, legendary guitarist Eddie Van Halen passed away in October 2020.

The misery increased when Janie’s mother passed away on 23 November 2020, two months after the loss of Eddie.

Liszewski’s late husband wasn’t the only member of her family who learned to navigate cancer scares and treatments. In fact, she, herself, has spent years in and out of the doctor’s office.

In 2019, the ballroom dancer, on her Instagram wrote that doctors had been monitoring abnormal nodules in her thyroid for years as it can result in a factor of cancer.

“I was finally cleared and told they have not grown/changed and are not cancerous. I am so relieved and grateful,”

said the ex-stuntwoman of her cancer battle. After some time the doctors, however, gave her the green signal as the nodules were tested to be non-cancerous.

Two years later, Liszewski went through another scare, this time in regards to her breasts. She, fortunately, survived this too but it took her two tries to get through the biopsy.

Of this, she wrote,

“I had a massive anxiety attack. A flood of emotions and a large amount of pain when the needle was inserted and I passed out.”

A week later, Liszewski announced via her Insta that the lumps in her breasts were benign. While the experiences might have been emotionally exhausting for her, Liszewski now uses her story to inspire others.

Ever since her cancer struggle, Janie has been occasionally talking about the disease and its prevention measures. Through her socials, she often sends messages to people to stay on top of their health stuff and also urges them to follow up on monitoring, tests, or appts.

Did Janie Liszewski Inherit Eddie Van Halen’s Fortune; What Is Her Net Worth?

Janie’s late husband understandably was a multi-millionaire. He made his $100 million net worth mostly through music working since the ’70s. With 10 studio albums, Liszewski’s husband’s band was one of the best-selling in the US, with 56 million units sold.

In the latter years, Halen also added his own line of guitars, EVH as one of his avenues of income. Not to mention, the Rock and Roll Hall of Fame also owned a handful of real estate. Boosting his fortune more was his apparel business

While it is reported that Halen did leave a will during the time of his death, the specifications of the terms and conditions are yet to hit the public’s knowledge.

What people or online sources have widely discussed though are his family members each got to share his million-dollar properties. Among the primary receivers are his wife Janie, brother Alex, son Wolfgang, and reportedly some portion of his ex-wife Valerie as well.

Whatever the case though the figures that Liszewski inherited are still a matter of speculations and conjectures. What nonetheless can be assumed safely is Janie sure must have a good financial standing very much owing to her husband’s nine figures net worth.