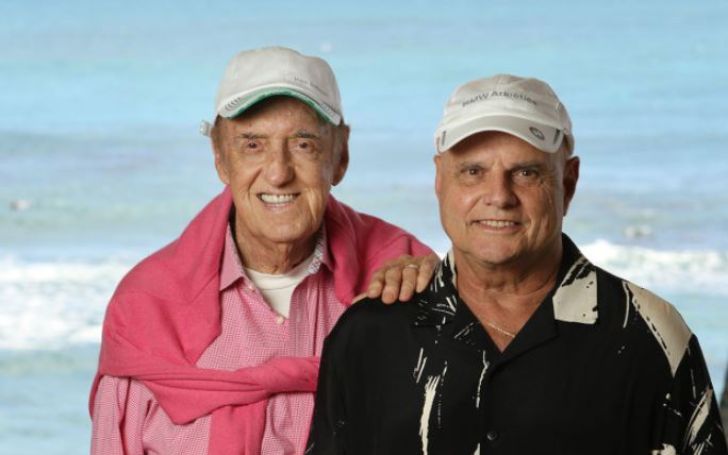 Stan Cadwallader is a retired American firefighter most famous as the ex-husband of the legendary comedian Jim Nabors. The comedian is famous for his work in several TV shows and movies including The Andy Griffith Show, and The Jim Nabors Show, among others.

Although Jim is no longer with us, fans are still wondering about his partner of many years Stan. The biggest curiosity that itches us all is what is Jim Nabors husband Stan Cadwallader doing these days?

In this article, we’re going to find out about Stan’s life before he found Jim, his career, and his current whereabouts!

Stan Cadwallader is a Michigan native

Born on November 30th, 1948, Stanley D Cadwallader gained country-wide fame for his relationship with Jim. He is currently 74 years old. The celebrity spouse spent the major portion of his childhood in the state of Michigan. Similarly, Stan also graduated high school from Petoskey High School in Petoskey, Michigan.

However, later on in his life, Stanley decided to make a move to the island state of Hawaii. Interestingly enough Stan met his future husband in the same state.

Besides, Stan belongs to English-Welsh ancestry and has a caucasian ethnicity. Moreover, he is an American by nationality.

Talking about his family, there isn’t any information available about them. Considering the fact that he was born in Michigan, it is probable his family members are still living there.

Before Stanley first met his late husband Jim, he was working in the Honolulu fire department. Stan had moved to Honolulu after spending his formal years in Michigan.

Back then he was living in a boat and around the time when he and Nabors met, he was still living in the same boat. Seems like his love for the sea inspired the decision to move to the small pacific island and to top it all of, he was sleeping in a boat.

Well, everything worked out well for Stanley in the end as his future husband also fell in love with Hawaii and moved there permanently.

In the 70s, Jim became an honorary naval pilot for the U.S. Navy 28th battalion. Nevertheless, him becoming a part of the Navy was like a person becoming a Naval cadet without knowing how to steer a ship. He didn’t have a pilot license. Fortunately, his partner Stan had.

It was in the year 1978 when Stan became a licensed commercial pilot. Cadwallader used to fly around the island of Hawaii with his husband Jim and their pack of dogs. The family often used to visit their farm in Hana.

How and when did Stan Cadwallader meet his late husband Jim Nabors?

Out of all the days in a year, your birthday is often considered your luckiest day of the year. Likewise, one of Jim’s birthdays turned out to be his best. On the occasion of his 45th birthday in July 1975, he and Stan meet for the first time.

What happened was, Jim was at the Ala Moana shopping center. Incidentally, Stan happened to be in the same store, and upon glancing at Jim, who had become quite famous by then, Stan went up to him for a chat.

The two subsequently hit it off and as Jim was carrying a fine bottle of Dom Perignon they decided to dine the very same night. As the night passed on, the pair found out that they had a lot in common.

Since that day, they remained together as a couple before taking their relationship to the next level.

They married after dating for 38 years

After remaining together as a couple for around four decades, Jim and Stan finally married. They exchanged vows on January 15th, 2013. The beautiful ceremony was held at Fairmont Olympic Hotel in Seattle.

In attendance, a couple of their mutual friends bear witness to the function. The news of their matrimonial didn’t go out until after a couple of days. Furthermore, their nuptials comes a month after the state of Washington legalized gay wedding a month before.

Although Jim didn’t care for a wedding, he still wanted it to be formally acknowledged.

Jim Nabors never formally came out as a gay

From the beginning of his career, Jim never really said anything about his sexual orientation. We all know that back in his time the industry or in fact the whole country wasn’t really used to the whole gay relationship thing.

However, Jim’s decision to refrain from talking about his sexuality was something different. In an interview with Hawaii News Now back in 2013, “I’m not a debater. And everybody has their own opinion about this and actually, I’m not an activist, so I’ve never gotten involved in any of this.”

He further added, “I’m 82 and he’s in his 60s and so we’ve been together for 38 years and I’m not ashamed of people knowing, it’s just that it was such a personal thing, I didn’t tell anybody.”

Besides, many of Jim’s close friends already knew about his sexual orientation from the beginning.

Where is Stan Cadwallader now? Is He still alive?

Ever since Jim passed away in November 2017, Stan has been living a low profile. Not that he ever showed himself in public even when he was married to Jim.

Before Jim’s passing, the duo had been living in O’ahu, Hawaii. However, after his death, the estate was sold for a staggering $12 million in 2018. Moreover, Jim’s massive property in Maui was also listed for sale back in 2019 for a whopping $5 million.

It looks like Stan has decided to spend the remainder of his life somewhere quiet.  Although there hasn’t been any news of him since 2017, it is safe to say, he is doing well.

Talking about his partner’s death, Nabors died on 30th Novemeber 2017. He died at his home located in Honolulu, Hawaii at the age of 87.

How rich is Stan Cadwallader?

Being a celebrity spouse does help you live a lavish life. Similarly, Stan also lived a prosperous life with his late husband Jim Nabors. For the major portion of their relationship, the duo lived in Hawaii.

Around the time of his death, Jim’s net worth was estimated to have been over $15 million. After his passing, the majority of his wealth must have been passed down to Stan, though it cannot be confirmed.