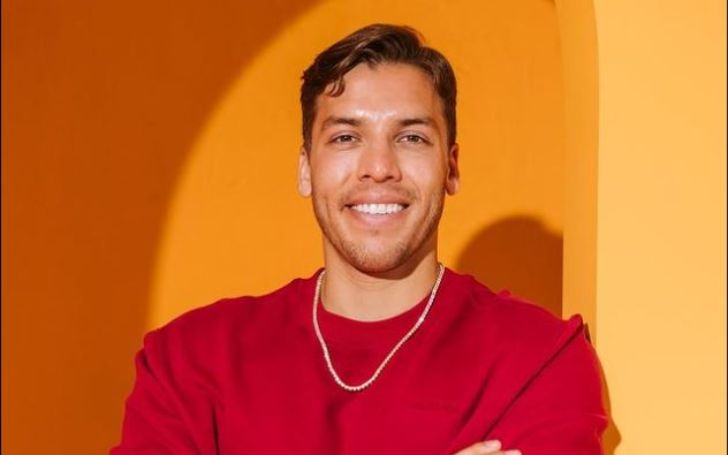 Joseph Baena is an actor, bodybuilder, and real estate agent better known for being the son of Arnold Schwarzenegger from his illegitimate relationship with his housekeeper Mildred Patricia Baena. His father is a famous bodybuilder turned actor mainly known for being seven times Mr. Olympia’s winner and for his acting in many movies including the Terminator series.

Born from an extramarital affair, Joseph gained fame soon after his parent’s affair came into the media. For the same reason, he also had a go through a rough phase in life but what is he doing at present? When did Joseph come to know about his biological father? Well, in this article, we will explore his career, family background, girlfriends, & much more.

Joseph Baena: Details on His Birth and Age

He is the son of father Arnold Schwarzenegger and mother Mildred Patricia Baena born on October 2, 1997, in Los Angeles California. Talking about his age, he is 24 years old as of 2022 and his zodiac sign is Libra.

Similarly, regarding his racial background, he has a mixed ethnical background where his mother belongs to Guatemalan ancestry and his father belongs to Austrian and Czech origin. Likewise, he is an American as per his nationality.

Further, his maternal grandmother’s name is Evelyn Peña and his paternal grandparents are Gustav Schwarzenegger and Aurelia.

He is a well-educated individual. Joseph completed his high school at Frontier High School. Later down the line, he joined Pepperdine University in 2015. Likewise, he also later earned a Bachelor’s degree in Business Administration.

You may wonder when Mildred Patricia’s son discovered his real dad. He was just 13 years old at the time and in an interview with Men’s Health magazine he said,

I remember the day very vividly, I was in the eighth grade. Fifth or sixth period. And I get called out of class to leave. And my mom’s there, and she’s like, ‘We gotta go — everyone is finding out about you and who your father is.’ … And now my life transformed before my eyes.

On the other hand, it took the seven times Mr. Olympia winner seven to eight years to realize that Joseph was his son. Talking about the matter Arnold stated,

It just appeared to me there was something off that he started looking like me. So that’s when I kind of got it. It was never discussed. But, I mean, I put the things together here. I felt like that I should take on the responsibility of taking care of him and her. And so I started taking care of Joseph financially.”

He has Five Half Siblings

The star kid Joseph Baena has five half-siblings. He has an elder sister named Jackie Rozo from his mother’s relationship with her former husband. Similarly, He has four half-siblings from his father’s previous relationship, Christopher, Katherine, Christina, and Patrick Schwarzenegger.

Joseph Baena Is an Aspiring Actor and Bodybuilder

After completing his degree from Pepperdine University, Arnold’s son according to his LinkedIn profile started working for ARIA properties as an Executive Assitant from October 2019 to April 2021. Similarly, he is working as a real estate agent for the same company from April 2021 to the present. The organization focuses on selling properties in Marina del Rey, Venice, and Santa Monica.

Apart from his career as a real estate agent, Joseph is also an aspiring actor. It seems he is following in the footsteps of his father. Mildred’s son has starred in a handful of movies and has a bright future ahead of himself.

His most notable works include Call of Duty: The Last Airshow, Bad to the Bone (2016), and Chariot. Similarly, he has appeared in multiple TV series including Entertainment Tonight (2016), Dish Nation (2021), and Access Hollywood.

Similarly, he also loves bodybuilding and has similar physic to his father. He loves lifting weights and is training in the same Gold’s gym his father used to train in. Likewise, he is also a fitness trainer who helps clients obtain the dream body they desire.

Joseph Baena Is Dating A Girlfriend

Yes, Joseph has a girlfriend named Nicky Dodaj. The two lovebirds have been in a relationship for quite some time now. They first met while studying at Pepperdine University and eventually began dating. They seem pretty happy with each other and love spending time with one another.

His girlfriend is the co-founder and creative director of Malibu Juice Club, which provides reasonably priced sportswear. The pair celebrated one year of togetherness back in 2020 with a post citing,

Similarly, they also celebrated Valentine’s Day together, and Dodaj a picture of them together saying,

“My valentine 2 years in a row. Back in our favorite place where it all started.”

The lovechild’s parents were having an affair while still being married at the time. His mom was married to her then-husband Rogelio Baena and his dad was in a marital relationship with his then-wife Maria Shriver. Mildred had been working as a housekeeper and Schwarzenegger’s secretary since the early 90s and is believed to be working there for over 20 years.

According to several sources when Maria Shriver went out for work Patricia would jump into the bed with Arnold wearing her belongings including jewelry. During their affair, she was pregnant with Joseph and at the same time, Maria was pregnant with her second son Christopher.

Further, the child was born; at first, everyone thought he was Mildred and her former hubby Rogelio’s son. However, time passed and he started to look more like the seven times Mr. Olympia, which made his former wife suspicious. She confronted both her partner and her housekeeper and with guilt both of them accepted the allegations which broke her heart.

Joseph’s stepmother filed for divorce from his father in July 2011. It was finalized on December 28. 2021.

Joseph Beana Shares a Great Bond With His Father

The father-son duo shares a great bond that seems to be unbreakable. Both of them share a lot of photos online having fun together. They pretty much do everything together whether it be exercising, going to a restaurant, or cycling the pair love spending a lot of time together. However, it wasn’t like this in the beginning.

Being raised by his mother he was nervous and didn’t want his dad to think badly of him. The rising star opened up about his relationship in the Unwaxed podcast saying,

Now the pair is as close as they can be and Joseph said he and his father joke about everything. Arnold has also expressed his love for Joseph wishing him a happy birthday and saying “Happy birthday, Joseph. Great student, and a great athlete. I’m proud of you and I love you!.”

A Short Bio of His Father: He is an Actor

Joseph’s father was born Arnold Alois Schwarzenegger on July 30, 1947, to Gustav Schwarzenegger and Aurelia. He began his bodybuilding career at a very early age. He started lifting at the age of 15 and won his first title of Mr. Universe at the age of 20. Later down the line, he won Mr. Olympia a total of seven times. Arnold is a significant figure in bodybuilding and to honor his achievement a separate bodybuilding competition named Arnold Classic has been held from 1989 to the present.

Similarly, with an exponential bodybuilding career, he is also famous for being an action hero. He has acted in several movies including The Terminator, Predator, The Running Man, The Expendables 2, and Escape Plan. Furthermore, Arnold has also gained a lot of accolades including a Golden Globe Award, Golden Camera Award, & Nickelodeon Kids Choice Awards.

The star kid is estimated to have a total net worth of $5 million. He has accumulated a fortune from his career as an actor, fitness trainer, and real estate agent.

Similarly, his father Arnold Schwarzenegger, on the other hand, is estimated to have a total net worth of $450 million. He has gained wealth from his career as an actor, businessman, & former bodybuilder.