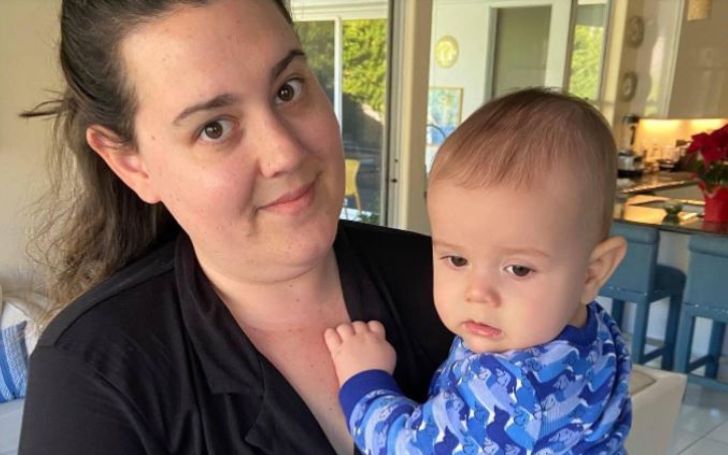 Katharine Luckinbill or Kate Conner is an ex-actress turned a hiring and recruiting specialist. She is better known as the daughter of Lucie Arnaz and the granddaughter of the late actress Lucille Ball from I Love Lucy. Luckinbill is one of Lucille Ball’s five grandchildren.

Kate’s grandparents Lucille and her ex-husband, Desi Arnaz were television’s first premier couple. The couple made audiences laugh throughout the 1950s on “I Love Lucy” and then the “Lucy and Desi Comedy Hour.”  Katharine, the third generation of the Ball and Arnaz family was also a performer in her own right. Though she left the profession with far fewer credits than her grandmother or her mother.

As an actress, Katharine is known for the films College Debts (2015), and Captain Incredible (2006).  She now is no longer in the acting business. Kate, however, has never forgotten that her show biz roots actually came from her famous grandparents. Luckinbill sometimes shares pictures of her lovely family on her Facebook page, and her legendary grandma is often present in some of the photos.

Know more about the daughter of Arnaz and Luckinbill in the article below; her childhood with her famous grandmother, her own acting career, her relationship, and more.

Lucie Arnaz’s only daughter, Katharine Luckinbill, full name, Katharine Desiree Luckinbill was born on January 11, 1985, in New York, NY. The now 37 years old is the youngest child of the actress and producer Lucie Arnaz and her husband, Laurence Luckinbill.

Kate graduated with a degree in theater from the University of Miami, Class of 2007.

How Katharine Luckinbill Got Into Acting?

Luckinbill thanks to her lineage had been seeing show business glamour for as long as she can remember. Katharine recalls falling asleep as an 8-year-old in her mother’s dressing room at the Richard Rogers Theatre. At the time her mother, Lucie Arnaz was appearing in “Lost in Yonkers” on Broadway.

However, to Luckinbill, her parents’ business seemed anything but glamorous.

She once in an interview said growing up in the showbiz world, she saw it in a very different way than other kid actors did. Katharine was 12 when she did a play with her mother and got her first official paycheck as an actor.

Luckinbill apparently saw what went on behind the scenes. Her parents had been very honest with her about what the business was like. The great things and the terrible things.

In light of that, Luckinbill had initially decided not to go into the family business. She, however, changed her mind at 16. She reportedly changed her decision after she started to get involved in her high school productions and was getting lead (roles).

At that point, her parents sat down and her mother told her if she really wanted to do this, she’d got to take it seriously. Luckinbill’s parents then sent her to a theater intensive, a place called Stage Door up in the Catskills. It apparently was a theater camp.

Katharine loved the experience, especially when she landed the role of Fräulein Kost in “Cabaret.”

Katharine Studied Drama At The University Of Miami

After theater camp, Luckinbill shunned Juilliard, Yale, and the other obvious choices in favor of the University of Miami. Halfway through her training at University, Katharine changed from musical performance to drama. After college, she moved to Manhattan and there she auditioned regularly for stage roles.

A year and a half to two years after college she kind of lost her way, and ended up going to L.A. but didn’t really fit in. She then returned to NY and after she got back, Katharine did a workshop on a new play but it did not go well.

Shortly after she’d come back to NY, she had also auditioned for Dracula but didn’t hear anything about it until almost exactly a year later. Katharine, however, at that point had left the acting business completely and was working as a preschool teacher.

Following the Dracula callback, Luckinbill decided to resume her acting career. She then played the role of Dracula on stage, and from that moment, she knew she had to be on stage. In an interview, Luckinbill said it was the first time she knew for sure that acting was what she had to do for her.

While she got plenty of theater gigs, on the big screen, Kate hardly got a success. She has only two credits in IMDB as an actress. Her first role was as a crack whore in the 2006 short movie, Captain Incredible, and as Zoe in the 2015 film, College Debts.

What Did Katharine Do After Acting?

Kate hasn’t been in any notable projects since the aforesaid two projects. When she sat up for an interview in April 2018, Luckinbill said she was not dreaming of superstardom as her career goal but rather just steady employment.

Later in Feb 2019, Katharine’s parents said she had once again decided to ditch acting and instead started to pursue a career in advertising. They said Kate had become a good writer, and the advertising business was where she had decided to apply her skill.

The parents went on to add that Katharine, who used to be an actress and singer, decided to pursue a career in advertising. They said Kate is a good writer, and the advertising business is where she decided to apply her skill.

What Is Katharine Luckinbill Doing Now?

After leaving the acting profession, Katharine became an administrative assistant/receptionist at Deutsch. She since has worked as a corporate employee for firms like Harpo Productions, JWT, 24 Seven Inc, Amazon, Aquent, Indigo Slate, Snap Inc, Microsoft, Desilu, Too, and others.

Kate is now hiring and recruiting specialists for the latter organization, also her mother’s company. She has been serving as the chief creative officer since July 2020.

Lucille Ball and Desi Arnaz when together produced two children, Lucie Arnaz, who was born while her parents were first developing their popular sitcom, and Desi Arnaz Jr., who was born the same night Lucy Ricardo gave birth to Little Rickey in a pre-taped “I Love Lucy” episode.

In March of 2021, Katharine appeared on Today to speak about her grandmother and the memories she still had from her early childhood of watching cartoons with her. Kate said she remembered all those moments despite she was only 4 years old when her grandmother Lucille Ball died in 1989.

Kate also reminded people that her grandparents produced “I Love Lucy” as a way of working together and keeping the marriage together with Desi Arnaz, although the pair ultimately ended up divorcing.

Katharine likewise mentioned her desire to continue carrying the torch of her grandma’s legacy. Kate also described the time when she and Lucille used to sit and watch ‘Inspector Gadget’ together and how the late Emmy winner would give her Oreos and milk.

Luckinbill then said she had also started sharing that routine with her own son. Luckinbill-Conner at the time was also launching a line of “I Love Lucy” products and experiences.

Who Is Katharine Luckinbill Married To?

Kate is currently married to Jeff Conner whom she wed in June 2016. The couple married in July 2016 with a huge aquarium as their background for the venue.

The nuptial also included an otter feeding event between the wedding and the dinner. The rehearsal dinner took place at a hip coffee house.

How Rich Was Katharine’s Grandmother; Is Her Mother, Lucie Arnaz Also Rich?

Kate’s grandmother was understandably rich during the time of her death with a net worth of $40million equal to about $80million in today’s money.

Luckinbill’s mother, Lucie, on the other hand, is also a millionaire, though, her wealth is quite significantly less than that of her late mother, Miss Ball. Arnaz is currently estimated to have a net worth of around $20million or so; mostly through the courtesy of her more than two dozen TV credits.

When Katharine was 17 years old, she got to be queen at the 75th Shenandoah Apple Blossom Festival. It was the very same Virginia festival that her grandmother had served as grand marshall for in 1964.

Percy Hynes White Picked Girls From Parties: Is He Removed From ‘Wednesday?