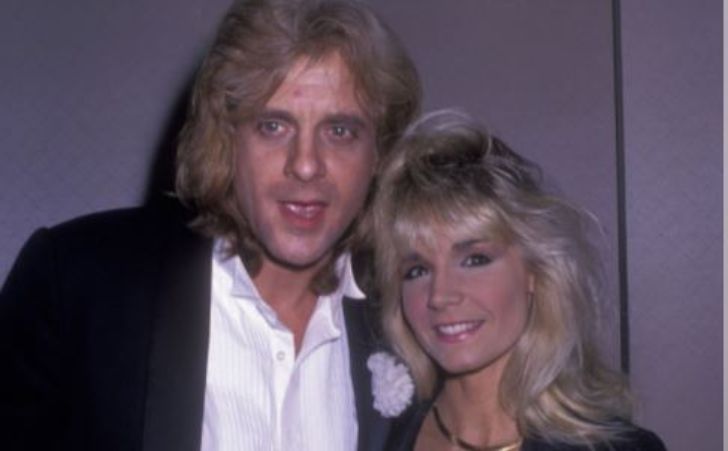 Laurie Money is a one-time reality TV actress, producer, tour manager, and most famously known as the wife of Eddie Money, fully, Edward Joseph Mahoney. Laurie’s husband, Eddie was a singer and songwriter who, in the 1970s and 1980s, had eleven Top 40 songs, including Baby Hold On, Two Tickets to Paradise, Think I’m in Love, & others.

Mr. and Ms. Money had been in a marital tie for a whopping 30 years until the former’s death in 2019. The New York-born rockstar seldom missed any off-the-stage actions with his wife, be it giving interviews, doing shows, or even hanging out with their five kids.

Know how Laurie and her husband started their relationship, how they managed to keep it together for so many years. Also read about the early chapters from the life of the Grammy nominee’s partner, her history, what was doing prior to meeting Eddie, and others.

Laurie Money Used To Be A Model

Before meeting Eddie, Laurie, born Laurie Dee Harris in May 1964, used to be a model.

In fact, Laurie is a former Miss One for the Sun. In 2018 while talking to Classic Rock Revisited, her late husband, Eddie said when he first met his wife, Laurie, she was then the reigning Miss One for the Sun, a beauty contest out of Nashville, Tennesee.

Later, she, however, would become a producer and actress for shows, Eddie Money: Heaven in the Back Seat (1991) and Real Money (2018). She was also on the booking jobs for her late husband’s bands and the shows he would perform.

Laurey and the Baby Hold On singer, Eddie Money married in June 1989. They met in 1985 in Nashville. Eddie, who was formerly married to Margo Lee Walker, was 15 years older than Laurie.

As mentioned, when the mother of five met the star of the documentary, Wonderland, she at the time had been working as a model. Of her first meeting, Laurie once in an interview said,

“I really didn’t know who he was. I used to get him mixed up with John Mellencamp.”

On the other hand, while talking to People magazine in 1996, the late Mr. Money told meeting his wife in 1985 inspired him to get sober.

He often credited her with helping him get sober. Before he met his second wife, his life was a rock star’s stereotype with girls, wrecking a lot of cars and a lot of alcohol and cocaine.

In an interview with People, his partner said how the California-based musician had been wanting to have children to which she said she would agree but only if he were to stop doing what he was doing.

“Otherwise, I wouldn’t have stayed,”

The Reason Behind Laurie And Eddie’s Long Marriage

In an April 2018 interview with the San Jose Mercury News, when the questioner asked Money about his secret to a long last marriage with his wife, Laurie, the singer replied,

“You have to listen to your wife and realize that she really wants to be treated like an equal.”

Eddie also stated how their family had no real boss except Laurie, herself.

They Though Had Briefly Separated

Despite the overall longevity of their marriage, the Love and Money singer, in May 2018, admitted to the Herald-Palladium he and his wife split for two and a half years.

Money said he one time broke up with his wife and was living at the Motel 6 for a while. Eddie though added during those times he also ended up writing some really good songs. Laurie, on the other hand, says it was the best two and a half years of her life.

Laurie Money Relationship With Eddie Was Not Normal

Although they managed to avoid a solid fallout in their 30-year long marriage, Mahoney once stated his and Laurie’s togetherness had been “very volatile.”

Money, in one of his interviews, said how his wife never wanted to talk about his past with drugs or with other women. The former cocaine addict reported Laurie had also forbade him from going on Howard Stern’s radio show.

Eddie added how a marital life with him was never easy for the mother of his children. Apparently, the ex-pageant winner also hated his past and his fans.

Laurie Had Five Kids With Her Late Husband, Eddie Money

Together, the couple had five children together, Zachary, Jessica, Joseph, Julian, and Desmond.

Eddie and Laurie’s five children each have a hand in the music industry; their daughter, Jesse, and sons Desmond and Julian, all had joined their father on stage as members of his band.

Jessica, sometimes called Jesse Money would sing backup vocals for her father. Desmond is also a singer-songwriter and frontman in his own band. He additionally has his brother Julian on drums and sister Jesse on background vocals.

Laurie and Ed’s other son, Joseph is in a different music genre as a dubstep producer. The Money couple’s eldest child, Zach, on the other hand, helps to run the family business, reports AXS TV. Zach, the eldest specializes in fitness and was Eddie’s personal trainer. He now is more on the analytical side to maintain the family business.

She And Her Husband Were On The Reality Show

When Laurie Money’s husband was still alive, the Money family had also started their own reality show, named Real Money on the network, AXS TV.

Laurie is one of the producers of the show, the role which her late husband was also serving until his death in 2019. The show originally aired on AXS TV in 2018 and ended the following year.

Her husband of over three decades, singer Eddie Money died on September 13 at the age of 70. Eddie Money had publicly revealed his stage 4 esophageal cancer diagnosis in Aug 2019.

Prior to that, Laurie had always been on his side. The one time West Lake Village resident while announcing the news to his fans said he and his wife had jointly found out of his stage 4 tumor that was in his liver and lymph nodes and a little bit in his stomach.

After the death, the Money family later cremated their patriarch in Los Angeles County.  A year later, Edward’s family filed a lawsuit alleging wrongful death against the hospital, with an additional allegation of medical malpractice. Though the story is yet to get any new development.

While her rockstar husband, Eddie Money had a net worth of over $20 million at the time of his death in 2019, it is unclear what portion of that sum went to his wife of 30 plus years.

What’s more, the Money family is yet to reveal the terms of his Will. Though, in any case, the personal fortune of the deceased cancer victim’s wife must have experienced a significant boost in spite of the sorrow that she endured.

Worth mentioning is she also has the potential of taking in continuous cash from the rights to her deceased husband’s music catalog. Though what’s in the mist is the knowledge of how much Laurie owns to her net worth.

What Is Laurie Money Doing In Present?

Although Laurie was fairly active on the socials until 2018, the second wife of the occasional TV actor in recent times hasn’t shared anything from her side.

While she may be suffering less since the death of her partner, the Infos with respect to her current pursuits are a bit hard to come by. Her last notable mention over social media was by her daughter, Jesse in May 2021, on the occasion of her birthday. Later the same year, she has also appeared for an interview with Kiki Classic Rock.

As per reports, the mom of five is now busy with continuing the legacy of her late spouse, helping her children to redo the verses of their father.

In 1999, the San Francisco Chronicle referred to Laurie as a “Pamela Anderson look-alike.”