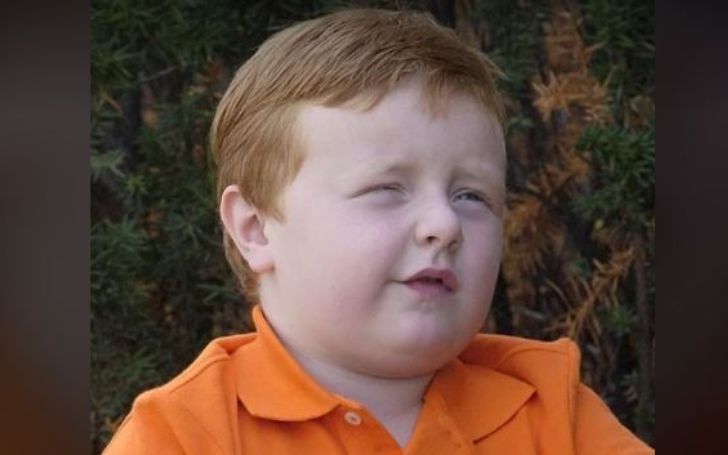 Noah Ritter is a former internet icon who is known better as that ‘apparently kid.’ He rose to prominence after random footage of him, where he says the word ‘apparently’ multiple times, got millions of views within a matter of weeks.

With a scene-stealing live interview on a local television station, Ritter’s in a way became an accidental star. En route to stardom, the viral kid has appeared on several landmark talk shows like The Toy Box.

While it’s been over five years since he stepped into the realm of internet fame, he is time and again still adored by many. Take a look back at the moments right after he became the talk of the nation, his afterward life, what is he doing now, and more.

While Ritter’s parents are yet to fully disclose details regarding their son’s birth, the former red-head funny little man presumably was born around the year, 2008.

As such he was five amidst his faithful encounter with TV Journalist Sofia Ojeda in Aug 2014. His full name is Noah Deck Ritter.

Noah apparently is the only child of his parents. This confirmation came from his grandfather, Jack himself, the very month Ritter caught the internet by storm. He apparently is also a child of his divorced parents. His mother, at the time of his rise to media, was dating some other guy.

Noah Ritter originally is from Pottstown, Pennsylvania. Talking about his education, he attended kindergarten in Pennsylvania and is now may be in school.

The date was Aug 1st, 2014. The then-precocious five-year-old Noah had just attended the Pennsylvania County fair with his grandfather, Jack Borowski. He was living with his grandparents in Wilkes-Barre, a city in Pennsylvania and the county seat of Luzerne County.

One of the WNEP news crews from Newswatch 16 reporter Sofia Ojeda stopped to ask a few questions about the trip to the Wayne County Fair in Honesdale, Pennsylvania, to Noah on camera.

Ojeda asked Ritter, the grandson of Kathy and Jack about the ride he had just ridden on. Noah who was then with his grandfather, Jack Borowski, in the blink of an eye took over the mic and started uttering,

“Well, it was great because apparently, you’re spinning around, and apparently every time you get dizzy, that’s all you do is get dizzy,” Noah said of the ride. he then added,

“It was great and apparently I’ve never been on live television but apparently sometimes I don’t watch the news because I’m a kid and apparently every time Grandpa just gives me the remote I have to watch the Powerball.”

Ritter also talked about watching Powerball drawings with his grandpa and being “scared half to death” while riding a slide at the fair.

During the rest of the talking, the toddler littered the word “apparently” no less than eight times. The interview itself was for only one and a half minutes.

The answer from the Pennsylvania native was hilarious as it could get.

Noah Ritter: The Rise To Fame

Shortly after, the interview went viral, and almost everyone ascribed to him as a born-to-be pro at reporting.

After that, the word “apparently” was never the same again at least for the rest of that year. The video first got thousands of views, and by the end of the month had received over 14 million times on YouTube.

Also on August 4th, Twitter user treyschmaltz introduced the hashtag #ApparentlyKid. Within 48 hours the hashtag was tweeted out over 1,000 times.

“We were watching it on the computer and it replayed on the local news. He’s going, ‘That’s me. I’m a celebrity. I think he’s enjoying it.”

His granddad, Bowrowski later told ABC News that his grandson was spending the summer with him in Wilkes Barre. Jack also disclosed his grandson, Noah is pretty talkative and has a large vocabulary.

While Noah appeared to have a knack for being in front of the camera, his grandfather said his true loves, however, are dinosaurs and swimming.

His grandfather revealed they go down to the history museum in Philadelphia about once a month because Noah had always loved dinosaurs since he was an infant.

Ritter On The Ellen DeGeneres Show

Noah and his grandfather thereafter went on to receive calls from a number of television networks and talent agents. The famous ones are Good Morning America and The Ellen DeGeneres Show.

Not long after he became an internet sensation and got the title ‘apparently kid,’ Noah went on to appear on the Ellen show and gained even more stardom.  In fact, so far he has made several appearances on NBC’s variety comedy talk show.

He first came to the show in Sep 2014. Ironically though Noah at the time refused to repeat his signature phrase in front of Ellen. When the host, DeGeneres asked whether ‘apparently’ was his favorite word he said, steadfastly stuck to his guns.

Also while giving an interview on Good Morning America, he said he was tired of saying the word ‘apparently.’  He admitted he then didn’t know how to spell ‘it’ nor had any idea what it meant.

When asked where he’d learned the word “apparently,” he responded saying, “I don’t know, from my mom, maybe?”

Talking about his newfound fame, Noah said “great,” because he’s “never had any people like him.”

Ever since that first starring on the talk show, Ellen and her fans haven’t gotten enough of Ritter. He in fact has built a strong rapport with DeGeneres PA “Robbie” over the last few years.

During one of his visits to Ellen, Ritter also got to interview Modern Family’s, Sofia Vergara.

On the first interview, she had surprised the kid with a VIP trip to a show to see his favorite creatures: dinosaurs at the set of “Walking with Dinosaurs” at the Staples Center in Los Angeles. The following year, DeGeneres also gifted Ritter a visit to the State Fair of Texas.

Then in May 2015, Ellen DeGeneres tested the ever-popular 6-year-old Noah Ritter and Jurassic World star Chris Pratt’s knowledge of dinosaurs.

In the video, Ellen and her production assistant Robbie Dickinson hosted the trivia game between Pratt vs the dinosaur enthusiast.

He Became A Judge On A Kids Show

For Noah, the ‘apparently interview’ and subsequent fame from being on a talk show was just the beginning. There was more yet to come. As if the title ‘apparently kid’ wasn’t enough, in April 2017, Ritter also got his own TV show, The Toy Box.

On the Toy Box, participants pitched their ideas for new toys to a panel of industry experts. The catch, however, was the contestants also had to pitch their toy ideas to a panel of child judges as well. Ritter was one of the judges that appear on the show, adding his humor and charm.

While he was only eight years old when he got to host his own show, Noah knew a thing or two about what makes a good toy.

He hopped into the show with the principle that a toy had to be fun for kids everywhere. And it shouldn’t require too much work for parents to set up.

The WNEP show went on to become popular. It even received a second season but the network later canceled the series after the end of season 2.

Some Other Good Things That Have Happened To Noah Ritter

Even after the cancellation of The Toy Box, Ritter’s fame didn’t stop to slow down. Since his introduction to the media, he has had a handmade action figure of himself on Etsy and on several likewise platforms.

In Sep 2014, the same year of his interview at the County Fair, Ritter had also gotten to star in a commercial for Freshpet, a company that sells all-natural pet food and treats. Add to that, his first video clip additionally received the Songify treatment by internet comics the Gregory Brothers.

In Aug 2021, six years after the primal incident, the very video also got a pitch-perfect soundtrack titled, The Apparently Kid — the Mini Musical.

What’s more, insiders and several sources have it, Noah also gained a lot, financially, for a kid of his age. The figures though never got out. Some, however, suggest his net worth post the interview had hit and crossed the threshold of hundreds of thousands of dollars.

What Is Noah Ritter Doing Now?

The early days of Ritter’s notability from that interview have certainly lost some gravity. He, nonetheless, as of the present is acting as a part-time YouTuber and part-time adolescent who just wants to enjoy his life.

Through his Youtube channel, The Apparently Kid, Ritter often shares movie reviews, his activities with his grandpa, Jack, some mini vlogs, and so forth.

Who Is India Westbrooks? Her Bio, Career, Boyfriend, Net Worth

Who is Veronica Perasso? Her Instagram, Tiktok and more