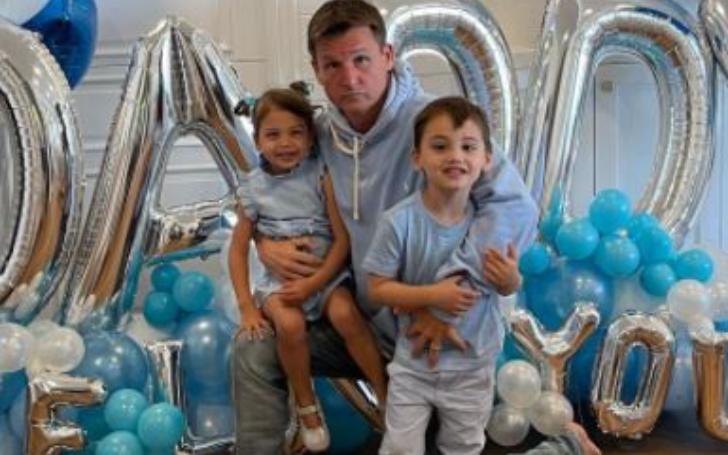 Kodah Dash Dyrdek is an American star kid who is the son of Rob Dyrdek and his wife, Bryiana Noelle Flores. He is the oldest child between the couple who has been married since 2015.

Besides, Kodah’s father is one of the most influential skateboarders of all time. Further, Rob is also famous for hosting the show, Ridiculousness. He also appeared in the reality show, Rob & Big.

That being said, we’re here today to talk more about Robert’s son Kodah Dash Dyrdek so let’s get right into it!

He was born on September 9th, 2016 in Los Angeles, California. The first child between Rob and Bryiana, he belongs to a mixed ethnic group. His father is a Caucasian, his mom is a mixture of Filipino, Chinese, Cherokee, Caucasian, Spanish, and Blackfoot. Kodah has American nationality.

Initially, the couple announced they were expecting their first child in March of 2016 via their Instagram account. In the post, not only did they reveal they were pregnant, but they also revealed the gender of their child.

What is the meaning behind Kodah’s unique name?

We’re sure many of you might be curious to know the real meaning behind his name. Well, to say the least, his name doesn’t really mean anything specific, still, we can somehow trace its origin to music.

According to SheKnows, his first name Kodah can be linked to the musical term, Coda which translates to the end section of a music piece that is distinct from the rest of the song. Moreover, the name is so unique that it came No. 5256 in U.S. baby names for boys in 2015. Safe to say, when Kodah will grow up, he will notice there’s not a whole lot of people who share the same name as him.

As for his middle name Dash, well, it’s a different story. First of all the name traces its origin in the Russian name, Dasha. It means ‘a gift from God.’ To be fair, Kodah is indeed a gift from God for his mom and dad.

Aside from his unique name, he has several cool nicknames as well. You can call him, Dash, KD, K-Dash, Dah-Da.

Rob and Bryiana became a parent for the second time in 2017. They welcomed their second child and only daughter, Nala Ryan Dyrdek on December 29, 2017. Talking about her beautiful name, it comes from the Arabic word, Nahla. It means the first drink of water or water in the desert.

After the birth of their second child and that too a daughter, it seems the Dyrdek family is now complete. Having said that, we can’t be sure what lies ahead in the future.

Besides, the new mom and dad are savoring each and every moment of their kids’ childhood. After all, kids grow up so fast. We’re sure Rob and Bryiana are exceptional as parents and there’s no doubt Kodah and Nala are being raised in a loving environment.

Kodah is enjoying life as a star kid

It’s natural when you are born into a family of stars, you have almost everything in your grasp. And when your parents are as rich as the great Rob Dyrdek himself then everything is done in a stupendous manner.

Likewise, Kodah and his baby sister Nala are enjoying their life. Though they are still kids, they have been to many exotic places that many of us even dream of. Further, when there’s a special occasion in the household, their parents make sure to celebrate it in the grandest way possible.

For his first birthday, his parents threw him a big circus-themed party. Both the father and son duo wore the same circus-inspired outfit. In an Instagram photo that Rob posted, he jokingly wrote, “Can’t believe a year has gone by so quickly. We love you so much. One day you will appreciate your dad in his circus themed vest matching your circus themed party.”

Kodah Dash Dyrdek Parent’s Relationship: How it all began?

It was back in 2013 when Bryiana and Rob first came across one another. They met at an event and were instantly smitten by each other. From the beginning, they had an instant bond and soon they exchanged numbers.

As we stated earlier, Rob always does stuff in an over-the-top manner. For their first date, he flew his future wife in a helicopter and headed towards Bakersfield to rescue puppies. It was during their first flight that the retired skateboarder knew she was the one.

But the engagement proposal set the bar even higher. Yes, ladies and gentlemen, Rob proposed to his girlfriend in the grandest way possible. So the duo decided to go to Disneyland and watch the Alladin theatrical. Then out of the blue Rob vanishes from his seat only to appear on the stage whilst riding an elephant. Then Genie asked him what his three wishes were, his first wish was to be a part of the show, the second was to invite his girlfriend on the stage, and for the third wish, he asked Noelle if she will marry him.

Some times after their over-the-top engagement, they tied the knot on 19th September 2015. The lovebirds also decided they will renew their wedding vows every five years. Their fifth anniversary came in the middle of the Covid-19 pandemic in 2020. Despite all the odds they renewed their vows in a small ceremony.

His dad Rob is worth a whopping $100 million. He garnered such a huge amount thanks to his career in showbiz and his multiple investments here and there. He owns three houses all in Los Angeles. In 2015 he bought a 3.1-acre land for $9.9 million, then in 2018, he became the owner of 6800-square feet home.

In 2020, he purchased a huge house in the same neighborhood as his previous two investments for $8.5 million.

Meanwhile, Kodah’s mother has a net worth of $1 million. She earned her money from her career as an entrepreneur and a model. Currently, she is the president of the Iconic Beauty lineup.