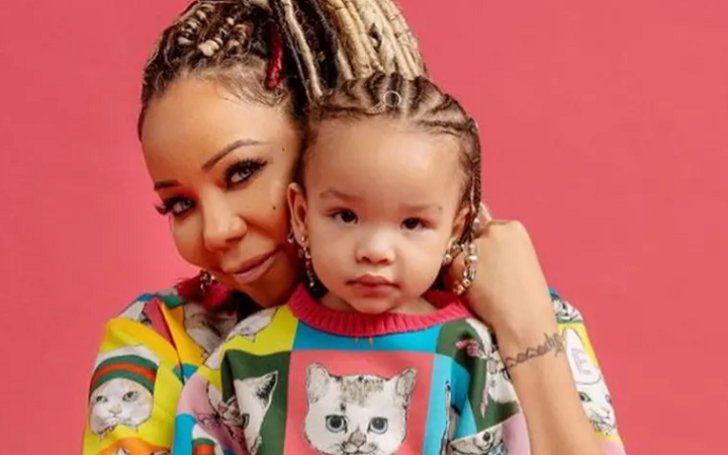 Leyah Amore Harris was the stillborn baby girl of rapper T.I. and a singer-songwriter, Tameka Cottle. Although it’s been over a decade since Leyah died, there has still been some curiosity for the cause of her death.

Both of Harris’ parents were shattered by the dreadful incident. After the tragic incident, her mom Tameka found herself “very upset and depressed for a while.”

Leyah Amore Harris was Stillborn-What Was the Cause of Her Death?

T.I. and Cottle became the parents for the first time when their son Clifford “King” Harris III was born in August 2004. After three years, the duo announced they were expecting their second child, a baby girl. Unfortunately, the pregnancy ended in tragedy.

In an exclusive interview with Essence Magazine, the singer opened up regarding pregnancy struggles. She said that the sac that held her baby girl was split in two and they had not combined since the girl growing inside her turned 16-week.

The Grammy Award-winning artist added that the baby was “positioned in the middle of those two sacs.” Further, doctors told her the fetus “could get tied up in her umbilical cord.”

Although the doctor warned Cottle several times, the singer never thought of losing the baby. Six months after she conceived the baby, Cottle visited the specialist which ended in a devastating outcome. She said,

“When I went to see the specialist, that’s when they determined there was no heartbeat.”

After the baby’s demise, the heartbroken mother couldn’t leave the hospital without taking the baby girl.

The singer told the magazine,

“She was 6 months old and I named her Lelah Amore. I keep her belongings near me — pictures and roses [from the burial]. It was very deep. Here I am, in the hospital to have a baby, deliver it, but I’m going to go home with no baby. After Lelah was born, I kept her in the room with me the whole day. They placed her in the little basket and we dressed her in an outfit and had a blanket wrapped around her. They came and got her because her body went cold and I wanted her back so they warmed her body again and I kept her. People might think that’s crazy, but I just needed to be with her.”

The family of Leyah organized a beautiful funeral service for their late baby girl. It was attended by their family members and a few other people.

Besides, Cottle admitted that she sporadically visits graveside because it’s “too sad,” but she visits on “holidays and special days.”

How Leyah’s Death Took an Unexpected Turn on Her Parents’ Relationship?

After losing the child very early, Cottle found herself “very upset and depressed for a while.” The tragedy, however, had a silver lining as it brought Leyah’s parents closer and led them to engage for the second time. Cottle explained,

“It definitely brought us closer in our relationship. I kept a lot of company around me to help me keep my mind off of it, so I wouldn’t be so sad.”

T.I. and Cottle began dating back in 2001. The two dated for around nine years before they tied the knot on 30th July 2010. Their wedding ceremony was organized in Miami Beach, Florida.

Despite they spent around a decade as boyfriend-and-girlfriend, they couldn’t do the same as a married couple. After around six years into their marriage, Tiny filed for divorce from her husband T.I in Late 2016. Source says the duo is now working on a reconciliation.

Talking about their children, they are blessed with seven children. They welcomed their first child, a son King in 2004. They became parents for the second time when their son Major was born in May 2008.

Furthermore, in March 2016, their daughter, Heiress Harris was born. As a matter of fact, T.I. and Tiny had announced the pregnancy on Christmas Day 2015.

Besides, T.I has three children from his previous relationship; two sons Messiah and Domani with his ex-girlfriend Lashon Thompson and a daughter, Deyjah with rapper Ms. Niko.

Sadly, the family suffered another terrible loss when T.I lost his older sister Precious Harris in a horrible car accident. She was 66 at the time of her death.

Born and raised in College Park, Georgia, Cottle is a singer and songwriter. She made a breakthrough as a crucial member of the R&B vocal group Xscape. She worked on three platinum albums of the band including Hummin’ Comin’ at ‘Cha, Traces of My Lipstick, and Off the Hook.

The artist also won a Grammy Award for writing the hit TLC single ‘No Scrubs.’