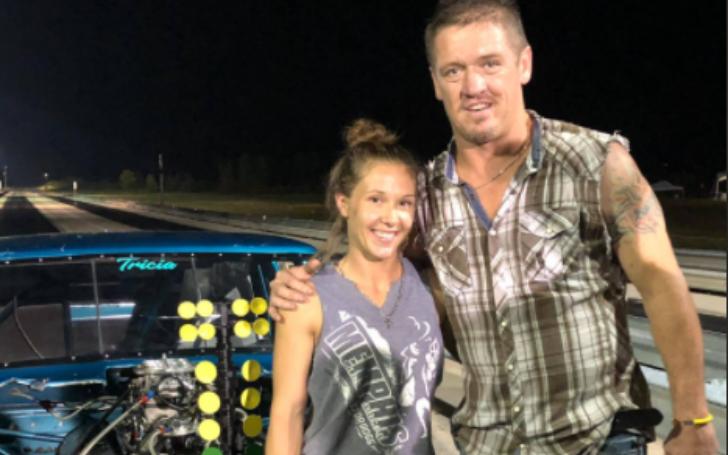 Tricia Day is known among the fans as JJ Da Boss’s wife as well as the ‘Midget.’ Just like her hubby, Tricia is also an avid car racer. It wouldn’t be an understatement to say that Tricia’s apperance really adds to the show, Street Outlaws Memphis’ popularity.

Similarly, behind the big screen, Tricia enjoys a terrific marital bliss with her husband. The duo is a parent of four beautiful children.

Let’s take a look at her life and know all the interesting facts about her!

Who is Tricia Day? About her Parents and Siblings

She was born Tricia Ann Wench in Bassett, Arkansas, the United States. She is the daughter of Terry Welch. Information about her biological mom is not known however her step-mother is Jody Welch, whom her dad married.

She has one half-sister, Emily Lacy. The celebrity spouse loves keeping her personal life behind closed doors.

As of 2020, Tricia is in her 30s and lives a happy life with her spouse and children. The mother of four children spent her entire childhood moving around in small cities in Arkansas before settling down in Tennessee for good.

Tricia Day married to JJ Da Boss: When was their wedding?

When the Discovery series, Street Outlaws Memphis first aired in January 2018, Tricia was introduced as JJ’s wife and a fellow street racer as well. Since the beginning of the show, neither JJ nor his beautiful lover disclosed as to when did they tied the knot.

Having said that many of you might not know that Tricia and JJ grew up in a same town outside of Memphis. Moreover, Tricia’s step-mom Judy once shared a picture of her step-daughter wearing a wedding dress back in 2012. It is highly possible that Tricia and JJ married somewhere around the time.

Besides, in an interview with Monster and Critics in February 2018, JJ revealed, he has been together with Tricia for about 10-years. The timeline all adds up. To be precise, the duo might’ve started dating in 2009 and got married in 2012. These is hypothetical btw.

Be that as it may, we are certain they are in a marital relationship. We as fans, are happy they found each other. After all, it is Tricia who pushes JJ Da Boss to work hard every day and entertain us fans. We are glad you exist, Tricia!

What is the age difference between Tricia Day and her husband JJ Da Boss?

The age gap between JJ Da Boss and his wife Tricia has been one the most talked about ever since she appeared in Street Outlaws Memphis. While JJ who was born on August 10th, 1973, is 47-years-old, his wife Tricia was born on December 6th, is in her 30s. Despite all that, she looks drastically younger than her spouse.

Now there can be two assumptions about this, either her skincare routine is unbelievably good or she is just young. Off these two options, our research concludes Tricia is really young. At the very least, she and her husband has an age gap of 10-years.

The pair shares four children between them: She is a grand-mother as well

From their relationship, the duo is a proud parent of four beautiful kids. They have three daughters, Vada, Aubrey, Annaline, and one son, Jonathan Wayne Jr.

The duo, despite their busy schedule, is always there for the kids. JJ tries to spend as much time as possible with his children. Though Tricia is not available in any social media profile, her husband frequently shares pictures of his family on Instagram.

Aside from four children, Tricia is a step-mother to her spouse’ seven kids from his previous relationship. The identity of the mother of JJ’s seven kids is not known yet.

Out of the seven, many of you are already familiar with Josh Day aka Doughboy. He is also a street racer just like his father. Apart from him, JJ also has a daughter named Whitney from his past affair. The name of the other five children is unknown.

From her step-son Doughboy, Tricia is also a grandmother to two beautiful children. Dough is married to Chelsea and they have two bundles of joys, Kamden, and Novaleigh.

Tricia Day aka Midget: Her husband taught her street racing

It wouldn’t be an understatement to say that Tricia is literally the heart of the show. When she appears on the show, everyone calls her by the moniker, Midget, a nod to her petite frame.

JJ Da Boss was the one who first introduced his wife to street racing. In the same interview with Monster and Critics, Tricia stated, “[JJ] asked me one day if I wanted to try it. I raced and it’s been a journey ever since.”

At the beginning of her street racecourse, Tricia caused a lot of damage, as stated by JJ. However, in the end, it didn’t matter as she brought an immense amount of joy in his life.

Tricia and racer Precious Cooper grew up together

If you have been following Outlaws Memphis since its inception, then surely you can’t miss the chemistry between Midget and Precious. Well as it turns out, both of them are childhood friends. No wonder they click.

In addition, Precious is not only a best friend but the godmother to her four kids well.

Tricia’s hubby JJ also has a great relationship with Precious. “She helps take care of all of my bills. She helps me as much as I help her. It’s just kind of neutral respect. Nothing crazy.”

How much is Tricia Day net worth?

There is no doubt that Tricia and JJ Da Boss live a rather simple life. Although they earn a substantial amount of money from their work in the Discovery series, it is still far fetched to say they are multi-millionaires.