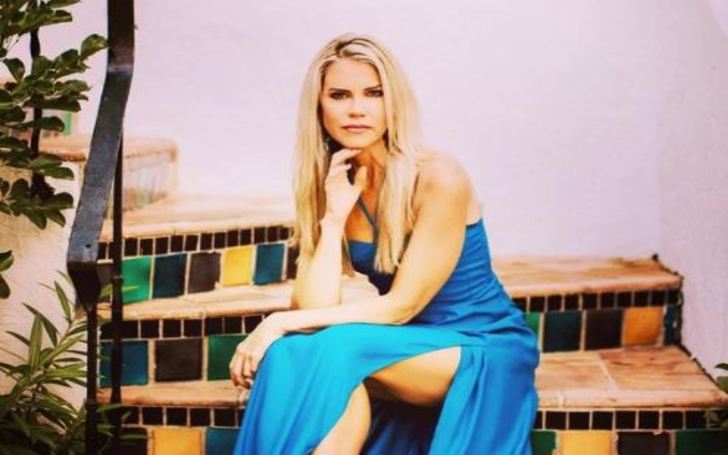 Faith Majors (originally, Faith Noelle Cross) is an actress known for Corruption.Gov (2010), TV: The Movie (2006), and Me & Lee?  She is also famous as the wife of The Six Million Dollar Man actor, Lee Majors.

Besides some appearances on few films, Majors hasn’t had that many notable attributes to her name or at least that the general tabloids know of. She, however, almost always steal the show when she walks by the side of her husband; be it the red carpets, events, or the premieres.

Know way more about the life of Faith Majors; especially in regards to her identity before knowing her boyfriend-turned-husband Lee Majors. Whilst doing so also read every specific with respect to her relationship with her now longtime partner.

Faith Majors Was Raised By A Singel Mother

Faith was born on September 6, 1974, in Florida. She was raised by a single mother and grew up with three sisters. Times were tough growing up for Ms. Majors.

Her mom would work two to three jobs just to put food on the tables. Much like her mother-in-law (Lee’s mother), Faith’s sister also lost her life in a car accident. At 16, she would also lose her mother.

In 2006, Faith Majors played Ms. Jones in Steve-O’s comedy/parody film, National Lampoon’s TV: The Movie. The film also includes her husband, Lee Majors as one of its casts. A year later in 2007, Faith portrayed herself in director, Paul Dinello’s Me and Lee.

She appeared as Lucinda Lawrence in the 2010 Q Manning and John Sjogren’s film Corruption. Gov.

Faith Majors Has 35 Years Of Age Difference With Her Husband, Lee Majors

Noelle married her husband Lee Majors on November 1, 2002.  The couple has an age difference of 35 years. They, though have been together for more than 23 years. Both of them share a strong Christian belief.

Prior to marrying Faith, Lee had walked down the aisle thrice. He was husband to Charlie’s Angles actress, Farrah Fawcett from 1973 until 1982. Before that, there he was married to Kathy Robinson from 1961 until 1964. He was also in a marital relationship with Playboy Playmate model Karen Velez, from 1988 until 1994.

Where Did Faith Majors And Lee Majors Meet?

Faith met Majors at a dinner party in Florida in December 1994. Lee initially sent someone to get her number. He then took her out on their first date to the 1995 Super Bowl.

Majors revealed he asked Faith to marry him at a Super Bowl party. The father of four explained how they were watching the game at a friend’s house and he handed her a little ceramic football that had a hinge on it.

The then blonde girlfriend of Majors opened it and inside was a 7 1/2 carat marquis diamond in the shape of a football.

Faith Majors And Lee Majors Had A Mediterranean Wedding

The actor couple had a rather secret wedding with only two attendees at a quaint hotel overlooking the Mediterranean Sea. The Fall Guy star was in his early ’60s while his bride was 28. The ceremony took place at the Il San Pietro Hotel in Positano, Italy, on the spectacular Amalfi Coast.

It was their friends who had been going to Italy that suggested the venue. The pair reasoned they chose the location in a different continent because their families were scattered all over the United States.

The Six Million Dollar Man sported a black Valentino tuxedo with a white bow tie. Faith wore a $5,000 platinum-colored gown by Badgley Mischka. The mayor of Positano officiated the nuptials which had Lee’s friend Terry Kiser – who played Bernie in the “Weekend at Bernie’s” as the best man. Incidentally, Braveheart actor Mel Gibson was also at the same hotel.

Post the wedding Faith and her husband stayed in Positano for 10 days, shopping, sightseeing, and enjoying quiet romantic dinners.

Years later, in April 2008, Faith and her husband renewed their wedding vows at Waialae Beach Park in Honolulu.

Lee with National Enquirer revealed that his and his wife’s big day nearly never came off thanks to the paperwork involved.

The actor explained how he and Faith tried to do some paperwork beforehand in Las Vegas, where they were living at the time but just couldn’t do that. They then had to fly into Los Angeles several times and see the Italian Consulate there but to no avail. Lee said he had to get everything – birth certificates, passports, divorce documents – then translate them to Italian.

The newlyweds to be had to go through the same rigmarole all over again when they landed in Italy.

Then in Milan Faith and her husband had to go to the U.S. Consulate’s office but were told their paperwork might not be legal because “the Northern District may not recognize the Southern District.”

The Big Valley star said even after the wedding they weren’t 100 percent sure till they got that certificate in their hands from the mayor of Positano.

Where Do Faith And Her Husband Live?

Faith and her husband of more than 18 years — live in Huston, Texas. Noelle says Charlie Thomas of the Houston Rockets, a close friend of her husband was the reason that the couple chose Houston for settling after leaving Los Angeles. The men shared a 30-year friendship before the demise of Thomas in January 2021.

The five-foot-four inches tall Faith and her six-foot-tall actor husband do not have any children.

Lee’s spouse, Faith is a longtime friend of the British actress, Jeanine Nerissa Sothcott. The ladies along with each of their husbands have often gone on a double date.

Cross’ friend, Sothcott is an actress and executive, known for Nemesis (2021), Aura (2018), and Renegades (2022). She is also the wife of a British film producer and author, Jonathan Sothcott.

What Is Faith’s Net Worth?

Faith Majors net worth is rather a subject of he says, she says thanks to the secrecy surrounding her professional endeavors.

In any case, Faith very much could be enjoying the lifestyle no less than a millionaire considering all her activities on socials. Not to mention, she is also the CEO of her spouse’s Majors Production Company.

If nothing then Cross’ beachy and exotic vacations could to an extent attest that the 47-year-old is living quite an eased life in terms of finances.

Also, we cannot forget Lee Majors’ net worth of around $15million when discussing Faith’s financial details.

She Also Does Charities With Her Husband

Since meeting her husband, Faith Majors has been working on a path of philanthropy, choosing to quietly support organizations important to her and her husband. Throughout their relationship, the couple has advocated and raised funds for various charities. In 2016, they were honored during the 12th annual St. Christopher’s Inn Board of Directors dinner in April for the way faith and spirituality have helped them throughout their lives.

Some Other Facts About Faith Majors