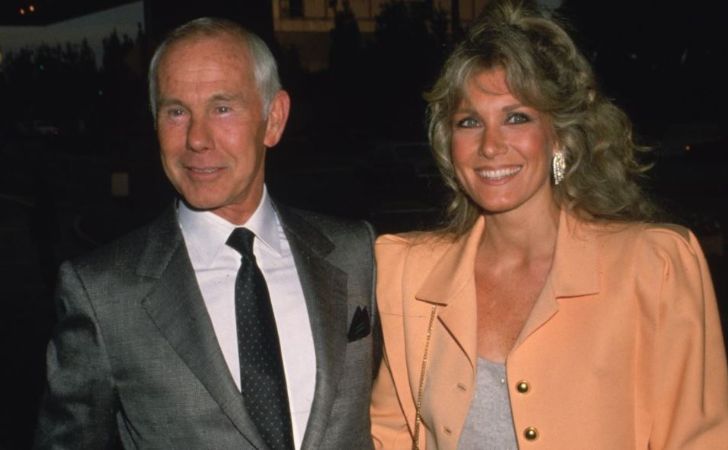 Alexis Maas is one of the few celebrity wives who are famous even years after the death of their spouse. She is the fourth wife of the late TV presenter and talk show host Johnny Carson. It has been over 15 years since the death of Carson, but Alexis has still maintained immense fame and reputation in the media.

Well, how has her life been since the death of her spouse? Did she have any children? Where is Alexis Maas at present? In this article, we are going to talk in detail about her career, earnings, relationship, and a lot of other interesting facts.

Born in Pittsburgh, she spent most of her early days in her hometown along with her parents. Unfortunately, she has not revealed much about her parents.

Like we stated, Maas gathered fame only after she walked down the aisle with her husband Johnny. Alexis and her late husband Johnny married on June 20, 1987, at his Malibu beach house.

Their wedding ceremony was officiated by the Superior Court Judge William P. They kept their wedding very private as they did not want much publicity. Carson’s brother Dick was the best man at the ceremony. Regarding their decision to keep their marriage very private, a close source said,

“Johnny is a very private man and didn`t want any publicity attached to the wedding. They left for England over the weekend.”

Post their wedding, the couple went to Mediterranean countries for their honeymoon, where Carson reportedly spent a large sum of money. If reports are to be believed, the couple spent a reported $6.5 million during their honeymoon trip.

The couple’s decision to tie the knot was not an instantaneous decision. Shortly after divorcing his third wife in 1985, Carson and Alexis began dating. They dated for two years before finally walking down the aisle.

However, as fate had it, Alexis’ marriage with Carson ended with his death on 23rd January 2005 because of respiratory failure.

Not all marriages last when a massive age gap is in play. But in the case of Alexis and Johnny, things worked out pretty well. At the time of their marriage, Alexis was just a 35 years old lady whereas Johnny was already 61 years old.

In fact, their age gap even ignited several controversies in the media. But despite all odds, the couple maintained a sound relationship for over 2 decades. Unfortunately, their marriage ended with the death of Carson in 2005.

She Lived a Magnificant Life With Her Late Husband

Not everyone is fortunate to live a life Alexis enjoyed. As the wife of a successful TV personality, she enjoyed her life to the fullest. As an award-winning TV personality, Johnny also owned massive properties including a 16-bedroom mansion on four acres on the oceanfront in Malibu.

Likewise, he also owned a 14,000 square-foot palazzo in Beverly Hills. Well, as his wife, Alexis shared her time at his different properties. Besides, they also went on exotic vacations and attended the most high-profile events. They were spotted at the opening ceremony of Les Miserables and were also seen dining at Spago in West Hollywood.

Besides, Maas also accompanied her spouse to the American Cinemateque Awards and also joined him at the Television Academy Hall of Fame Special.

Did Alexis Maas Have Children With Her Husband?

Though the couple was married for around 2 decades, they did not have any children. The couple never revealed their decision of not having any children.

However, as the fourth wife of Carson, Maas is a stepmother of 3 children, Cory Carson, Richard Wolcott Carson, & Christopher Carson. All three kids are born from Carson’s first marriage to Jody Morrill Wolcott.

Though she does not have any biological children, she has not mentioned having any regrets. In fact, she shares a great relationship with all her stepkids.

At the time of Johnny Carson’s death, he was reportedly worth around $300 million. Well, after his death, his wife Alexis became a legitimate owner of a large sum of Johnny’s wealth.

As per the reports, the total fortune was legally divided into all his three sons and Alexis. Well, she reportedly went on to receive a total of $156 million.

She Appeared In A Documentary Series About Her Husband

Alexis Maas never showed an interest in movies or TV shows. However, she became part of a documentary series named American Masters. In the series, she appeared in an episode named Johnny Carson: King of Late Night, which was based on the life of her late husband.

Directed by the Emmy award-winning director Peter Jones, the documentary series was nominated for two Emmy Awards. Not only this but it was also nominated for the Writers Guild of America Award. Her work in the series also received appreciation.

Where Is Alexis Maas Now?

No doubt, Alexis spent two blissful decades with her late husband. But everything seems to have changed ever since the death of her spouse. She has completely kept herself away from the limelight.

In fact, it has already been years since she made a public appearance. Her only appearance was in 2012 when she appeared in the documentary series. Besides, she is also not on any social media platforms as of yet.