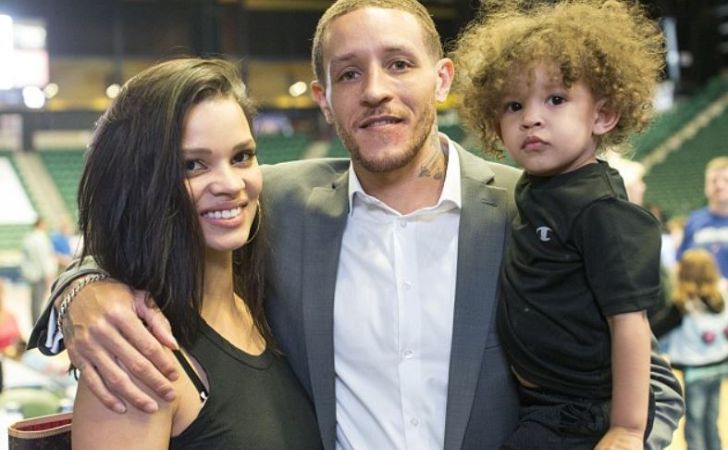 Caressa Suzzette Madden is the wife of a popular former NBA player, Delonte West. While she initially gained enough attention as the wife of a veteran basketball player, the subject matter of her being featured in the media has changed lately.

With Delonte getting into severe drug addiction and facing a tragic professional and financial downfall, Caressa too has suffered as a wife. Well, how is her life at present? Here, we have brought to you all you wanted to know about this celebrity spouse Caressa’s career, family details, children, and a lot more.

The beautiful Caressa Suzzette Madden was born on May 13, 1988, in Dallas, Texas, in a Christian family. She spent a large part of her life in her hometown until she moved to Washington with her husband.

As we mentioned, Caressa is primarily known for her marital relationship with her husband Delonte West. The couple first met at their mutual friend’s party amid the NBA lockout of 2011.

The duo instantly clicked at their first meeting and continued dating despite Delonte’s deteriorating financial conditions. Shortly after their relationship began, Caressa moved to West’s mansion by the Potomac River in Fort Washington.

Amid the worst financial conditions, Delonte proposed to pregnant Caressa with a piece of string. Stating his love for his then-girlfriend, he said,

The couple married in 2013, in a low-key wedding ceremony. Well, shortly after their marriage, Caressa gave birth to their first child, a son Cash West. They also reportedly have another son, however, they have not revealed his name yet.

34 years old Caressa got pregnant with her first child soon after she met Delonte. But she went through a rough phase, resulted primarily because of poor finance.

Though she moved into Delonte’s mansion in Washington, Delonte, who was having a difficult time continuing in the NBA because of his arrest for the possession of a gun, could not afford much of luxury for her.

Further, with NBA lockdown in 2011, Caressa Suzzette Madden’s husband Delonte had to do odd jobs and couldn’t afford heating for the house. However, to get through the harsh cold, the couple managed portable heaters and heated water on the stove to take bath.

Madden Spouse Was Married In The Past

Caressa Suzzatte is not the only wife of Delonte. Before her, then-Cavaliers player Delonte was married to Kimberly Ashley Awad. The two reportedly eloped and married in July 2009 in Nevada, as per the Clark County records. Moreover, the couple also dated for a while before they finally decided to tie the knot.

But unfortunately, with Delonte facing charges for gun possession, their relationship turned sour. They separated just two weeks into their marriage. The divorce was finalized in 2010.

Well, as of 2020, Delonte’s ex-wife Kimberly lives in New York and works as a director of business development at Condé Nast.

From $16 million to a Broke Man

Caressa’s husband Delonte had it all in his short-lived career. From owning $16 million in net worth to losing it all in a very short time, he had it all.

If reports are to be believed, Delonte lost a large part of his wealth in his divorce settlement with his first wife Kimberly. Shortly after the split, Delonte was also diagnosed with bipolar disorder.

Moreover, he also got into drug addiction and a few legal charges for the possession of ammunition which took a toll on his finances. His riches deteriorated so much so that he was even spotted begging nearby a gas station in Dallas, Texas, in September 2020.

Fortunately, the Dallas Mavericks owner picked him up and admitted him to rehab. Well, the former basketballer Delonte seems to have recovered to much extent and was spotted playing indoor basketball in a Twitter post on November 5, 2020.

Delonte West was back on the court this week. 💙 👊

Where is Caressa Suzzette Madden Now?

While Caressa was together with Delonte a long way through ups and downs. However, as far as her whereabouts in the present are concerned, there hardly seems to be any update.

If unconfirmed news is to be believed, she has reportedly moved back to her hometown and lives with her mother and children. Hopefully, she soon makes a public appearance.

Despite being successful and famous, Caressa has maintained complete privacy when it comes to her wealth. So far, she has not revealed her net worth.

On the other hand, her husband Delonte West’s net worth sits at a massive $16 million at present.