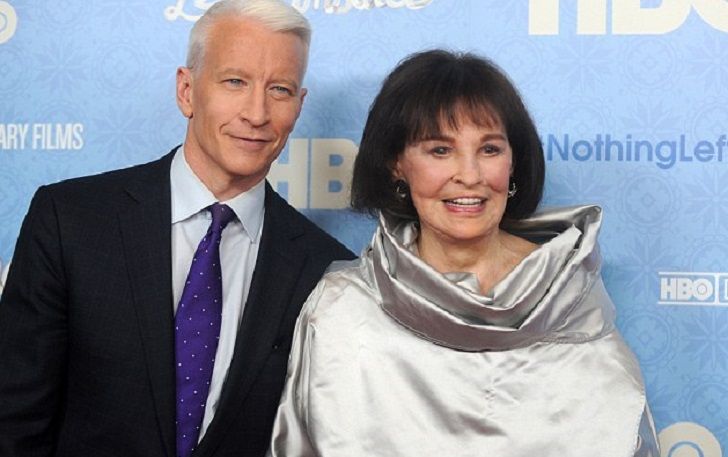 Christopher Stokowski is a famous star kid who is the son of late celebrity couples Gloria Vanderbilt and her then-husband, Leopold Stokowski. His late father Leopold was one of the finest conductors, while his late mother Gloria was the most successful denim designer. She also had a splendid career as an author and actress. From his parents’ marital relationship that had spanned about a decade, Chris also has a brother named Stan Stokowski, a landscape gardener.

However, over the past several years, the younger son of Gloria with Leopold wasn’t in touch with all of his family members including his half-brother Anderson Cooper. In fact, Chris left the rest of his family at the age of 26 after his mother’s therapist, Dr. Christ L. Zois became overly involved in his relationship with his then-fiance April Sandmeyer.

So, today in this article, let’s find out if Christopher has ever reunited with his mother Gloria and his half-brother Anderson. If not, where is Christopher Stokowski now? Here is everything about his relationship with his family members and tragic break-up with his then-partner Sandmeyer.

How Old is Christopher Stokowski? His Early Life and College

Born on 31st Jan 1952, in the United States of America, Chris is now 70-year-old. As the son of two most successful parents, Chris undoubtedly had quite an affluent upbringing. Besides, as for his nationality, the star kid is an American and is a British-American as per his ethnicity.

He was shy as a child. He also had a solitary life at Bard College, a private liberal arts college in New York.

His Parents Had A Huge Age Difference

Chris’ parents Gloria and Leopold who were married in April 1945 had a tremendous age gap of about 41 years. The renowned fashion designer was only 21-year-old, whereas, her then-husband was 62-yea-old at the time of their nuptials. On 22nd August 1950, the two also welcomed their first child, Leopold Stanislaus “Stan” Stokowski (Christopher’s older brother).

However, in October 1955, about ten-year after their marriage, the two went their separate ways. The following year in August, Vanderbilt married for the third time Sidney Lumet, an American film director. Nevertheless, their relationship also ended in divorce in August 1963 with no children together.

How Many Siblings Does Christopher Have?

As we have mentioned earlier that Chris has a biological brother named Leopold Stanislaus Stokowski, the owner of a landscaping business in East Hampton. He has also been the owner and operator of New Ground Gardens LLC., in Sag Harbor, New York since Jan 1998.

He studied at Middlebury College and graduated from the college in 1970. Later on, Leopold earned his degree in painting from the School of Visual Arts, in New York.

He Has Two Half-Siblings; One Died By Suicide

Christopher has two younger half-brothers from his late mother’s relationship with her fourth husband named Wyatt Emory Cooper. His first-born younger half-brother was Carter Vanderbilt Cooper. Born on 27th Jan 1965, Carter plummeted to his death in front of his mother on 22nd July 1988 from their 14th-floor apartment.

His second half-brother is Anderson Cooper, one of the most prominent faces in the world of media. He now serves as an anchor of the Anderson Cooper  360° on CNN.

What Does Christopher Stokowski Do For a Living?

As we have mentioned earlier Stokowski was an introvert as a child. He actually never liked his mother’s fame as the star kid had to deal with paparazzi. Even at his college, Gloria’s second-born son led a solitary life and always tried to stay away from his parent’s popularity.

He also avoided using his surname and tried to carve out his own career in the music world. He used to spend most of his time at her mother’s home, playing in a band at New York’s fabled Max’s Kansas City under a fake name. While there isn’t more about his professional career, Gloria Vanderbilt’s son Christopher is a music director.

Who Is The Heir to the Wealth of Gloria Vanderbilt? Details on Christopher’s Net Worth

Since Chris’ mother Gloria Vanderbilt, the fashion designer and writer died at 95 in June 2019, everyone became curious to know about her tremendous wealth. Initially, there were rumors that Gloria’s youngest son Cooper could be the sole inheritor of his mother’s fortune that was valued at $200 million.

Later on, Vanderbilt’s will stated that her oldest son Stan would also receive her Midtown co-op at 30 Beekman Place which was worth about $1.2 million, while the rest of her estate would go to Anderson Cooper.

Meanwhile, Chris reportedly inherited a huge chunk of wealth from his parent’s fortune. And Christopher Stokowski’s wealth is $3 million as of 2022.

Does Christopher Stokowski Have a Wife?

He prefers to live a life entirely away from showbiz. And the same could be said when it comes to his love life. He also doesn’t have any social media accounts. So, as of now, there are no reports of whether or not Christopher is in a marital relationship with his wife.

He Was Once Engaged To Be Married With April Sandmeyer

Christopher was once in a beautiful relationship with his former girlfriend-turned-fiancee named April Sandmeyer, a Manhattan socialite. While there isn’t more about their early romance, the two began their dating in 1974. After some time, they got engaged and then moved to Europe, dividing their time between Britain and Stokowski’s estate located in the South of France.

Soon after, they also started planning for their marriage. Unfortunately, things didn’t go as per their plan when Chris’ father Leopold Stokowski, then 95 died in Sept 1977. His mom later married Sidney Lumet (1956 to 1963). And for the fourth time, the fashion designer tied the knot with Chris’ stepfather Wyatt Emory Cooper. Their marriage which lasted 15-year dissolved in his death in 1978.

At some point, Sandmeyer was agitated by Zois’ interfering with their love life. He once even made rumors that April separated from Chris. The socialite who still found it hard to delineate about what actually happened at that time said in an exclusive interview with Mail in April 2016,

“Christopher was the love of my life.”

“But I was so devastated when I discovered what Zois had done that I felt I had no choice but to break things off with Christopher. I can’t tell you what Zois said, it is just too personal. But I was heartbroken.”

Soon after Chris knew about his mother’s therapist nature, the then 26-year-old broke away from his mom. He then started living in an apartment on East 44th Street to be closed to her. However, his effort to win her back didn’t work as April always denied seeing him.

As a result, Chris cut ties with his mother and the rest of his family. The only reason why the famed star kid abandoned his popular family is his far-fetched dispute with his mom’s therapist.

Has Christopher Stokowski Ever Come Back?

He abandoned his wealthy family in 1978 and then became a recluse for decades. But apparently, there has been news about his reuniting with his family since the documentary ‘Nothing Left Unsaid’ about Vanderbilt’s life was released in 2016.

Christopher’s half-brother Anderson Cooper told Page Six, “Yes, we did reconnect and reconcile after the film.”

Meanwhile, their uncle, Harry Cooper, also said that Chris and Cooper reunited and that even their mother Gloria had also seen three times with her long-lost son since the film was released. In fact, Chris’ former partner Sandmeyer played a key role in reconnecting Chris and his half-brother Cooper.

So, as of now, Chris seems to have a healthy relationship with his family member including his half-brother Anderson.