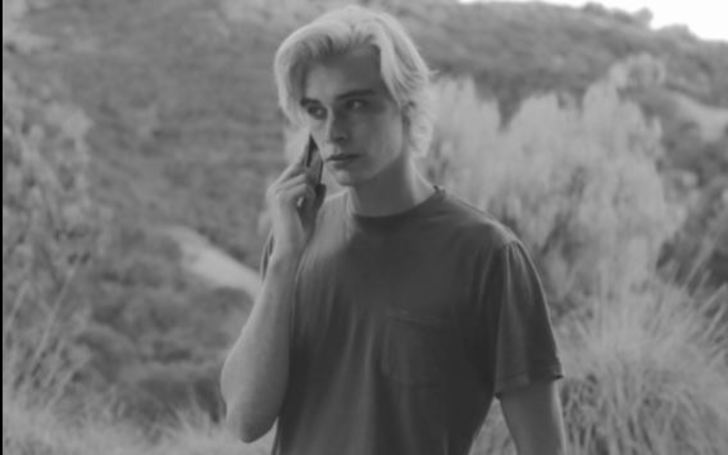 Dane Luke Majors is the son of actor Lee Majors who is known for portraying Colonel Steve Austin in ABC’s science fiction action series The Six Million Dollar Man. Lee’s son, himself has had a few acting projects to his name.

He, however, in the recent, has become a sort of a passe with no updates at all. Although not as much of a big name as his father, Dane’s name often gets surfaced with people’s once-in-a-lifetime curiosity with respect to the twin sons of the actor.

So know what the uproar is really about; read if Dane Majors is someone who is really worth knowing and if he has a legacy to tell. Also, know about his personal, professional, his current whereabouts all in the article below.

Luke was born on October 22, 1992, Thursday at a hospital in Fort Lauderdale, Florida.

Majors was born during his father, Lee’s third marriage with the Playboy Playmate Karen Velez.

His paternal grandparents, Carl and Alice Yeary, were both killed in separate accidents. The grandfather lost his life in a work accident 5 months prior to Lee Majors’ birth and his grandmother met her fate in a car accident a year later.

In 2017, he had a minor role as Ryan in Benjamin L. Brown’s horror film Severed Road (2017). He also played Luke in the 2020 thriller Alone by the director, Vladislav Khesin. Dane has also appeared as Young Charlie in a short movie called, To The Moon.

Majors’ Siblings Are Also Into Acting

He has an older sister, Nikki Loren, and a twin brother, Trey Kulley. His sister, Nikki posed for a “Playboy” Cyber Club pictorial called “Playmate Daughters” in March 2008. She also used to be an actress known for her work on P.S.I. Luv U (1991) and Keaton’s Cop (1990).

Luke’s twin brother Trey is a model at The Source.

Dane also has an elder half-brother named Lee Majors Jr or Lee Majors II. He was born in 1962 through Lee’s first wife, Kathy Robinson. Lee Jr has appeared alongside his father in movies such as The Return of the Six-Million-Dollar Man and the Bionic Woman (1987); in the film, Dane’s half-brother plays the character of Jim Castillan.

The first son of Lee Majors is also a cast in other films including Bionic Showdown: The Six Million Dollar Man and the Bionic Woman (1989) and the Norman Apstein directed Ice Cream Man (1995).

Lee and Karen married in September 1988 and moved to Florida, where they had three children, including Dane. They though parted ways in 1994, after six years of marriage. Before Lee, Karen was married to Vic Ventimiglia Jr. (3 June 1999 – 1 August 2004).

Luke’s father, on the other hand, has been married four times, including Karen, and has four children.

Dane’s mother was a Puerto Rican model and a Playboy’s playmate of the year, Karen Velez. Velez was born on January 27, 1961 (age 60 years) in Rockville Centre, New York.

Velez appeared in several “Playboy” videos and special edition publications. The mother of three was the cover model for the first issue of “Playboy’s Playmate Review”.

As mentioned Dane’s dad, Lee Majors has had several memorable series and film credits. He had a major breakthrough while portraying the character of Heath Barkley in the Western series The Big Valley (1965–1969). In addition to his Colonel Steve Austin in The Six Million Dollar Man, Lee is also famous as Colt Seavers in ABC’s action series The Fall Guy (1981–1986).

Lee Majors and his ex-wife, Farrah Fawcett were the inspiration behind the song “Midnight Train to Georgia.”

In like manner, the title of the Beastie Boys song “Lee Majors Come Again” is a reference to Dane’s actor father.

Is His Father Still Alive?

Lee Majors is in the cast of an upcoming film Renegades from the director/producer Daniel Zirilli (of Acceleration, and Invincible).

The film is a London-set revenge movie. Lee will play alongside the likes of Danny Trejo (Machete), Michael Paré (Gone), Ian Ogilvy (We Still Kill the Old Way), and Tommy ‘Tiny’ Lister (The Fifth Element). The film is set to hit theaters in 2022.

Since 2002, Dane’s father is married to the actress and model Faith Majors (nee Cross). Cross is 35 years younger than Lee.

Where Is Dane Luke Now?

Since the 2020 film, Alone, Dane hasn’t had that many notable projects, especially when it comes to movies or TVs. The son of Lee and Karen appears as if he’s completely ghosted himself with no significant presence in social media either.

In fact, in the last few years, the Fall Guy actor’s son has become a bit of a mystery. His Facebook, Dane Majors, hasn’t had a post since Jan 2017. Yet by the looks of it, his last known residency was at Pacific Palisades. In like manner, he then was working at Camp Highlander.
Majors was also at the time seen a lot in skate parks although it is unclear if he was in it professionally.

Does Dane Majors Really Have A Girlfriend/Wife As Some Sources Claimed To Be?

Buzzes have been going on for a while for some time regarding Majors’ love partner with all claiming that there might be a name. So how much truth do the statements hold?

Apparently, considering the concealed and out-of-reach life of Dane, the answer as to whether he is dating a girlfriend is rather an unavailing query. The not-so-famous or otherwise, difficult to have the track of celebrity, Luke Majors has merely let headlines grab even a piece from his personal sphere.

Nonetheless, taking Luke’s age and his smoldering physique, he could hardly be a bachelor; something that is highly unlikely in his case. Needless to say, there’s always a bleak chance of such a guy with no girlfriends or a romantic partner of some sort.

Still, it might be a while before the son of Luke and Karen decides to go on sharing about his intimate activities.